Greg King is tired of seeing Filipino-Americans take a back seat in the immigration debate — tired of attending civil rights rallies and marches in Minnesota and never seeing other Filipinos involved. “Filipinos have a lot of stake in this,” King said. “I have relatives in the United States who are undocumented, but by in large we let Latinos bear the brunt of that. That’s really not fair.”

So King decided to do something about it; he started Filipinos for Immigrant Rights in Minnesota (FIRM) to give voice to Filipino-Minnesotans in the increasingly divisive national debate over immigration in the U.S.

The immigration rights group will participate in their first official event Friday, as part of a series of rallies and marches being held across the Twin Cities and nationally in protest of President-Elect Donald Trump’s inauguration and the anti-immigrant rhetoric used during his campaign. More than 60 organizations have signed on to the Twin Cities march — including FIRM — which will start at Nicollet Avenue and East Lake Street today at 2 p.m.

“As a Filipino-American, we have a lot of people who do have stake in this [debate] and want to have a voice,” said King.

According to a 2014 Pew Research study, Minnesota hosts about 95,000 immigrants living illegally in the state.

And though more than half of Filipinos living in the state were born outside of the U.S., King said he doesn’t believe too many Filipinos are living in Minnesota undocumented. Even so, he says, it’s still important for the Filipino community to stand up for those who are, especially under the new incoming Trump administration, which has vowed to ban Muslims from entering the country and build a wall between the U.S. and Mexico.

Meg Layese, who moved to the United States from the Philippines in 1972 to study agriculture at Cornell University, said she also has undocumented relatives living in the country. But Layese said because most Filipinos come to the United States for education, not as refugees, and are doing well financially, they’re often overlooked when it comes to the immigration debate. “That’s probably why Filipinos are not too visible,” Layese said.

But FIRM President Maryam Shapland said just because many Filipinos are doing well and aren’t protesting at rallies doesn’t mean there isn’t a need for Filipinos to get involved in the debate. “As an immigrant group that is relatively successful, we are the ones who really need to stand up and be part of the movement and not be silent anymore,” she said.

Shapland moved to the U.S. in 1990 at the age of 13, but didn’t become a citizen until she was 24. During that time, she said, she just wanted to keep her head down, keep working hard and not ruffle too many feathers before she became a citizen. Many Filipinos feel that way, she said, and they’re worried speaking out against the government or larger systems will cause them trouble or even cost them their citizenship. 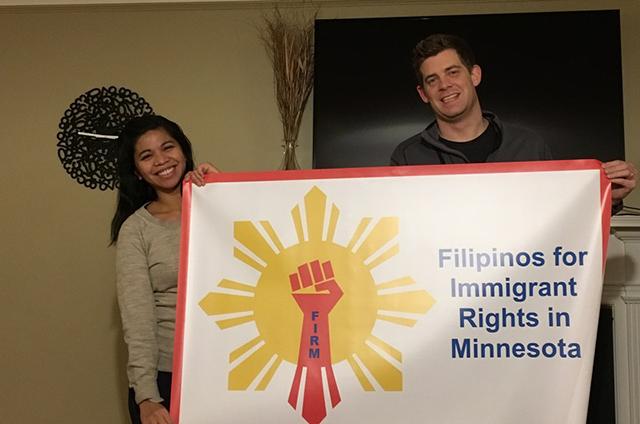 Courtesy of FIRM
Maryam Shapland and her husband Jim hold up the organization’s new banner, which they’ll carry during Friday’s events.

But with Trump taking office, Shapland said, she felt compelled to vocally protect her rights, and the rights of other immigrant groups who may find themselves in compromising positions under the new administration’s policies. “I’ve lived in Minnesota for the past 27 years and I’ve never felt more like ‘The other’ than I did right after the election,” she said. “We have to stand up and if we don’t do it now, I can imagine his administration steamrolling over all of us.”