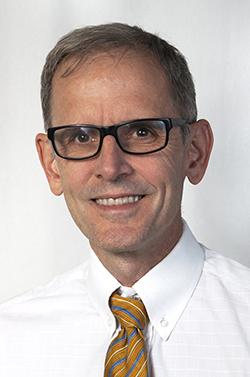 Larry Yungk, a Washington-based senior resettlement officer for the U.N. Refugee Agency, traveled to Minneapolis recently for the opening of a photo exhibition called “Where the Children Sleep” – a display of photos of Syrian refugee children by Swedish photojournalist Magnus Wennman.

The agency is co-sponsoring the exhibit at the American Swedish Institute, which is featuring others – including a video project on recent Nordic immigrants – throughout 2017 on the theme of migration, identity and belonging. First shown in Sweden, the photos will be on display at the insistute until March 5.

While in Minneapolis Yungk sat down with MinnPost for a conversation about resettlement in Minnesota – which has taken in about 20,500 refugees over the past decade – and around the globe.

The conversation has been edited for brevity and clarity:

MinnPost: There must be other photographers or artists highlighting refugee issues, but you came to Minnesota for this exhibit.


Larry Yungk: We were invited to come up here and participate in this and we are happy to do that. We think it’s a great way for people to sort of understand the situation, particularly of Syrian refugees, [though] I think [the exhibit] is representative of all refugee situations. We are so often speaking (about refugee resettlement) in huge numbers and I think that’s very hard for people to digest at times. This really is just the opposite – getting in personal, looking at individual children.

MP: Minnesota has long played a role in refugee resettlement. Does the state have a reputation with your agency in terms of being a good place to work with?

LY: I have been doing resettlement since 1980 and with the UN since ’87, and you can go back and look and really see that each year Minnesota is normally one of the top 10 or 15 resettlement states – and, given its population, its per-capita level is pretty high. It’s been fairly consistent over the years. It’s kind of interesting because the number that come to Minnesota – being here at the American Swedish Institute – is very close to what Sweden does each year. Around 2,000 is generally about what the Swedish quota is per year, so to me that was sort of an interesting parallel.

MP: As you look ahead, what is your biggest concern for refugee resettlement around the globe?

LY: There are never enough places to meet the need. So a big job that we’ve had over the years is to try to get new countries to do resettlement, particularly in Europe. We have seen in recent years that the Nordic countries like Sweden, Finland, Norway, Denmark have always traditionally taken refugees for resettlement. But what we haven’t seen, and what we are now seeing, are countries like Germany, the UK, France actually initiating resettlement.

We also look, to some extent – though the numbers wouldn’t be that high – to certain developing economies like in South America – Brazil, Argentina, Chile would be ones.  We do some very small resettlement and continue to try to build it up in places like (South) Korea and Japan where you have advanced economies. The challenges there are that, often, these are places that don’t traditionally even have immigration that much.  When you come to the U.S. or Canada or Australia or even South America – Argentina, Chile and Brazil – those are countries that have a history of immigration.

MP: So, what are the challenges for these (emerging) host countries?

LY: The U.S. has decades of history (with resettlement) and they have specialists that know how to go overseas and interview and they have all of the systems in place to do this, whereas a new country doesn’t have any of those systems.

[For] countries that aren’t traditionally resettlement countries, it’s getting people used to this sort of more multicultural aspect. In the U.S. – even though there are tensions at the moment, maybe, over some of these things – there are a lot of differences that nobody would notice that would still be an issue in another country. Whether you are Swedish or Norwegian or Italian or Greek or something, in the U.S. probably people don’t make much of it. People might notice if you are Somali.

In other countries, if you are just not of that nationality it is kind of like, “All right, how do we bring this person in?” How does integration work into some of these cultures? [Some] countries, I think, have a very sincere interest in doing this, but it’s having to learn, “How do we accommodate that?”  Japan would be a good example – a country that I think very sincerely would like to be doing more resettlement and yet it’s a challenge.  Japanese families and histories go back thousands of years. There’s a thing of being Japanese. If you bring a refugee there, how do you blend that with being Japanese?

MP: What can people in Minnesota do to bridge that divide if they feel they are not really connected to these newer refugee groups – or newer immigrant groups?

LY: There are usually lots of opportunities. One would be just as straightforward as coming to an exhibit like this and beginning to try to learn a little bit more about the background of people so that when you encounter someone, you have some context to put that into. I think in your day-to-day encounters, you may begin to notice people that you didn’t see before. I think it’s OK to say, “Gee, are you from Somalia?” or “Where are you from?” and to just say hello and to just connect. And then, of course, through things that people belong to – whether that is churches or other organizations or PTA or schools – to try to be the person who sits with the newcomer and just tries to introduce yourself and connect. You get to know individuals. And in doing that, you are helping, also, those people to get to know Americans.

MP: I would be remiss if I didn’t ask you about the (U.S. presidential) inauguration and what your agency thinks about whether our American policy toward refugees is going to change a lot based on the rhetoric in the campaign.

LY: We have had an office in Washington since the early ‘80s. We’ve worked with multiple administrations. We certainly approach working with this one as we would any and trying to find out what the issues are to see what issues, questions, things they have for (the U.N. Refugee Agency) and … to see where those areas (are) where we can move forward.

Once we are able to see what the proposals are in more detail we will be in a better position to assess where things are going. Certainly, the U.S. has a long history of being a leader in refugee protection and assistance, resettlement and I think that was true across parties and across generations. So I think our feeling is that there will continue to be common ground here.