As an oral historian, Tea Rozman Clark understands the power of the personal – how the sharing of ordinary experiences or reflections can connect people who might otherwise seem very different.

“If you want to break stereotypes, you can’t only share the unknown. You have to share a commonality,” said Rozman Clark, the executive director of Green Card Voices, a multimedia organization that helps immigrants tell their stories. “That builds empathy.”

Green Card Voices plans to publish its second book of essays, written by Fargo students, in March and its third book in the series, by St. Paul students, in June.

The books are a part of Green Card Voices’ work to strengthen ties, through storytelling, between immigrants and their new neighbors. The group has collaborated with the American Swedish Institute, for instance, on a current exhibit of recent immigrants from Scandinavia – a reminder that immigrants are coming to Minnesota from many parts of the globe, not only places of civil unrest.

To create their stories, students first sit for interviews with Green Card Voices professionals, answering a handful of questions about their native countries and their new lives in Minnesota. The students then edit the transcripts into essays. Each story is accompanied by a picture of the student, as well as by a link (embedded in digital versions of the book) to a video clip of the interview.

One of the students profiled in the first book, Jennifer Nunez Paz, writes about being depressed after coming to the United States from San Pedro Sula, Honduras.

“After one week, I wanted to go back to Honduras. I missed all the food; the food had a different taste here. … I felt alone and like a different person,” she writes. 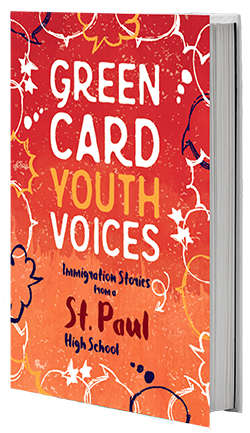 Eventually, school started to click and Paz began playing soccer and going to church. “Sometimes my stepdad asks me if I want to go back to Honduras,” she writes. “I say, No, I don’t want to go back right now.”

Another student, Quan Guan, writes about life in Minnesota after coming to the United States from Fuzhou, China, where he had studied diligently.

“Then I was in shock because I couldn’t speak and understand English even though I had studied English in China for four years,” he writes. “Four years of hard work – just like a bubble, it was gone.”

Guan, however, like Paz, gradually began to feel at home and now has dreams of becoming an engineer.

The books, designed for high school courses or other study groups, include study guides, glossaries and links to other resources.

Ultimately, Rozman Clark said, the goal of the series is to give young immigrants the chance to control the narrative about their own experiences. While books have been written about immigrants in the Midwest, she notes, the Green Card Voices books are written by immigrants.

“It really honors the first-person narrative,” she said. “We wanted to empower immigrants to let them share their voice, but in the way they want it shared.”