For many Somali-Americans in the Twin Cities, there has never been a federal official like Andy Luger, who attracted both effusive praise and sharp criticism from the community for his service as the U.S. attorney in Minnesota.

For the three years he served as the state’s federal prosecutor, Luger walked a fine line — between building relationships with some members in the community and prosecuting others on terrorism-related charges.

Since Luger announced his resignation on March 10 — he was among the 46 holdovers from the Obama administration that new Attorney General Jeff Sessions asked to resign — leaders in the community have been left to wonder not just if, but how much, things will change under a U.S. Attorney appointed by President Donald Trump.

“He was a guy that anybody could reach out to,” said Abdimalik Mohamed, a former community outreach specialist at the Justice Department. “He would answer anybody’s call. I don’t know if that’s going to be the case moving forward.”

On Thursday night, Luger made his first public appearance since leaving office at Minneapolis’ Temple Israel, where he spoke to hundreds of people about his work as a prosecutor and his experiences countering extremism and hate crimes in the state.

Prior to his talk, MinnPost sought him out at the synagogue and asked him to speak about the relationship he established with the Somali-American community. But he declined to comment, saying that he wasn’t ready to speak to the press “until the dust settles.”

When Luger took the stage, though, his talk hinted at his unique relationship with the community, referencing dozens of activists, religious leaders and parents. “They’ve become good friends,” he said. “They’re great leaders in our community.”

Those relationships began in the summer of 2014, just a few months after he was sworn in as the federal government’s chief law enforcement official in Minnesota. The effort was initially met with skepticism by many Somali-Americans — a community that had become used to interacting with federal law enforcement agencies only during criminal investigations.

Yet Luger soon became a high-profile presence in the community, regularly engaging with Somalis in mosques, restaurants and community centers, both publicly and behind closed doors.

One of the keys to those engagement efforts, says Saciido Shaie, founder of the Ummah Project, an interfaith nonprofit in Minneapolis, was Luger’s approach. He didn’t just lecture to them at meetings. He was sitting down and sharing meals. But in each meeting he had with the community, Luger asked participants about challenges they faced — and what he could do to ease them.

“His job was to prosecute,” said Shaie. “But he did his job different than those before him: He engaged the community really well.”

Luger talked about that engagement at the event, which featured Chicago-born Christian Picciolini, a former neo-Nazi, who chronicled his experience in the white supremacist movement and how young people get recruited to extremism. Luger spoke of how he worked on combating another kind of extremism recruitment in the state.

“We began to build coalition to stop terror recruiting in Minnesota,” he said. “It wasn’t easy. It isn’t easy.” So he helped form a Somali American Taskforce to work with law enforcement and government agencies “to build programs to highlight Islamophobia and to fight terror recruiting.”

He continued: “We also began working with a group of parents whose sons were defendants — parents who spoke directly to the member of the community about how their children were recruited.”

Mohamed and other Somali leaders told MinnPost that Luger could have simply limited his work to criminal investigations and prosecution. But “he always wanted to do something for the Somali community,” Mohamed said of Luger. “And the crazy thing is that it was not in his job description. So, he went out of his way.”

Not long after Luger became U.S. Attorney, a group of religious leaders told him that the St. Anthony Village City Council had rejected a proposal to establish an Islamic center in the city. Soon after, Luger’s office filed a lawsuit against the city, which led to a settlement that allowed the center to be built.

“In one of my proudest moments as a United States attorney, I stood on the stairs of that building with the mayor on one side and the imam on the other side,” said Luger during his Thursday speech. “The mayor and the imam shook hands and the mayor said to the imam, ‘Welcome to the city of St. Anthony.’”

Today, the mosque — known as Abu-Huraira Islamic Center — stands inside the former Medtronic headquarters in St. Anthony as a worship place for hundreds of local Muslims.

‘They were skeptical about him’

And yet, in Minnesota’s Muslim community, Luger is most remembered for bringing the controversial Countering Violent Extremism (CVE) initiative to the Twin Cities, and for indicting 10 Somali-American men, who were convicted last year of conspiracy to commit murder overseas — one of the biggest terrorism cases in the U.S.

In 2014, ISIS captured major cities in Syria and Iraq and declared an Islamic caliphate, and the group was romanticized by hundreds of American Muslims who left — or tried —to join the group. Among them were more than a dozen Somali-Americans from the Twin Cities, including Yusra Ismail and Abdi Mohamud Nur, who were among those confirmed to have joined the group in the Middle East.

Luger and his team at the Justice Department began investigating the disappearances, while at the same time trying to understand what drove the men and women from their homes and to places where they did not know the language and had no historic ties. “The terror group ISIL was recruiting young Somali Minnesotans to fly to Syria,” Luger said. “Parents, families, community were deeply concerned.”

In search of answers, Luger held scores of listening sessions with religious leaders, elders and parents in various Twin Cities’ neighborhoods. These meetings, in part, were meant to reduce the brewing tensions between the community and federal law enforcement, which was actively investigating the ISIS recruitment pipeline. Though federal officials confirmed at least 15 people left the state to join ISIS, nobody in the community wanted to publicly discuss the departures. As a result, many Somalis felt the ISIS recruitment narrative was a bogus claim — one that gave law enforcement the chance to harass the Muslim immigrant community.

To dispel that misconception, Luger would explain the magnitude of the cases and why his office was investigating. “I want you to know this is not an attack on the Somali community,” he told a group of Somali-Americans at a 2014 engagement event. 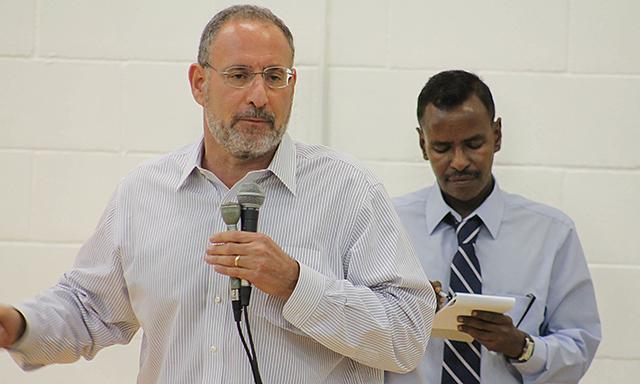 Oftentimes, he tried to find ways to relate to those who came to his events: “I have two children and if somebody was recruiting my children to go overseas and die, I would want the people who were doing that to be caught and put in jail,” he said at the event. “My children are no more valuable than your children.”

Luger’s engagement with the community made him a popular figure among some in the community, longtime community leader Abdirizak Bihi said. “He really invested a huge amount of time in engaging Somali-Americans and earning their trust, while also doing his work,” Bihi said. “He would engage anyone whether that person likes him or calls him names.”

Yet that level of engagement — with a population that had never had regular communication with any federal official — put Luger “in a difficult position,” Shaie said. Many were skeptical about why a prosecutor would continue talking to a community that was being investigated for connections to terrorism. “Some thought he was taking advantage of them,” Shaie added. “A lot of people were confused. They were skeptical about him and his work. They were scared.”

‘He should be appreciated’

That skepticism seemed to be justified in the fall of 2014, when Luger introduced the controversial federal pilot program, Countering Violent Extremism, which he said would bring $5 million to the Twin Cities to support organizations that would provide services to Somali-American youngsters who — as some people put it — were susceptible to radicalization and terrorist recruitment.

After the program was introduced, Luger’s involvement with the Somali community intensified, as many activists and nonprofit leaders took turns to see Luger and showcase service programs tailored to the CVE grant requirements, which were aimed at creating and expanding efforts to counter recruitment and radicalization in the Twin Cities, as detailed in the program’s application process.

Meanwhile, other leaders encouraged people to avoid the program, saying it stigmatized the Muslim community and might be used to gather information about participants for surveillance purposes.

The community became starkly divided over CVE — so divided that when Luger led a delegation of some pro-CVE leaders to the White House in early 2015, a group back in Minnesota organized a press conference to raise concerns about the same initiative. “The CVE program isn’t just based on a flawed premise, it’s also counterproductive when it comes to the very issue it seeks to address: youth radicalization,” wrote several Twin Cities activists in an op-ed against the program that appeared in MinnPost. “In fact, if history is any indication, the CVE will lead to more discrimination and more civil rights abuses. We can’t address security issues through a program that seeks to further marginalize, alienate and stereotype Somalis.”

Yet Mohamed, the former DOJ employee, said many leaders of the community actually asked Luger to secure funding to combat radicalization among young Somalis.

“They told him there is a problem and they have the solution, but they don’t have the resources,” he said. “He went out of his way to look for the resources. He should be appreciated for what he has been able to do … to help the Somali community.”

Why many in the Twin Cities’ Somali community have such mixed feelings about former U.S. Attorney Andy Luger