The latest study on Somalis in the United States supports a theory that nearly everyone in the community has heard before: that Somali-Americans in the Twin Cities are better integrated and more influential than their counterparts anywhere in the country.

It was a theory that Stefanie Chambers, an associate professor at Trinity College in Connecticut, first heard in anecdotal form in 2012 when she was conducting fieldwork in Columbus, Ohio, for a book chapter about minority mayors in majority-white cities.

Chambers, who studied at Ohio State University in the 1990s, had noticed a radical demographic change in Columbus, which has drawn tens of thousands of Somali-Americans in recent decades, making the city — behind the Twin Cities — home to the second-largest Somali population in the country.

“The change was so interesting and visible,” Chambers told MinnPost in an interview. “I could recognize the Somalis and I could see that there was a change. So, I got very interested in when that happened and why.”

That interest led the political scientist to come up with a research project investigating how Somalis are politically incorporated in Columbus. During the research process, Chambers said, several respondents from the community there referred to the Twin Cities as a place where “things are better” for Somali-Americans.

“I wanted to see if there were in fact differences,” she said, “and more importantly, wanted to come up with policy recommendations that policymakers could implement to increase incorporation of Somalis in the various communities” throughout the country.

In 1991, after the civil war displaced millions of Somalis, many ended up in Minnesota, Ohio, Virginia and other states across the United States through the federal Refugee Resettlement Program.

Despite their geographic location, Somalis in various cities and towns in the U.S. often remained in constant communication, exchanging information about places with good jobs, safe neighborhoods, reliable transportation and support service programs for refugee and immigrant families.

As Chambers writes, the Twin Cities eventually became the most desired destination for many new Somalis because of its “positive track with refugee resettlement,” thanks to the service programs the state created when the Hmong community began to arrive in the 1970s.

Somalis who lived in other places — including Virginia and San Diego, which boasted the largest Somali populations before the mid-1990s — began moving to the Twin Cities in search of employment, a lower cost of living and affordable rental housing options, the book notes.

By 1994, Chambers states in the book, Columbus had become another well-regarded destination for Somali-Americans.

“Somalis who originally settled in Columbus shared news of job opportunities and housing affordability,” Chambers writes. “Later, waves of secondary migrants told friends and relatives in other American cities of their improved living situations in Columbus, and the region became a popular new destination.”

Though the majority of Somalis arrived in the U.S. about two decades ago, others had come in the ‘70s and ‘80s as students, military trainees and diplomats, who later extended their stay when political turmoil began to brew back in Somalia years before it erupted in chaos and anarchy in 1991.

Today, most of those earliest arriving Somalis live in the Virginia area, New York, San Diego and other West and East Coast cities — and often hold professional jobs with international organizations, government agencies, public institutions and in the private sector. 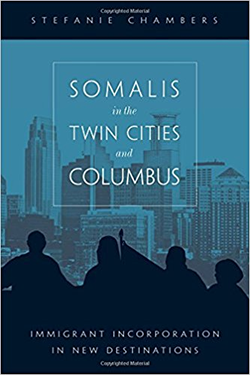 Most Somalis in Columbus and in the Twin Cities, on the other hand, came to the U.S. around the same time, had spent some months or years in refugee camps in Africa and often hold low-skill jobs.

Yet Chambers found that Somalis in the Twin Cities are more engaged and more influential in their community, both socially and politically. In local politics, for example, Ilhan Omar was elected to be a state legislator last year, while, in 2013, Abdi Warsame became the first Somali-American Minneapolis City Council member.

There’s also Siad Ali, who’s now serving as a Minneapolis Public School board member, and Abdi Sabrie, who holds the same post in Mankato. In addition to that, other Somali-American candidates have run credible campaigns for City Council seats in St. Paul, Rosemount and St. Cloud.

In Columbus, there is none of that, Chambers said.

“One of the factors is that you have an electoral system in the Twin Cities that allows underrepresented groups a chance at winning office,” she added. “For example, you use a ward system … where if someone wants to run, he or she would run for a particular ward.”

Columbus, on the other hand, has an at-large electoral system — which means that anyone who wants to compete for a seat on the school board or the City Council has to gain votes from residents across the majority-white city.

“And that’s an electoral technique that is known to make it very difficult for underrepresented groups, particularly communities of color, to get elected to office,” Chambers said. If “you have somebody who’s an African-America, Somali-American running for office, they have a very low chance because of what we call ‘racially polarized voting’ of getting elected to office.”

Though the Somali-American community in the Twin Cities has earned a reputation for making a mark in state and local politics, however, that political engagement hasn’t really changed the economic reality of the community, Chambers found.

Overall, Somalis in the Twin Cities are experiencing similar economic struggles as those in Columbus. “The median Somali household income level is staggeringly low, nationally and in the cities under investigation in this project,” Chambers states in the book. “Poverty remains a major barrier for income incorporation for Somalis.”

Still, the Twin Cities’ Somali community has better chances to improve their lives, compared to those in Columbus, Chambers added. That’s because, she said, Minneapolis and St. Paul have foundations that prioritize supporting Somali community organizations and individuals with innovative projects.

“Philanthropic support has been a real asset to Somali community groups in the Twin Cities,” Chambers said. “They have gone as far as coming up with programs and then having outreach to Somali organizations encouraging them to apply for funds.”

Why the Somali community in the Twin Cities is so much more politically successful than the one in Columbus, Ohio