When he was growing up in Stockholm, Klas Bergman devoured the novels of Vilhelm Moberg, who wrote famously, in his “The Emigrants” series, about Swedish pioneers making their way in Minnesota. Working as a journalist decades later, in the 1980s, Bergman traveled to Minnesota to cover the farm crisis and the presidential campaign of favorite son Walter Mondale.

For years, while he worked in Washington, D.C., Rome, Belgrade and other places around the world, Bergman held on to the idea of one day returning to this Midwestern state for a closer look. He has finally done so. In his book, “Scandinavians in the State House: How Nordic Immigrants Shaped Minnesota Politics,” Bergman focuses his lens on the progressive political legacy forged by 19th- and 20th-century immigrants.

“Minnesota is a state where education has long been a priority and the less well-off are taken care of,” he concludes, “where the progressive traditions of Scandinavian public policy and the social conscience of the Lutheran church combine with uniquely American demographic and character traits.”

Adding fresh perspective, Bergman also considers the future of this political legacy – and whether it will live on as new waves of immigrants put down roots in the state.

In writing the book, Bergman – who has worked as a foreign correspondent for The Christian Science Monitor and the Swedish newspaper Dagens Nyheter (Daily News) – plowed through books, letters and newspapers and also interviewed more than 90 people, many of them scholars and journalists (including this reporter).

“It was a work of discovery for me,” he told MinnPost.

The early part of the book recounts the lives of several Scandinavian leaders from the late 19th and early 20th centuries, such as Gov. Knute Nelson, known as “The Little Norwegian”; Gov. Floyd B. Olson, an emerging national figure during the Great Depression; and former U.S. Rep. Charles Lindbergh, a powerful World War I isolationist (and father of the famed aviator with the same name).

Passages from the many books written about the state’s ethnic heritage – such as Odd Lovoll’s books on Norwegian immigrants – provide historic detail, while recent interviews with scholars and journalists offer contemporary insight.

Bergman looks ahead, too

Near the end of the book, in a chapter called “On the Scandinavian Road,” he writes of places he visited as he searched for modern Minnesota, including Lindström, north of the Twin Cities, where he discovered a statute of Moberg, the Swedish author; Willmar, in west-central Minnesota, where he took stock of the city’s Somali community; and Minneota, in the southwestern corner of the state, where he read the tombstone inscriptions of Icelandic pioneers.

For Bergman – American immigrant, political junkie, Swede – the journey was a heady mix of history and heritage. 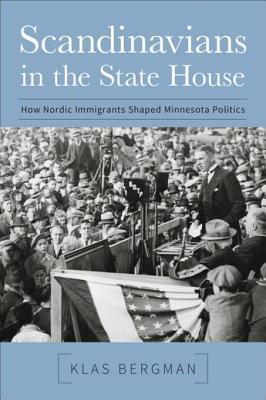 “I must say I feel at home here,” Bergman told MinnPost. “It was so much fun. I met all of these terrific people from Minnesota and learned about the state. These are my roots, too. These are my folks.” (One of his grandfathers left Sweden for the United States in the 1920s, ending up in New York and California).

The ultimate question posed by the book, of course, is whether the tradition of inclusive and shared politics that Bergman recited will hold up in the 21st century, when a new wave of immigrants are coming to Minnesota, especially Somalis and Latin Americans.

Bergman is optimistic, writing about the election of Somali immigrant Abdi Warsame, to the Minneapolis City Council, from a ward that was once the stronghold of Scandinavian immigrants.

“Most people that I talked to were hopeful that that would continue to be Minnesota’s trademark,” he told MinnPost. “Some told me: ‘This tradition is so entrenched and stable that if it changes it will take a long time.’ Time will tell.”