Two years ago, when Roselyn Lawrence started an assembly-line job at Boston Scientific, she didn’t tell the company everything about her immigration status — because she didn’t have to.

The Liberian native, after all, had the most important things she needed to keep a job in the United States: a legal residency and work permit.

On a recent day, however, Lawrence decided to tell her employer something else included in her immigration documents, which she never wanted to disclose: that the U.S. government would be terminating her work permit effective May 21.

That’s because Lawrence, who arrived in the U.S. in 2014 on a visitor visa, isn’t a full permanent resident; she extended her stay after the U.S. government designated Liberia, Guinea and Sierra Leone for Temporary Protected Status following the Ebola outbreak that killed thousands of people in the region.

But since those West African countries were declared Ebola free in 2015 and 2016, the U.S. government notified TPS holders several months ago that it wouldn’t renew their status beyond the expiration date.

That deadline is Sunday — which means Lawrence and hundreds of Minnesota residents like her will either have to leave the country or join the ranks of undocumented immigrants.

The termination plan has caused frustration and anxiety among members of the communities and immigration advocates who say the region isn’t prepared to receive people.

“Uprooting them will be very devastating,” said Abdullah Kiatamba, the executive director of African Immigrant Services. “People were transitioning from that trauma of the Ebola experience. Now, that transitional process has been disrupted by this termination.”

Kiatamba, who headed a Minnesota task force that was in part responsible for educating people about the virus in the heat of the outbreak, estimates that between 200 and 500 people — who mostly live in the northern suburbs of the Twin Cities metro — in the state will be affected by the Sunday deadline.

Lawrence, a single mother in Crystal who has been working for Boston Scientific since she obtained her work permit, says she doesn’t know where to start if she returns home, where Ebola decimated the economy. In fact, Lawrence says, the company she was working for as an accountant when she was in Liberia laid off half of its employees — 500 people — when the economy collapsed.

It’s a sentiment that Alhaaji Mohamed Bah, president of Guinea Association of Minnesota, agrees with: “There’s no way of going back,” he said, adding that many of the TPS holders lost their homes, jobs and families members to Ebola.

In recent weeks, as the end of the TPS approached, Bah said he’s been getting calls from people who fear deportation and want to know their fate in the United States.

“They said, ‘I cannot go back,’” Bah remembered. “Some of them even said, ‘It’s better for me to die because going back is like death for me; I don’t have anybody anymore.’”

Bah, Kiatamba and other leaders said they have been working with the state’s U.S. senators Amy Klobuchar and Al Franken to find a way to extend the status for the affected individuals — though they now know that it’s unlikely that will happen. 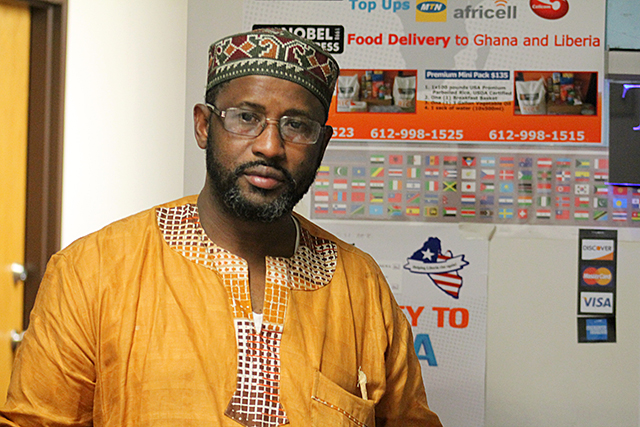 MinnPost photo by Ibrahim Hirsi
Alhaaji Mohamed Bah, president of Guinea Association of Minnesota: “Some of them even said, ‘It’s better for me to die because going back is like death for me; I don’t have anybody anymore.’”

Whatever the case, John Keller, executive director of the Immigrant Law Center of Minnesota, has been urging members from the affected communities to meet with immigration attorneys to see what legal options they might have.

“The thing we try to emphasize is: Don’t just assume that there is nothing you can do,” he said. “It really is worth meeting with an experienced immigration attorney to think through ways in which somebody might be able to extend their status or apply for a different status.”

Meanwhile, when Lawrence broke the news about her immigration status to her supervisor at Boston Scientific, she was told she wouldn’t be able to work there with an expired work permit.

That means Lawrence won’t go to work on Monday. “After Sunday, I’ve no means of working there,” Lawrence said. “That’s how bad it is!”