Twenty-six years ago, when Jacqueline Belzer immigrated to the United States, there were only two churches in the Twin Cities that served Catholics who wanted to worship in Spanish.

Back then, the Mexico native used to split her time between Minneapolis and St. Paul, serving immigrant and minority communities as a social justice organizer with the faith-based organizing coalition ISAIAH.

At the time, thousands of Latino immigrants were streaming into the state in search of better economic opportunities, and the first Spanish-language congregations in the Twin Cities — Our Lady of Guadalupe Church in west St. Paul and Ascension Catholic Church in north Minneapolis — were struggling to accommodate the influx of people, most of whom were practicing Catholics who didn’t speak English.

In collaboration with the Archdiocese of St. Paul and Minneapolis, Belzer and other leaders in the community organized programs that trained Spanish-speaking parishioners as lay leaders, people who then branched out to other churches. As a result, in recent decades the community has grown from having two Catholic churches in the Twin Cities featuring Spanish-speaking ministries to 22. Today, those parishes serve more than 25,000 worshippers each week.

But there is another issue that has remained a persistent problem for both Catholic and Protestant churches throughout Minnesota: a shortage of Latino clergy to minister to the state’s increasingly diverse faith communities.

Today, says Bradley Holt, professor emeritus of religion at Augsburg College, “Latinos have been welcomed by churches,” across the state. “And it’s not only Catholics, but also Protestants.”

These churches, Holt added, have integrated Latino immigrants into their congregations in various ways. Some Catholic parishes, for example, have opened the doors to Latinos with Spanish-language masses offered when the English liturgy is not taking place. Other churches have integrated elements familiar to Latino church-goers into their traditional services, though Holt says that it’s generally easier for Catholic churches to have separate Spanish-language masses for Latino congregations.

Among those Catholic churches that offer Spanish-language services is south Minneapolis’ Church of the Incarnation, where 85 percent of the parishioners are Latino. “We’ve had an explosive growth [in the last 15 years],” said the Rev. Kevin McDonough, a former vicar general of the archdiocese who is now the pastor at Incarnation. “The church has some 7,000 Spanish-speaking members.”

Indeed, Incarnation is busy on the weekends. On Saturdays, it provides a bilingual service, celebrated both in English and Spanish; on Sundays, it has one service in English and three separate services in Spanish.

The increase in the number of Latino church-goers has come at a time when more and more non-Hispanic white people are leaving religious institutions, Holt said. In 1992, according to the Pew Research Center, only six percent of Americans said they were religiously unaffiliated. In 2014, that number grew to 22 percent. Among millennials, it was 35 percent.

“The Catholic Church in America would be greatly reduced if it were not for Latin immigrants,” Holt said. “That’s to say Catholics as well as traditional Protestants have lost members to secularism. And in their place have come the leading people from Latin America.”

But if finding a house of worship that accommodates Latino worshipers is no longer difficult, finding one led by native-Spanish speakers remains elusive. “What we don’t have are pastors and preachers that know the language,” said Juan Linares, who worked with Catholic Charities of St. Paul and Minneapolis for 25 years. “[Native-born pastors] are asking themselves how to ministry these folks. They’re now been put in a situation where they have to learn another language.”

Even more rare is a congregation led by someone who understand the nuances of diverse Hispanic cultures. “We have a lack of leadership in the church from our own community,” Belzer said. “Some churches are importing priests from other countries; but that’s not working.”

Today, churches throughout Minnesota — both Catholic and Protestant — are working to respond to that shortage in different ways. 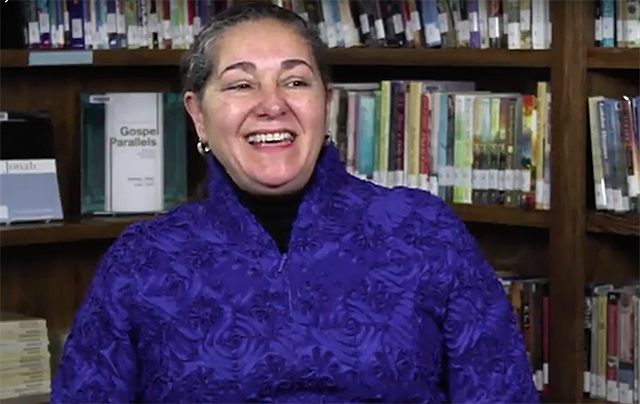 YouTube
Jacqueline Belzer and other leaders in the community organized programs that trained Spanish-speaking parishioners as lay leaders.

Years after working in the Catholic churches in the Twin Cities, Belzer left the Catholic faith to become a Protestant, eventually becoming an ordained pastor. In 2013, she founded Christ the King Lutheran Church, in New Brighton, where she started a program for Latino parishioners to become lay leaders — people she hopes will eventually become pastors.

“The programs are for adults whose priesthood is their second career, like mine,” she said. “There aren’t a lot of Latinos who are going to college to do their master’s or doctorate to become a pastor.”

Protestant and Catholic leaders in Minnesota are also trying to recruit and train young Latino congregants who want to become priests and clergy. “We now have two training programs in Spanish to help us develop leaders for these local communities,” McDonough said. “We think we’ve made some very significant progress in growing these communities.”

One of the two programs is about 10 years old, and the other is five years old and has graduated its first class of trained personnel last December. Moreover, he added, the church is also reaching out to high school students and encouraging them to think about careers in church service.

Like McDonough and Belzer, Holt is also working with a group called Agora, which has been training African, Asian and Latino immigrants to be faith leaders in their communities in Minnesota.

“A number of our graduates have gone on to be very helpful leaders in these new congregations,” he said of those who completed the program. “In Christianity, we use different languages, and therefore, it’s a question of how to meet the needs of different language groups when we worship together.”