On a cool June afternoon, Emilio Lopez stood behind the chain-link backstop at a baseball diamond in Chanhassen, watching players warm up before a game in an amateur league with the Spanish name Liga Latina de Beisbol, Minnesota.

Lopez, the league secretary who doubles as manager of the Marineros, one of the teams playing that day, motioned toward two young players as they walked by. He remembered them as little boys, when they would come to the ballpark to watch their fathers play.

For him, it was a sign of the league’s staying power – and a reminder of baseball’s enduring popularity among Minnesotans with Latin American roots.

“We think it will keep growing,” Lopez said of the nine-team league. “It’s a competitive league and we are getting more and more players from other backgrounds. The main thing is, we just want to have some fun and promote the sport.”

Liga Latina teams play most of their games at Lake Susan Park in Chanhassen or at North Lions Park in Crystal (and, occasionally, at a ballpark in Brooklyn Center). The games are played on Sundays, beginning in April and running through October, with a midseason break for a league all-star game. 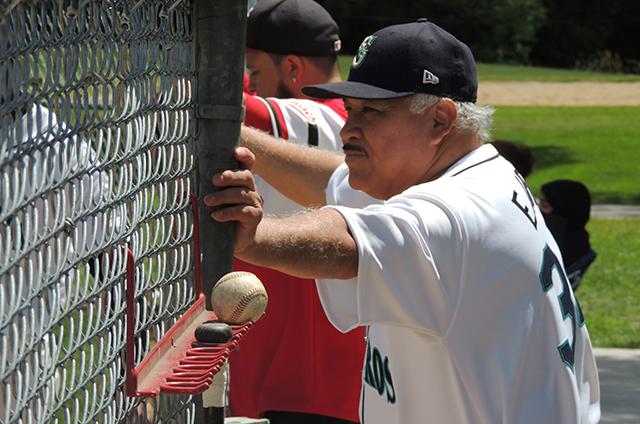 MinnPost photo by Gregg Aamot
Emilio Lopez, the secretary of Liga Latina de Beisbol, Minnesota, and manager of the Marineros, watches his team during a game against the Cokeros.

Lopez traces the league’s beginnings to 1997, when Latin American immigrants began getting together in the Twin Cities for scrimmages. Two years later, Liga Latina de Beisbol (the Spanish Baseball League) was formed. This year, teams paid an entry fee of $450 for balls, umpires and other expenses, with business sponsorships helping to defray costs.

Lopez, who played in the league from 1998 until 2006, said it was formed simply as a way for Latin American immigrants to get to know each other and play baseball. Two decades later, it retains its Latino feel, with rosters made up largely of players with Latin American heritage. Many players speak Spanish (and English) in the dugouts and on the field.

Yet some players are white or from other ethnic backgrounds – a mix that is growing.

“As you can see, it’s not just Hispanics who are playing,” said Leonides Garcia, a college student from St. Louis Park who sat with friends in the bleachers. “I like that, because it’s important for people to get to know each other – even for just a little bit while playing a game.”

The league fits into a strong tradition of amateur baseball in Minnesota, which has about 400 town teams, a handful of over-35 and over-50 leagues and at least one other circuit geared toward players with Latino backgrounds. While it hasn’t happened yet, Lopez said Liga Latina has talked with the Chanhassen Red Birds, a Class B town team in the Minnesota Baseball Association, about playing a game.

Come for the food

About 50 fans turned out for the game between the Marineros and the Cokeros – a smaller-than-usual crowd likely affected by the cool temperatures. People bundled up in blankets, some on metal bleachers behind home plate, others on lawn chairs that were clustered around coolers and folding tables piled with food. 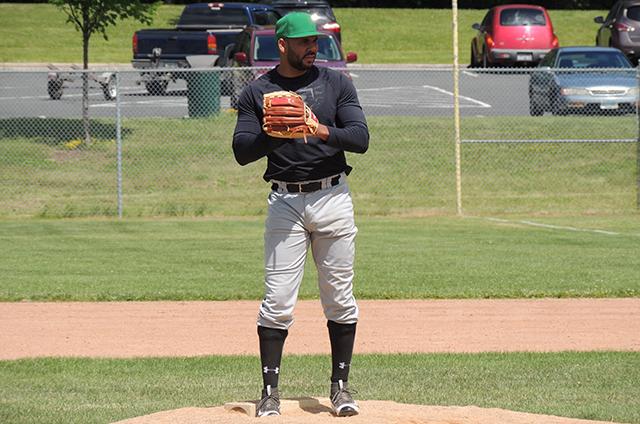 MinnPost photo by Gregg Aamot
Eduardo Hiraldo prepares to throw a pitch for the Cokeros.

With so much familiarity between teams, the game mixed the competitiveness of town-team baseball with the informality of church-league softball.

On the diamond, the play was intense, with Marineros’ left-hander Brandon Schmahl, a former Augsburg College player, battling the Cokeros’ Eduardo Hiraldo, a hard-throwing right-hander from the Dominican Republic.

Meanwhile, a few bench players left the dugout to look for snacks, stopping to talk with fans or to take a couple of shots at a nearby basketball hoop. Some players wore hats and shirts that didn’t quite match the team uniforms, but were close enough.

Garcia, eating a shrimp tamale, said: “OK. I admit it. I really come for the food!”

The Marineros, trailing late, rallied for a 10-9 win. 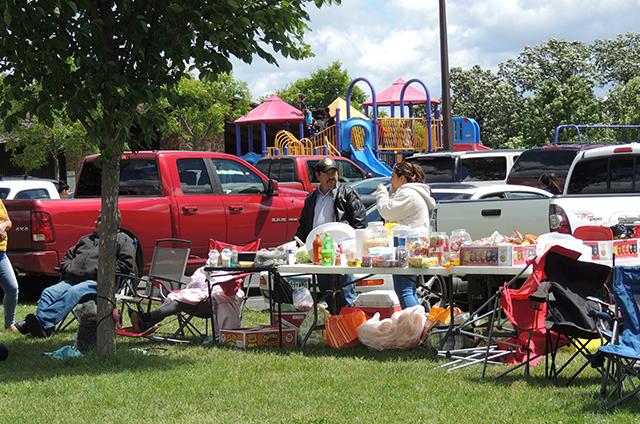 In the Marineros’ dugout, Josh Perez – one of the players Lopez remembered as a youngster – stretched his legs to keep loose in case he got into the game. A high school player at Holy Family Catholic High School in nearby Victoria, Perez remembered watching his father play and wanted to carry on the tradition.

“I’ve been coming to these games for a long time,” he said. “The people are really friendly here, and the league gives a lot of people the chance to keep playing – no matter where you come from.”