When the Minneapolis police officer involved in the shooting of Justine Damond was identified last week as Mohamed Noor, Suud Olat’s iPhone lit up with calls and texts from journalists around the country.

Most of them came from news organizations that were already familiar with the 25-year-old Somali-American, who has made a name for himself as an advocate for refugee communities during the three years he’s lived in Minnesota.

This time, though, the journalists didn’t want him to talk about refugee issues; they wanted information about Noor, a Somali-American who shot Damond after she called 911 to report a suspected sexual assault.

Olat talked to reporters from several local and national media organizations — including the Star Tribune, Minnesota Public Radio, The Associated Press, Voice of America and CBS News — about the one-time brief interaction he had with the officer some months ago in Minneapolis.

Later, when his comments appeared in the news, Olat’s iPhone started to blow up again. This time, though, the calls didn’t come from journalists; they came from people he knew from the Somali-American community, almost all of them saying he should stop speaking to the media about the shooting.

“The community has a natural tendency to avoid the media, thinking that it will tell nothing good about us,” Olat said. “So a lot of community members called me names. They said, ‘You are being used. You are looking for your 15 minutes fame.’”

Throughout most of the 25 years Somali-Americans have lived in Minnesota, they’ve had a complicated relationship with mainstream media — an experience that’s become especially fraught in the last decade, after several Somali-Americans from Twin Cities metro area joined extremist groups in Somalia and the Middle East. For every story about Somali-Americans contributing to the state’s culture and economy, there were others that focused on crime, poverty or extremism, a dynamic that has led many in the community to believe they’re under media attack.

Catherine Squires, a professor at the University of Minnesota who’s taught about American minority communities in the media, says the concern within the Somali community isn’t just about coverage of terrorism or radicalism, though, but also about the overemphasis of negative narratives about Somalis that have long circulated in the news. “If you look at the history of representations of any group that’s not considered white,” she said, “you’d see a very clear pattern of over representation of negative stories, whether it’s crime or problems with education or poverty.”

Last week, when Noor’s name surfaced in connection to the death of Damond, those representations seemed to come full circle. Just two years after the city officials publicly celebrated Noor’s hiring, his Somali background came under renewed focus, with the media descending on the community for details about the officer. Such coverage makes it hard for Somalis to trust the media, even if they want to send a positive message about their community, Squires says, because they’ve become so skeptical about how news organizations will frame their statements when the stories appear. 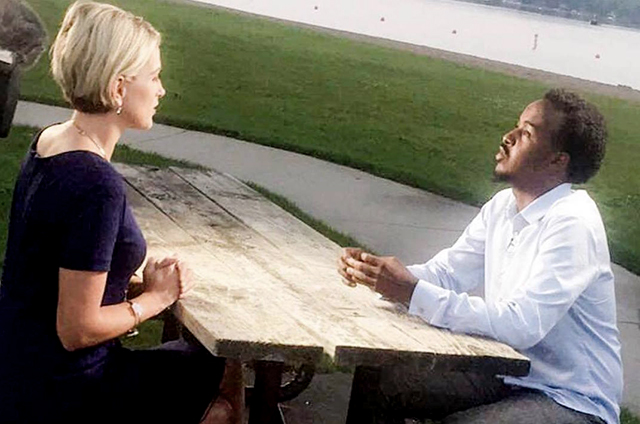 Those fears and frustration were plain to see on Sunday, when Minneapolis City Council Member Abdi Warsame held a press conference to respond to anti-Somali rhetoric that’s surfaced in the wake of the shooting. “Since Justine’s death, there has been an intense focus on officer Noor, blaming his actions on his race, ethnicity and religion,” said Warsame. “Former Congresswoman Michele Bachmann insinuated that Noor might have shot Justine for cultural reasons. I’ve heard others describe this tragedy as a terrorist act by a Muslim against a Christian.”

“That’s very dangerous, because you’re seeing an action of an individual, a member of the Police Department, being given to the whole community,” Warsame continued. “That’s unacceptable.”

Dispelling misconceptions by confronting them

Warsame’s comments echoed the complaints that Olat, the refugee advocate, heard after he shared an Associated Press article — which quoted him describing Noor as “one of the good guys” among the Somali-American police officers with the department — with his nearly 5,000 Facebook friends. He said he received “hundreds” of messages and phone calls from people who told him not to speak with the media.

“Suud Olat please refrain from giving them any interview on our behalf,” one person wrote. “You are not trained to handle media interviews. They will use you to their own end without even realizing it.”

Others criticized Olat for making it seem like he knew Noor better than he did, or because Olat’s comments appeared in stories that included information on citizen complaints filed against the officer, including a pending lawsuit.

“This has nothing to do with Somali Community,” another Facebook commenter wrote to Olat. “The individual in question [is an] employee of [the Minneapolis Police Department], and this matter pertains to him and his employer and the court.”

But Olat has insisted on speaking to reporters. He thinks the best way to dispel misconceptions is to confront them, not to be silent. “This shock between the community and the media needs to be changed,” Olat said. “Yes, the media said bad things about our community, but that shouldn’t make us run away from the media.”

So Olat has maintained an open line of communication with journalists, many of whom asked him about his first impression of Noor when he met him at a soccer game the officer was patrolling in Minneapolis some months back. (He had told them that the officer “was someone who was proud of his job.”)

Olat said how he reacted to his critics was consistent: that he never claimed he knows Officer Noor personally and that he was only speaking of his brief experience with him, which was positive.

“I told them that the officer was cool and professional,” he responded to those who called him out. “And if any media twists my words, I will hold them accountable. No one can say I said what I never said.”