Most developed countries in the world have a list of requirements and procedures to grant lawful immigrant residents citizenship. In the U.S., those requirements include having a clean criminal record, living in the country for a certain period of time, knowing the English language and having a basic understanding of American history and government.

But each year, even as thousands of immigrants and refugees successfully complete the naturalization process, many eligible residents — including many who have lived in the country for decades — don’t seek to become U.S. citizens.

There are many different reasons for this, of course. Some can’t pass the mandatory exam; some can’t afford to pay the $640 application fee and $85 background check. And some just don’t see the need, or have the desire, to officially become American.

In recent months, however, immigration assistance centers throughout Minnesota have seen a conspicuous spike in the enrollment in citizenship classes, which are filled by immigrants and refugees who recently became eligible for the naturalization process as well as those who have lived in the United States for decades.

The timing of the increase isn’t much of a mystery. The enrollment jump, which has been felt most acutely at citizenship prep centers in the Twin Cities metro area, started in January, when President Donald Trump took office.

“Six months ago, many people started calling and asking about our citizenship classes,” said Txongpao Lee, executive director of the Hmong Cultural Center in St. Paul. “They wanted to become U.S. citizens in order for them to travel abroad when they want, and feel safe.”

Home to more than 400,000 foreign-born residents, Minnesota has in recent decades seen an increase in the number of immigrants and refugees escaping violence and persecution in East Africa, Latin America and Southeast Asia. As a result, the state is now home to dozens of immigration centers: places that offer citizenship prep programs for eligible foreign-born Minnesotans.

Though such classes are free, the programs have traditionally not been as popular as ESL and GED programs also offered by such centers. That changed with Trump, whose anti-immigration rhetoric became a focus of the presidential election last year, and now more and more immigrants and refugees have turned to such programs.

The Hmong Cultural Center, which is one of the few organizations in the state that provide citizenship classes as one of their major offerings, started seeing the interest in their classes start last summer. “I saw it across the classes,” Mark Pfeifer, the center’s director of programs and development, said of citizenship prep program. “This year, we have the highest number of students in recent years.”

To address the increase in demand, the center last year expanded two prep classes at the First Baptist Church and Guadalupe Alternative Programs, so that the classes would be more accessible to those from the Karen, Somali and Mexican communities.

Like the Hmong Cultural Center, the Minneapolis-based Language Central has also seen an increase in the number of U.S. citizenship applicants seeking help.

“Before January, we pretty much taught one or two students at a time,” said Lynn Olson, director of the 4-year-old Language Central. But since January, the center has seen 15 students come to its citizenship classes. Of those, four of them have so far passed the test.

The main reason many people are filling up U.S. citizenship classes in the Twin Cities, say those who work with immigrants, is because many lawful permanent residents feel they might not be able to return to the country if they travel overseas.

In a classroom at the Hmong Cultural Center, Sia Her sat with three other people who came to memorize a list of 100 questions about American history and government, from which an immigration officer chooses 10 questions during the written and oral naturalization exam.

“This is her first day,” said Lee of Her, who doesn’t speak English. “She said after Trump became president, it’s hard for individuals to travel without U.S. citizenship. There are a lot of uncertainties among immigrant and refugee communities.”

Those uncertainties stem from Trump’s harsher immigration policies and enforcement, which calls for banning people from certain Muslim-majority countries, reducing the number of refugees entering the U.S. and deporting unauthorized immigrants. 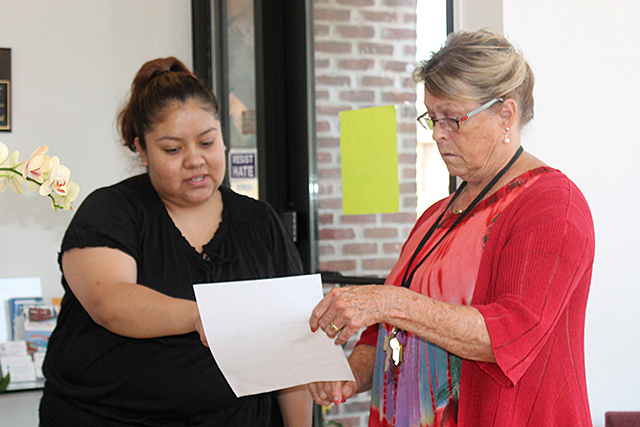 Not every student in the citizenship classes, however, wants to become naturalized for fear of anti-immigration policies. Pang Vang, who arrived in the U.S. in 1979, has started her the process for a different reason.

“It doesn’t have anything to do with the immigration issues that are happening,” said Vang, who on a recent afternoon sat at the back of citizenship prep class at the Hmong Cultural Center. “I just want to be an American citizen.”

Growing up, Vang added, she thought the only reason people became citizens was because they wanted to travel overseas. But since she didn’t have money to do that, Vang figured, there was no need for her to go through the months-long process of naturalization.

Today, Vang said, she realizes that one of the most important reasons she wants to become a citizen is the simple fact that she’s here to stay and that she needs to earn the rights she was never able to exercise, including voting, serving on a jury and running for a public office.

“I’ve been in the U.S. most of my life,” Vang added. “I would never want to live anywhere else. I love America, and it’s time for me to get my citizenship.”

Worried about Trump and travel, immigrants and refugees flock to citizenship classes