On a recent Saturday, one week after a bomb was detonated inside the Dar Al-Farooq Islamic Center in Bloomington, Mohamed Omar stood outside the mosque. Traces of the blast and messages of support still remained on display.

As he thought back to that fateful day, Omar, executive director of the center, could only thank two things for his surivival: God and the brick wall that stood between the room where the explosion occurred and the couch where he napped as he waited for the morning prayer.

“If that wall wasn’t made of bricks,” said Omar, pointing to the now windowless conference room that once hosted important guests, “it would have been over for me.”

The bomb caught the country’s attention, but wasn’t the first time the mosque had been targeted. Its congregation has been subjected to death threats and intimidation before, including several incidents where people stood outside the mosque, shouting racial and anti-Muslim slurs at worshipers entering or leaving the center, said Omar.

Such events have become increasingly common occurrences in Minnesota. And in the wake of the Bloomington bombing incident, which Gov. Mark Dayton called “an act of terrorism,” mosque leaders in Minnesota are increasingly talking about ways to improve their practice of documenting and reporting hate incidents to the police — a practice that hasn’t been common up to now.

“We’re a new community, very fragile and vulnerable,” Omar said. “If something happens, calling the police would be the last thing to come to mind. We’d think twice because we don’t know what’s going to come out of that.”

Though anti-Muslim violence has long existed in the United States, especially after 9/11, it’s become more widespread over the last 18 months, especially as anti-Muslim and anti-immigration rhetoric became a regular part of the 2016 presidential campaign.

Since the election, Omar said, people have come to the Islamic center’s parking lot area with their cars, yelled anti-Islam and racial insults, and drove away. One of those incidents, however, was more than just screaming racial slurs. “A man came and threatened to bomb the place,” Omar said. “We asked him why. He said ‘You’re bringing the country Sharia law.’”

Around the same time, the Islamic Da’wa Center in St. Paul also received similar threats — some of which the mosque reported to the law enforcement. “There have been many hate incidents targeting our mosque,” said Hassan Mohamud, who heads the center. “One day, there was a poster posted on the door. It had insulting messages about the Prophet Mohammad.” 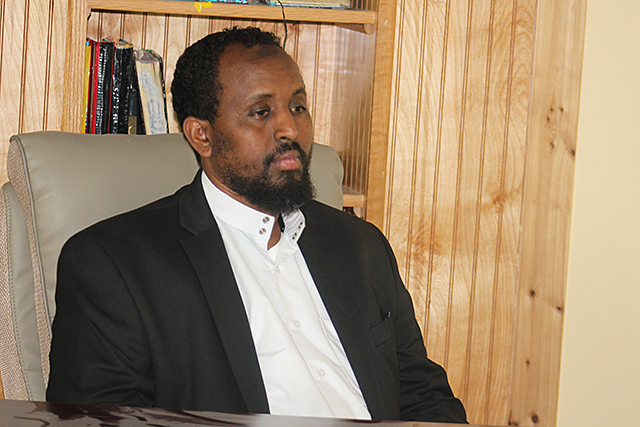 MinnPost photo by Ibrahim Hirsi
Mohamed Omar: “We want everybody in the community to take these threats seriously.”

Mohamud Farah, the executive director of Masjid Al-Rawdah in south Minneapolis, said the mosque hasn’t gotten any form of threats or anti-Muslim messages, though he’s been personally subject to racial harassment on the streets. One of those incidents, Farah said, happened just a week ago on Lake Street. As he waited at a red light, a motorist next to him unleashed racial slurs and spat towards him. “It happened in broad daylight,” he said. “It was really scary.”

Even as anti-Muslim incidents have increased across the state, however, mosque leaders and victims are often reluctant to report to police.

There are many reasons for that, and one of them has to do with culture, Omar said. Some Muslim immigrants, for example, came from places where threats and intimidation have always been part of their lives. “For me, it never made sense to report a threat,” he added. “I always thought that if someone threatens you, you just tell them get out of here” and move on.

Like Omar, Farah said that it’s rare that members of the Muslim community — especially Somalis — report verbal assaults, except when there is physical abuse involved. “I didn’t report what happened to me at the traffic light,” he added. “It just didn’t come to me.”

Omar and other mosque leaders want to change that. That’s why Dar Al-Farooq Islamic Center and Islamic Da’wa Center are organizing classes that would provide imams and community members training on how to respond to harassment and threats.

“We want everybody in the community to take these threats seriously,” Omar said. “They don’t have to wait until something happens to them … because the main reason we report such threats is to prevent a potential danger.”

Through the training, leaders also hope to change a commonly held perception in the community: that 911 operators and police officers will mark their contact information if they call for help more than three times. “They believe that their homes or centers would be designated as a crime scene,” Omar said. “So they try their best to avoid making it to the list.”

The training is also meant to educate undocumented immigrants about ways they can report threats — and to dispel the common myth and misconceptions that they’ll face deportation if they report crimes or testify in court. “These kinds of conversations are more important now than ever,” Mohamud said. “We are living in difficult time, and we need to equip the community with the right tools.”