After deadly mudslides swept through Sierra Leone earlier this month, numerous events were held throughout Twin Cities metro area — meetings that both raised money for relief efforts in the west African country and detailed how the disaster had impacted many of the estimated 8,000 members of the Sierra Leone community in Minnesota.

And yet, Issa Mansaray, a leader and journalist who’s well-known among the Sierra Leone community in Minnesota, skipped many of those meetings. Not because he wasn’t sympathetic, but because he thinks the community needs to start going beyond fundraisers. That also why, next month, he’s organizing a community gathering to push Sierra Leonean leaders to more effectively address some of the country’s recurring problems.

“We’re trying to bring the issue into the international spotlight,” said Mansaray, who runs the Brooklyn Center-based Africa Institute for International Reporting, which advocates for freedom of the press and provides media training for journalists. “The issues in Sierra Leone have been going on for many years, but certain things have never been addressed; this is why the solutions are not there.”

‘Having a genuine conversation’

In the morning of Aug. 14, a hilltop on the outskirts of Freetown, Sierra Leone’s capital, collapsed after a heavy downpour that overflowed the city, killing more than 600 people and leaving 3,000 more homeless.

Over the past three decades, Mansaray said, Freetown has become increasingly congested, as more and more people left villages and towns across the country for the city.  That’s meant more and more informal resettlements in and around mountain areas that have long been prone to mudslides.

Making matters worse, says Mansaray, was the country’s lack of emergency personnel or sophisticated weather monitoring system. “People were not able to save themselves,” he said. “They were washed away.”

And though it’s important to support the needy, he said, it’s equally important that leaders — home and abroad — come up with a plan to more effectively prevent such tragedies and mitigate their consequences in the future. All of which led Mansaray to create a forum to bring together African intellectuals and academics in Minnesota for talks about the recurring disasters in the region, and the roles Sierra Leonean leaders in Minnesota can play in address those issues. 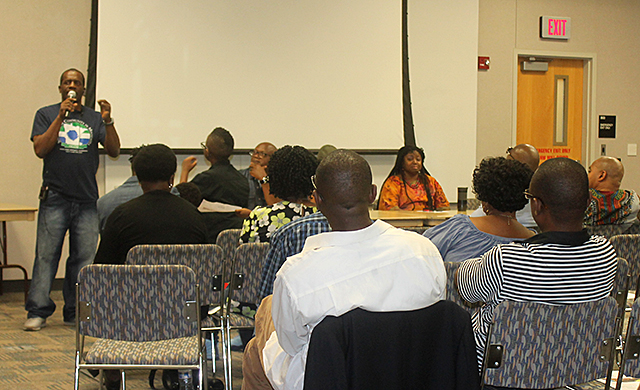 MinnPost photo by Ibrahim Hirsi
A group of West African leaders meeting at Brooklyn Center’s Brookdale Library for a fundraiser event aimed at supporting victims of mudslides in Sierra Leone.

“The focus is to highlight the Sierra Leone issues and have a genuine conversation with the Sierra Leonean leaders here,” he said. “We have to re-think before we think about asking people for donations. There should be strategic plans in place.”

He also wants to make the philanthropic response more effective when tragedies do occur. For example, even though many people want to donate to the needy in the wake of the mudslides, said Mansaray, many of the GoFundMe accounts seeking funding haven’t received close to what they had asked because they don’t follow the procedures for requesting donations — skills he also hopes to highlight at the September event.

“What is the targeted objective?” he asked about the fundraiser effort. “Is it for medical purpose? Is it to transport people? They don’t have proper planning. So, people who are contributing have to think twice about why they should donate.”

After deadly mudslides in Sierra Leone, a Minnesota journalist pushes community to go beyond donations