The YouTube video clip shows an elderly man from St. Paul sitting cross-legged on the floor. He mixes lime paste, chopped tobacco, betel nuts and other ingredients before wrapping the mixture in a betel leaf, forming a product known as betel quid, an addictive stimulant widely used in Southeast Asia that’s common among Minnesota’s Karen community.

The video is not a tutorial, though. The man, Oo Seh Bya, uses it to show members of his community how tobacco left him with stained teeth; how he was hospitalized “multiple times” for illnesses related to betel quid and smoking; and how he would have died if it wasn’t for his doctor warning him against the use.

Now Bya wants to help warn a younger generation of Karen immigrants in Minnesota to rethink their relationship with tobacco use. “I was a heavy smoker and I do not want to see anyone in my community having to go through the same hardship,” he says in the video.

Bya’s video is part of the Karen Tobacco-Free Program, an initiative created by WellShare International and Karen Organization of Minnesota (KOM), to raise awareness about the health consequences of tobacco use among Twin Cities’ Karen people, a community that has unusually high rates of tobacco use, health experts say.

“Our main goal is to educate the community on the harms of tobacco and eliminate the use in indoor and outdoor settings,” said Jennifer Plum, a program manager at WellShare International, a nonprofit that provides health services in Minnesota and abroad. “We have tobacco education classes taught by health educators from the community.”

Before their journey to Minnesota in the early 2000s, most Karen people heavily used tobacco in their native Burma. The Southeast Asian nation, like many underdeveloped countries, doesn’t have regulations restricting children from using tobacco products, and children as young as 7 years often smoke or chew betel quid alongside their parents, said WellShare International Executive Director Diana DuBois. “So people got addicted quite young.”

In Minnesota, noted DuBois and Karen-American health educators Ner Mu and Tha Dah Loo, most of the estimated 13,000 Karen people are still heavy users of tobacco, especially betel quid. And many are not familiar with the laws and policies surrounding the legal age to purchase or use tobacco.

The Karen Tobacco-Free Program was created to explain both the laws and the public-health consequences of tobacco use. To do so, the program works closely with Karen religious leaders and elders, like Bya, who then explain the health effects of tobacco use in-person and through videos. Health educators from WellShare and KOM distribute those videos at community centers and social media.

Another way the program provides education about risks of tobacco is through weeks-long classroom training. “We cover peer pressure,” said Loo, who is one of the training facilitators. “We’re trying to work with participants to find health alternatives to using tobacco.”

May Cher is one of the participants recruited to the training program, where — for the first time in her life — she’s learned about the health consequences of betel quid, which health experts say can lead to oral cancer and leaves users with stained teeth. 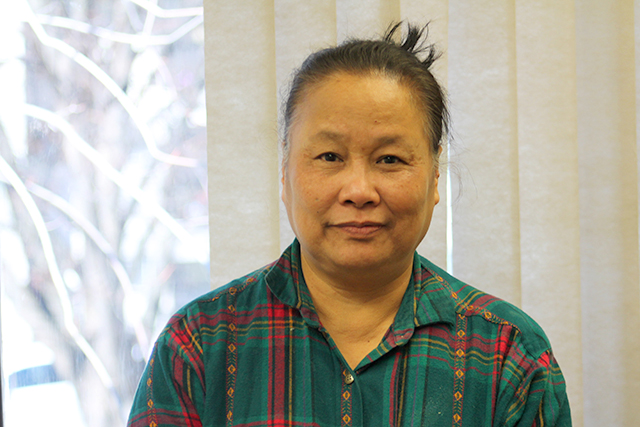 MinnPost photo by Ibrahim Hirsi
May Cher is a participant of the program.

Today, not only is the 60-year-old working toward quitting the use of tobacco as a result of what she’s learned from her class, she serves as an advisory committee of the program, assisting health professionals come up with the best way to reach out to older Karen people.

“I started chewing tobacco when I was 20 years old,” she said. “When I came to the U.S., I realized I couldn’t spit wherever I wanted. But I didn’t know how harmful tobacco use was. This program helped me understand that.”