Nearly a decade ago, when Henok Alemayehu Degfu spent his first two paychecks on a laptop, some of his relatives thought he was nuts.

Degfu had been in the U.S. for only a couple of months at that point, and those close to him expected him to save the money he earned from his part-time job.

Degfu, however, had a dream — one he had been determined to pursue since 2004, when the government in Ethiopia shut down the newspaper he ran there and accused him of defamation, charges that could have put him behind bars for decades.

His purchase of that Toshiba laptop was the first step toward establishing a news outlet in Minnesota — home to thousands of Ethiopian-Americans who arrived in the 2000s as political refugees — for and about his native country.

After securing a computer, all that Degfu needed to do was to report, write and put together an entire newspaper. And in December of 2008, that’s exactly what he did, publishing the first issue of ZeHabesha, a 24-page monthly newspaper featuring articles that are important to the Ethiopian-American community.

“I started publishing 4,000 copies each month,” said Degfu, 34, who serves as the newspaper’s editor-in-chief. “It was very hard to do it on my own, but I knew people were hungry for news that is told in their language; and as a journalist, I felt I have a responsibility to provide that.”

A brief history of Ethiopians in Minnesota

Ethiopians started coming to the United States in the 1960s, mostly as students pursuing higher education or professionals who were sent here for career development. After their arrivals, many of them obtained permanent residency and extended their stay in the U.S.

That small group was later joined by larger groups, many escaping civil war and ethnic tensions — complicated by drought and famine — during the 1970s and 1980s.   When those tensions escalated once again after 2000, an even larger wave of Ethiopian immigrants came to the U.S., according to a report by the Migration Policy Institute.

Today, there are more than 250,000 Ethiopians in the U.S., making them the second largest African immigrant group in the country, after Nigeria.

The largest community is in the Washington, D.C., metro area, followed by the Twin Cities. Official data put the number of Ethiopian residents in Minnesota at 13,000, though Solomon Gashaw, an associate professor at the University of Minnesota, says it’s likely more than 20,000. 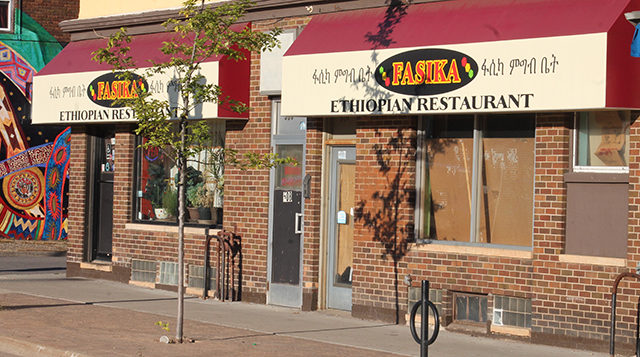 MinnPost photo by Ibrahim Hirsi
Fasika Restaurant, located along Snelling Avenue in St. Paul, is one of hundreds of Ethiopian-owned businesses in Minnesota.

One of the most diverse countries in East Africa, Ethiopia includes people who speak 80 different languages and practice several different religions — with the main ones being Orthodox Christianity, Islam and Protestantism.

At the time he left Ethiopia in 2005, Degfu faced 12 different court cases after the government sued him for defamation. Such accusations, he said, have long been a tactic for government officials to intimidate or silence journalists in Ethiopia.

Degfu’s friend and mentor, Eskinder Nega, was sentenced in 2012 to 18 years in prison after writing a column that criticized the government for suppressing freedom of speech and detaining journalists under the country’s anti-terrorism laws. “They shut down his newspaper,” Degfu said. “Then he started blogging about freedom of speech stuff. But the government doesn’t like that.”

Gashaw has been closely following the government’s efforts to crack down on journalists. “Ethiopia is hell for journalists,” he said. “Any publication that deems politically dangerous for the regime will end up in jail.”

Today, from Minnesota, ZeHabesha Newspaper [Sept. 2017 PDF] covers news stories and opinion pieces in Amharic, the official language of Ethiopia. In its most recent editions, the newspaper has focused on President Trump’s immigration order and its effects on the community, as well as the recent hurricanes in Texas, Florida and Puerto Rico.

Currently the only Amharic-language news source in Minnesota, ZeHabesha has doubled its circulation in recent years — from 4,000 copies a month to 9,000 — with readers in the Twin Cities metro area, Rochester, Worthington and South Dakota and Chicago.

Aside from the print newspaper, ZeHabesha has a frequently updated online version that’s tailored to a worldwide audience. It focuses on the political unrest in Ethiopia and gives marginalized communities a platform to voice their concerns and share their stories. The paper has also a strong presence on social media, with more than a million followers on Facebook. 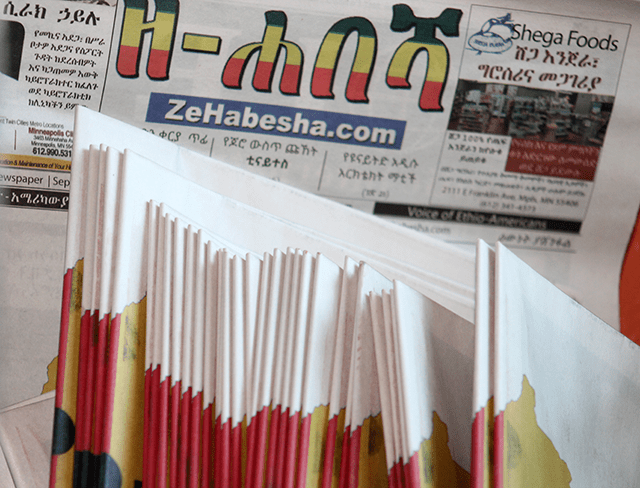 MinnPost photo by Ibrahim Hirsi
ZeHabesha has a circulation of more than 9,000 and can be found at Ethiopian-owned businesses across Minnesota for free.

“ZeHabesha is a very popular newspaper in Minnesota,” said Gashaw, adding that it’s given readers an alternative to the government-controlled outlets in Ethiopia.

Though the paper had a rocky start, Degfu — who still has a day job as director of housekeeping at AC Hotel in downtown Minneapolis — says that the paper breaks even financially, though Degfu still does most of the news production duties without pay on nights and on weekends when he isn’t at the hotel.

When the question about why he spends his time on a newspaper he doesn’t profit much pops up over beers with his friends, Degfu has a ready response: “Some people go hunting because that makes them happy,” he tells them. “For me, the newspaper gives me that. I feel so good at the end of each month when I see my work in print.”