Minneapolis resident Ahmed Hirsi was only a few miles away from the powerful blast that killed hundreds of people in Mogadishu last Saturday.

When he arrived on the scene, where a truck filled with explosives was detonated, Hirsi saw pavement covered in blood; bodies decapitated and shattered, burned beyond recognition.

As the deadliest single attack in Somalia’s history, the explosions killed more than 300 people, including a Bloomington man — a death toll that’s expected to rise as crews continue to dig into the rubble for signs of life.

Just hours before that fateful afternoon, Hirsi had posted smiling photos of himself on Facebook, urging young Somalis in the U.S., Europe and Canada to return to the East African country and get involved in efforts to rebuild it.

On Monday, however, Hirsi returned to Minneapolis, still reeling from the shock of the bloody attacks that rocked Mogadishu, where he spent 10 days with a group invited by the Somali government to review parts of the country’s new constitution.

Now, Hirsi — who is married to Minnesota state Rep. Ilhan Omar — is part of a growing effort led by various Somali-American individuals and organizations in the Twin Cities aimed at assisting victims and families they left behind in Somalia. “I plan to meet with young people in the community to talk about what we could do for the country,” Hirsi said. “Fire trucks, ambulances, supplies for hospitals and other things.”

The return to Mogadishu

During the three decades that Somalia has been at war, Mogadishu has served as a battleground for competing forces — warlords, clan-based governments and the al-Qaeda-affiliate group al-Shabab — all of whom have been fighting over the capital.

Since 2011, however, when al-Shabab was pushed out of Mogadishu, the city has gain a sense of stability — even as remnants of al-Shabab fighters have managed to carry out calculated assassinations and sporadic suicide attacks.

That stability has also led many Somali-Americans from Minnesota and other parts of the country to return to the city, with many of them taking jobs with the government, international organizations or starting and running businesses.

“Most of the big businesses there were created by the Somali diaspora,” Hirsi said of those from the U.S., Canada and Europe. “They have the best restaurants. They have the best hotels. Can you imagine: I was having hamburgers and fries in Mogadishu.”

Indeed, among those who have returned to the East African country from abroad include its current president, Mohamed Abdullahi Mohamed, who — until earlier this year, when he was elected for the post — served as an equal opportunity compliance officer at the New York Department of Transportation.

It’s not surprising that many people in the Somali diaspora community have gone back, said Jessica Stanton, an expert on global security and conflict, who teaches at the University of Minnesota’s Humphrey School of Public Affairs. “Because some of those people migrated quite some time ago, they had time to establish themselves either in the U.S. or other countries,” she said. “Therefore, they have the resources to be able to go back and try to help.”

In Mogadishu, President Mohamud has the backing of the U.S. and the African Union, but his administration — like other previous administrations — has nevertheless struggled to maintain security.

So far, no group has taken responsibility for the weekend attack, though al-Shabab has carried out similar attacks in the past, and government officials in Somalia and many people in Minnesota haven’t been shy about blaming the group.

“It’s al-Shabab, obviously,” Hirsi said. “Who else would do that?”

While only one Minnesota resident — Ahmed Eyow, 50, of Bloomington — has been confirmed to be among the dead in the bombing, the incident has affected Minneapolis’ Somali-American community in various ways.

“This attack was so violent that all of us have been searching our loved ones,” said Jaylani Hussein, executive director of the Minnesota chapter of the Council on American-Islamic Relations (CAIR), during a press conference he organized earlier this week. “I also have family members, some of them living in Mogadishu, and we were actually worried about them.”

Hussein said that many in Minnesota who have lost loved ones or friends are “feeling helpless” as more and more gruesome images of the scene continue to blanket social media feeds and television screens.

Hirsi lost some relatives and friends in the attack — and was still receiving messages about missing persons feared dead.

Hassan Mohamed, imam of the St. Paul-based Islamic Da’wa Center, also has immediate family in Mogadishu. And though none of them died or were injured in the attack, they’ve also told him that they no longer feel safe there. “I just got a call from one of my brothers and he told me that they’re trying to find out where to move,” Mohamud said. “They’re not feeling any safe right now in Mogadishu.”

Since the news of the attacks reached the Twin Cities on Sunday, local Somali-Americans have been meeting to raise funds for the victims and their families — here and abroad.

One group of youth leaders in Minneapolis, for example, created a GoFundMe account on Monday to provide medical supplies for the injured, burial services for deceased and financial assistance for entrepreneurs who lost their businesses in the attacks.

Humanitarian African Relief Organization (HARO), a Minneapolis-headquartered nonprofit with offices in Somalia and Kenya, is also raising funds to provide affected persons food, shelter and medicine. “HARO is already preparing and is already on the ground to help people who are in need,” said HARO Executive Director Yusuf Abdulle. “We have mobilized our communities and people who are helping to work with the victims.” 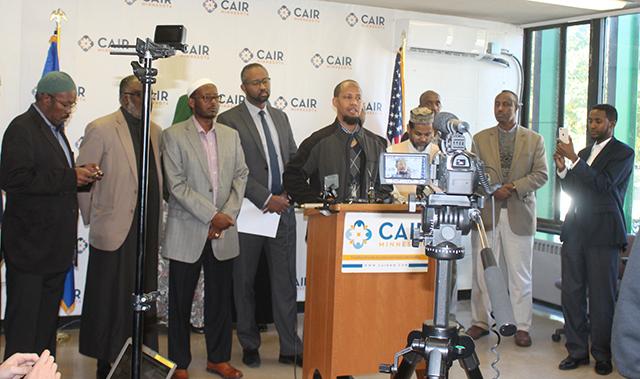 MinnPost photo by Ibrahim Hirsi
Speakers addressed one of the several events CAIR-MN has organized since last weekend to update local communities about the attacks in Mogadishu.

Mosques and other Islamic groups in the Twin Cities metro area are also mobilizing efforts to raise money. Leaders at Minneapolis’ Abubakar As-Saddique Islamic Center, for example, are preparing for a big fundraiser event on Friday. “We addressed the congregation and people want to help with whatever they can,” said Abdulaziz Sugule, a board member at the mosque. “Mogadishu needs our help, and we pray for the people who died and those who injured.”

The Muslim American Society of Minnesota (MAS) also plans to raise money for the victims and their families during its annual convention on Oct. 28 in Minneapolis. The organization’s executive director, Imam Asad Zaman, said his team is still brainstorming ideas about ways MAS can allocate funding to the right people.

“We urge the entire Minnesota community to stand with the people of Somalia and to give them all the aid and assistance [they] can,” Zaman said. “We are also going to offer whatever help is available at our disposal.”

Aside from raising funds to provide victims food, shelter and medicine, Hirsi said he plans to collaborate with people to find ways to get ambulances and emergency-medical-services equipment for undersupplied hospitals in Mogadishu.

After the dust settles in Mogadishu, Hirsi plans to return to the capital — to show that nothing can ever shake his conviction to help rebuild Somalia.

“I want to go there with a group of Somali-Americans,” he said, “to say to the people of Mogadishu, ‘Those explosions did not change us and we’re here now, stronger than ever before.’ ”