Growing up deaf in a hearing family, Fardowsa Ali never had access to a sign language, lip-reading or any other forms of communication.

In Somalia and Kenya, where she spent the first 27 years of her life, deafness can be a major setback to having an active life. For Ali, it meant not going to school and living in isolation — even in a house full of people.

But in 2006, Ali immigrated to the United States, where she had discovered for the first time things she never knew existed: that she had a name and date of birth; that she has options to communicate with others; that she can do almost anything she wants — like going to work and earning her own income. “I can’t believe I didn’t know my name for many, many years,” she said through an American Sign Language (ASL) interpreter. “I had nobody to teach me anything.”

During the 11 years that she’s lived in Minnesota, Ali has achieved many milestones she once never thought possible. She became fluent in ASL, secured a part-time job at a UPS store and made friends in both the deaf and hearing communities.

She and her friends have been involved in efforts to engage other immigrant and Muslim members of Minnesota’s deaf community, many of whom often deal with the sort of isolation Ali once endured in her East-African country.

“When deaf people first come here,” said MDCM president Abdullahi Moallim, “they don’t have anybody that they can relate to. They don’t know the sign language. So they would just lose hope.”

Addressing misconceptions about deafness — and Islam

Moallim, like Ali, is no stranger to the plight of those he’s trying to help. When he arrived in Minnesota four years ago as a refugee, he didn’t have anyone to communicate with for more than four months.

Then one day, he attended an Eid prayer at a south Minneapolis mosque, Masjid al-Rawdah, and ended up sitting to next Zakaria Einab, a resourceful and outspoken deaf Somali-American. “Are you deaf?” Einab asked Moallim in sign language, after stealing glances at each for some time.

“I replied, ‘Yes!’” Moallim said. “I was really happy to meet another deaf.”

Einab then helped Moallim learn ASL while also introduced him to other deaf and hard-of-hearing people in the Twin Cities, including Ali and Aisha Dualy, who eventually became his wife earlier this fall.

Later, Moallim also met with Idil Mohamed, an educator at Metro Deaf School in St. Paul and the only ASL interpreter in the state’s Somali community. Today, the two co-teach sign language to deaf and hard-of-hearing children and teenagers at the Abubakar As-Saddique Islamic Center in Minneapolis. 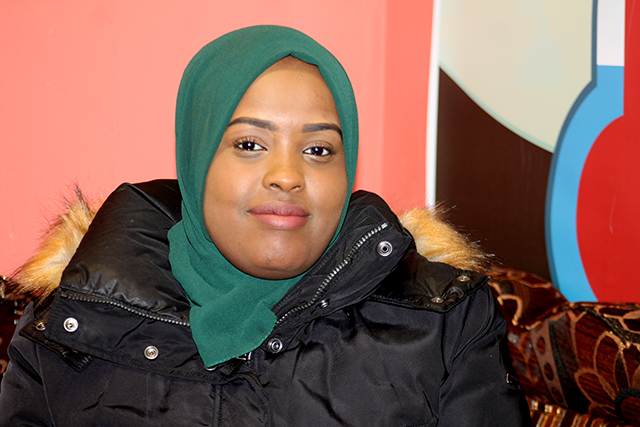 In addition to teaching ASL and connecting deaf people to services, Moallim and his team host events and visit community centers to build bridges with the non-Muslim deaf community — and to address misconceptions about Islam and Muslims.

Through MDMC, Moallim and other members of the deaf community have also been visiting mosques to talk to imams and congregations about the challenges deaf people face in the Muslim community when they attend Friday lectures and religious classes.

“Almost anywhere we go, we don’t have any problems communicating with people,” Einab said. “But when we come to mosques, there’s nothing for us. I want to tell the hearing community, ‘Hey, this community needs your help.’”

Like many underdeveloped countries, Somalia can be a difficult place for people with disabilities. For those who are deaf, for example, there are few institutions to help, even with basic services.

To make matters worse, Somalis have a habit of nicknaming people based on their physical appearance or state of being. Those without a limb, for example, are often called Lugey (one-legged) or Gacmey (one-armed); the one-eyed is Iley; the blind, Indhool; and the deaf, Dhagool.

People who were born deaf face the unique challenge of not being aware of their names, or nicknames, which is why Ali didn’t learn her name until age 27.

Aside from names and nicknames, some Somali parents who have children with disabilities are reluctant to enroll them in schools or be seen with them in public. “They feel embarrassed that they have disabled children,” said Ali.

Einab has also encountered those attitudes, especially after reaching out to some local imams about helping deaf people to receive religious lessons and lectures in sign language. “Oh, you’re deaf,” he said mosque leaders told him. “You can’t do that.”

“No, the only sense I don’t have is my hearing,” Einab said. “I can do a lot of things; I’m very smart. I’m doing a bachelor’s degree in social work at the University of Minnesota. There are a lot of deaf people that are smart.”

Einab, Ali and others at MDMC are among the most active members of the state’s foreign-born deaf community. While advocacy is the group’s central mission, Einab said, it’s equally important that it inspire deaf children as well.

Indeed, they’re doing that not by telling young kids what to do, but by showing them how they’re contributing to society and what they’ve achieved in college and at work.

Einab, for example, is junior at the U of M and helps deaf individuals to “become better people” and internalize one important aspect of their lives: “You’re deaf, yes; but don’t let that be your stopping point.”

When he’s not in school, Einab said he volunteers at ThinkSelf, a nonprofit that provides GED training and community education to deaf and hard-of-hearing adults. He also teaches sign language to new immigrant Somali deaf people.

Dualy, who emigrated to the U.S. two decades ago and graduated from Southwest High School, plans to study physical therapy at Normandale Community College in Bloomington in the spring.

Ali is the past president of the MDMC, and currently splits her time between working for UPS and assisting foreign-born deaf adults to find jobs, schools, housing and other resources they needed.

Both say they hope their career and educational achievements would inspire young deaf immigrants and would show then that the verdict of deafness is not a death sentence — at least in this country.

“There are a lot of knowledgeable deaf people in our community,” Einab said. “I want to show a proof to the younger generation that they’re capable of doing anything they put their mind to.”

Minnesota’s Somali deaf community battles stigma, by advocating for itself