As immigration remains a hot-button issue in American politics, more Somali media outlets have spread across Minnesota in recent years — often to amplify the community’s positive contributions — even as the businesses face steep financial challenges.

In 2015, the Minneapolis-based KALY Somali-American Radio, a low-power FM station, joined the airwaves to provide Somali-Americans with around-the-clock news and music programming. And in 2014, the online news operation Tusmo Times added a 5,000-circulation newspaper that is now distributed in Somali-owned businesses and community centers throughout the Twin Cities metro area.

While the owners of these news sources may have different niches, what motivated them to enter the media business, they say, is the desire to focus attention on community stories that other news outlets often only give a passing glance. “One of the reasons I started this work is to promote the success stories of the African community,” said Haji Yusuf, owner and host of GTN News. “I wanted to show their success stories and the success of their businesses; the success of individuals who are doctors and nurses.”

Covering those kinds of stories was also the reason Warsame Guled founded the monthly Somali American last year. But that wasn’t the only one. Guled, who also owns a home care business in Minneapolis, thought of the idea to establish a newspaper when he and other entrepreneurs realized they couldn’t find a platform to promote their businesses. “We were looking for ways to reach the Somali community,” Guled said. “I found out that there were no direct channels to reach Somali people.”

Today, the paper distributes 10,000 free copies of the paper, which — like other ethnic newspapers — are available in coffee shops, restaurants, community centers, libraries and other public spaces that Somali-Americans frequent.

The paper often focuses on Somali-related events in Minneapolis. Stories are written by freelance reporters or volunteers, or reprinted from other news organizations.

Its competitor, Tusmo Times, tends to cover local, national and international Somali-related stories. Originally called Ciyaartoy and established in 2012 to give the Somali community online coverage of sports, the organization eventually changed its name and expanded its coverage to include hard news and created a monthly newspaper printed in both Somali and English.

“My main goal is to document and archive the stories of the Somali-American community in Minnesota,” said Abdirahman Mukhtar, founder of Tusmo Times. “That way, if my kids want to read about their own Minnesota history tomorrow, they can find it in both Somali and English languages.”

Yet whatever the intended goal, most local Somali-owned media outlets — including those that have been around for more than 20 years — struggle to generate revenue. Many rely on volunteers and the people who run them often have other jobs to pay the bills.

“I sometimes put in my own money to print the newspaper,” said Mukhtar. “That’s why I haven’t printed in the last two years.” 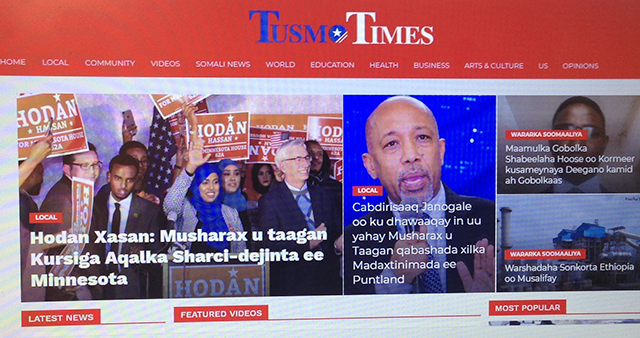 Abdirahman Mukhtar, founder of Tusmo Times: “My main goal is to document and archive the stories of the Somali-American community in Minnesota.”

As with the mainstream media, Somali media entrepreneurs are trying new models to try to build sustainable businesses. GTN, for example, has partnered with Xidig African TV, a system that lets users watch African television stations via the internet, to air its programs — and to make money.

GTN’s Yusuf noted that the station now reaches more than 800 homes in St. Cloud and its surrounding cities. Customers buy a custom streaming media device for $119 or pay a monthly fee of $20. The equipment gives users access to GTN’s on-air programs and more than 300 other channels through Xidig African TV.

Giving ‘a full picture of who we are’

GTN provides its programs in both Somali and English, and focuses on local, state and national issues that affect the Somali-American community. “I want to give this community an alternative voice so that they can see how we’re making contributions in this part of Minnesota,” Yusuf said.

Mahamed Cali, the head of KALY radio, echoed that sentiment in describing why he established the radio station, which also covers local, state, national and international issues that affect the community. Since its launch in 2015, the station has become a popular source of news for Somalis in the Twin Cities, who listen to the radio through 101.7-FM, online and via an app.

“This radio,” Cali said, “is helping, protecting and empowering the voiceless people in the East African community.”

Abdirizak Bihi, longtime Minneapolis activist and host of the weekly Somali Link Radio, also thinks he can change the negative image people have of immigrants and refugees through storytelling. Although KFAI isn’t Somali-owned, it provides airtime to several East African community members, who host bilingual programs.

Since his hourlong show was launched a year ago, Bihi has invited Somali activists, entrepreneurs, artists and elected officials to talk about issues facing the Somali-Americans and accentuate their contributions to Minnesota.