On Tuesday evening, Amina Sharif stood outside the federal courthouse in downtown Minneapolis, trying to process the fact that the nation’s highest court had ruled in favor of President Donald Trump’s controversial policy that bans nationals of certain countries from entering the United States.

She was among hundreds of protesters — including U.S. Rep. Keith Ellison, state Rep. Ilhan Omar and state Sen. Patricia Torres Ray — who stood in solidarity with thousands of Minnesota residents who are unable to be reunited with their loved ones in this country because of the decision.

The ruling, which the U.S. Supreme Court put out on Tuesday, has its roots in a 2017 executive order that had initially barred people from Somalia, Syria, Iraq, Iran, Libya, Sudan and Yemen from entering the U.S. In the back-and-forth legal battle that followed, the Trump administration argued that individuals from these countries pose a national security threat, despite the fact that a series of lower court rulings found that  banning a group of people based on their religion was unconstitutional.

On Tuesday, 18 months after the administration announced the first version of the executive order, that battle is essentially over, as the nation’s highest court upheld the ban.

For Sharif, a 20-year-old Minneapolis native and the daughter of immigrant parents from Somalia, the court’s decision was a painful one.

“This was supposed to be the land of the free,” said Sharif, a senior at the University of St. Thomas. “But this kind of decision makes you believe that people who look like us don’t really belong here.”

Fears of expanding the ban

Since Trump came to power in January 2017, immigrant and refugee arrivals in the U.S. has dropped drastically. One reason is his decision to reduce the cap of the refugee intake from 110,000 to 45,000 a year. Another reason is the immigration executive order, which has restricted the flow of refugees and immigrants from Somalia, Libya and other predominantly Muslim countries on the travel ban list.

Still another reason is that the immigration executive order adds more security steps to the already years-long vetting process, which includes background checks as well as intense security and health screenings. Finally, immigrants and refugees from Iran, Libya, Syria, Yemen, and Somalia haven’t been allowed for months to enter the U.S. without “a credible claim of a bona fide relationship” with a permanent resident in the United States.

While the refugee resettlement program will remain open for business, nonimmigrant travelers — people who come to the U.S. for business, employment, tourism or education — from the seven countries will indefinitely remain barred from entering the U.S. 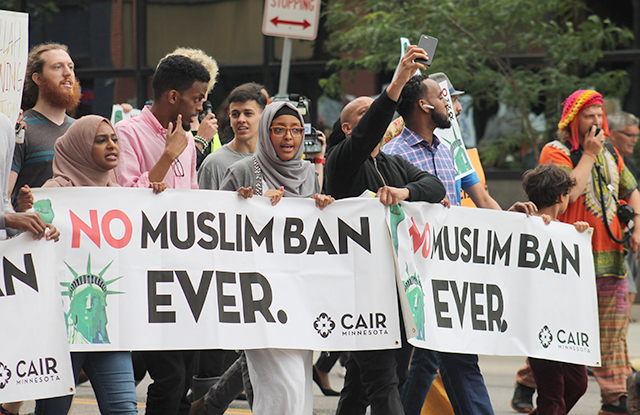 MinnPost photo by Ibrahim Hirsi
Hundreds of protesters stood in solidarity with thousands of Minnesota residents who are unable to be reunited with their loved ones in this country due to the decision.

“If you look at the ban and how it’s been implemented, the goal isn’t to let anybody in the country,” said Amir Malik, civil rights director at CAIR Minnesota. “Even though it takes 10, 20 years for some people to come in, the government thinks there’s a need to do more vetting.”

Malik worries that Tuesday’s ruling grants the Trump administration a blank check to expand the travel ban and prevent more refugees and immigrants from entering the U.S. So does Syed Naqvi, a Pakistani immigrant who showed up to the downtown protest with his wife and five children.

“The Supreme Court’s decision is an indication that … the government can add any country to the list now,” Naqvi said. “For example, if Pakistan or another country does just one thing that Trump doesn’t like, we will be added in there.”

Though the Tuesday ruling on the travel ban mostly impacts immigrants and refugees, CAIR Minnesota Executive Director Jaylani Hussein said that news about the decision alarmed many people in Minnesota, including native-born, non-Muslim residents.

“I want you to look around for a second,” Hussein told the crowd. “I want you to see who’s here. There’s barely any Muslims here. That tells you that what’s important about this issue is that it’s an issue that affects all of us.”

Ellison, the first Muslim elected to Congress, expressed his disappointment with both the Trump administration and the Supreme Court in their respective roles to justify the continuation of the travel ban.

Ellison said that he’s come across many people in Minnesota whose loved ones can’t join them because of the travel restrictions. “People are nervous today because they have loved ones in places like Somalia or Yemen or Iran,” he said. “They would like to unite with them, but this ban makes that impossible.” 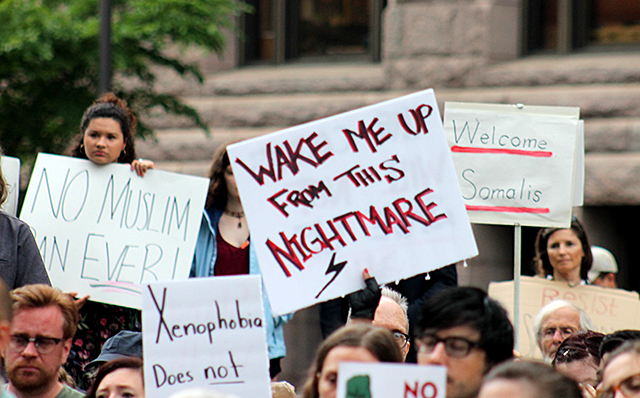 For Sharif, the court’s Tuesday ruling elevates what she sees as ongoing nationwide anti-immigration, anti-Muslim rhetoric that she’s been fighting since she first became politically active during the presidential campaign in 2016.

“I sometimes wonder if they really think Muslims are a threat to the national security,” she said. “We’ve done so much for this country and we’re more helpful than harmful.”