Two decades ago, Loan Huynh, a board member of The Advocates for Human Rights and an immigration attorney at Fredrikson & Byron in Minneapolis, represented an undocumented woman who was separated from her children while trying to seek asylum in the United States.

The federal immigration agency, Huynh said, detained the woman in a county jail in Minnesota while her children — who were under 10 years of age — were held at a detention center in Chicago.

It’s not uncommon historically for border patrol and customs officers to separate minors from their undocumented parents under certain circumstances. For example, government officers can take children from their parents pending verification of a family relationship or if they determine the children are in danger.

Under the Trump administration, however, there’s another reason immigration officials are separating children from their parents: to deter potential migrants from trying to cross the border  between the U.S. and Mexico illegally.

The administration announced the policy last month in response to a growing number of migrants — most of whom are women and children — who are coming to the U.S. from Honduras, El Salvador, Guatemala and Mexico.

In May alone, more than 630 children were taken from their undocumented parents at the Southwest border. In protest against this treatment, Huynh and dozens of other Twin Cities attorneys closed down their firms last Friday and took to downtown Minneapolis streets to raise awareness about the government’s aggressive approach to intentionally separating children from their parents.

“We have an administration that is consciously making a decision to separate families,” Huynh said. “We need to give a voice to these children.”

The immigration advocates and attorneys at the event said that the children and their parents, whom the government wants to apprehend, are vulnerable refugees escaping persecution and violence in their native countries — and must be treated with respect until immigration courts determine their fate.

A legal procedure already in place

David Glaser, a health care attorney at Fredrikson & Byron who organized the Friday gathering, noted that there’s a legal procedure already in place for such migrants seeking asylum in the United States. Indeed, asylum seekers with cases that demonstrate a credible fear are — based on  international law — entitled to a hearing before an immigration judge and should not be treated as undocumented immigrants unless and until they’re denied asylum.

Further, immigration officers were required before this administration’s new policy to “maintain family unity to the greatest extent operationally feasible” unless safety or security concerns necessitated separating children from their parents.

Since the Trump administration came to power, however, customs and border protection officers have torn thousands of families apart — by forcibly separating young children from their parents, according to a recent report by Amnesty International. On Tuesday morning, the United Nations’ human rights office called on the Trump administration to “immediately halt” the practice.

Where the children end up

After they’re captured and separated, a federal law enforcement agency sends the undocumented parents to federal court. Their children, on the other hand, are placed in the custody of the Health and Human Services’ Office of Refugee Resettlement.

The resettlement agency then places the children — along with unaccompanied minors who showed up on their own to the border — in foster care homes or other settings across the country.

When federal officials recently admitted that the U.S. government “lost” last year nearly 1,500 migrant children, pro-immigration activists immediately took it to Twitter and Facebook accusing the Trump government of ripping children from their parents and then losing them.

In reality, though, that wasn’t what happened. First, the children whom the Department of Health and Human Services has lost track of aren’t the ones immigration officers separated from their parents; they’re children who came to the border without their parents. 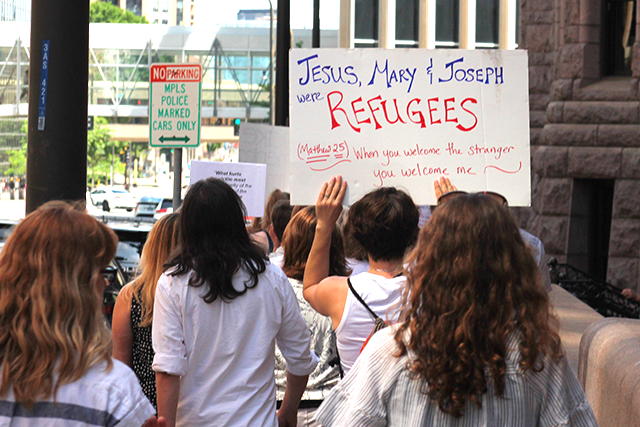 MinnPost photo by Ibrahim Hirsi
The event was part of protests that took place in major cities — including New York City, Miami and Atlanta — across the United States.

Between October and December of last year, the department placed 7,635 unaccompanied minors into homes of their families and close relatives. When officials from the agency called these homes to check up on the children, they learned that 6,075 of them remained in the same households; 28 escaped; five had been deported; 52 got relocated to a different household; and the rest — 1,475 children — were unaccounted for.

Still, it doesn’t mean that the latter group of children is missing; most likely, their guardians simply decided not to respond to the government officials looking for the children.

Whatever the case, the chief reason that attorneys from the Twin Cities marched in downtown Minneapolis wasn’t about who’s missing and who isn’t. It was instead to shed light on what they called the “cruel and inhumane” practice of separating children from their parents.

‘They’re entitled to be treated well’

“If you think about someone who’s walked to the United States from Honduras, they want a better life for themselves,” Glaser said. “Whether we give them asylum or send them back, they’re entitled to be treated well.”

The event was part of protests that took place in major cities — including New York City, Miami and Atlanta — across the United States, demonstrations that demanded the federal government to put a stop to the policy.

For Huynh, the immigration attorney, it was bewildering to see that there’s still a policy that permits officers to take children from their parents — 20 years after representing the mother whose children were held in Chicago.

“What we’re seeing today is the continuation of children fleeing from war-torn nations or nations that are violent,” she said. “We have taken a position as a country to say to these vulnerable children, ‘If you come with your parents, you will be separated from them.’ ”