News headlines these days are filled with dark stories about immigration: children separated from their migrant parents, refugees barred from entering the U.S. and undocumented residents returned to countries they barely know.

But on the tennis court of Matthews Park in Minneapolis, there’s a different kind of story unfolding: half a dozen immigrants from Bosnia, India, Russia and Somalia are catching up on a missed-out childhood experience: riding a bike.

Even in their 30s, 40s and 50s, the student cyclists participate in a month-long program, Learn to Ride, which teaches adults how to bike. It’s a popular program of the Twin Cities-based nonprofit Cycles for Change, which is aimed at increasing diversity among bicyclists in the Twin Cities.

On a recent late morning, Nima Abdirahman, a Somali-born participating in the Learn to Ride program, walked into the training field with a helmet, adjusted the seat of a waiting bike and hopped on it as she examined how students around her biked.

It was the last day of the class, but Abdirahman and some of the student cyclists weren’t exactly where they needed to be to continue biking on their own after completing the program — at least during the first 15 minutes of the hour-and-a-half class.

So when Abdirahman first jumped on the bike, she just couldn’t pedal for five consecutive seconds without wobbling, hitting the brake or resting her feet on the ground.

But each time this happened, she was quick to get back to practice — determined to acquire the skills and the confidence needed to successfully handle a bike. “The most challenging part of the training is that I’m afraid of falling,” Abdirahman said with a laugh. “It’s also kind of intimidating and embarrassing that you don’t know how to bike at this age.”

To give people like Abdirahman the confidence and skills they need to learn how to bike was the reason that the program was started six summers ago in Minneapolis’ Seward neighborhood, home to a large population of East African immigrants.

The Spokes bike center, which merged with Cycles for Change in 2015, initially founded the Learn to Ride initiative after a number of local immigrants and refugees expressed an interest in learning to ride bikes for various reasons, including recreation and transportation.

In its first year, said Cycles for Change Program Coordinator Azul Kmiecik, between 40 and 50 people participated in the program. In the second year, that number nearly doubled; and last summer, Learn to Ride graduated more than 100 students.

Though participants include some native-born Americans, most of them are immigrants and refugees from Brazil, Cameroon, Ethiopia, Ghana, India, Iran, Jamaica, Kenya, Malaysia, Mexico, Puerto Rico, Romania, Somalia, South Africa, Turkey and Uganda.

There are different explanations for why these individuals didn’t get to ride bikes as children. For some, they had fear of bicycles; for some, they were too poor to afford them; and for others, cycling wasn’t common in their communities. 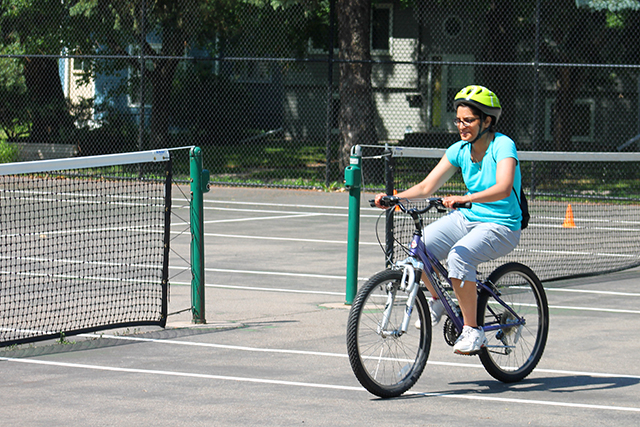 MinnPost photo by Ibrahim Hirsi
When Nima Abdirahman spotted Auntara De, above, another trainee who for the first time managed to pedal around in circles without braking or dragging her feet on the ground, she couldn’t hold back her excitement. “Look at you!” Abdirahman cheered on De. “You’re doing great.”

“I didn’t have a community that was interested in biking,” Abdirahman noted. “It’s just that we don’t put a lot of emphasis on biking — especially when you’re a woman.”

Now as adults, a growing number of people like Abdirahman are turning to Cycles for Change.

The Learn to Ride program is offered from May through September Minneapolis’ Matthew Park and St. Paul’s West Minnehaha Park. Each class takes 13 students, who spend four weeks learning to ride. This means the program graduates at least 100 bicyclists over a period of five months.

“There’s some stigma and shame around being an adult and not knowing how to bike,” Kmiecik said. “So it’s important for us to get them together in one place where they can learn from each other.”

At the tennis court that morning, the student cyclists gave one another tips to improve their pedaling skills — and cheered on when a student glided along without difficulties.

When Abdirahman spotted Auntara De, another trainee who for the first time managed to pedal around in circles without braking or dragging her feet on the ground, she couldn’t hold back her excitement.

“Look at you!” Abdirahman cheered on De. “You’re doing great.”

As a child, De tried to bike a couple of times. But each time she did, she would lose her confidence and experience a sudden breakdown. “I just didn’t trust it,” she said. “I don’t know why I was like that.”

Then recently, when De moved into a bike-friendly residential neighborhood in Plymouth, she started thinking about biking again. But she wasn’t sure where to start until she learned about Cycles for Change on the internet.

She then signed up for the Learn to Ride program, making her bike debut in the first week of June. “Here we have a comfortable environment where everybody starts almost at the same level,” she said.

On June 30, the final day of the class, De reached the goal she set to achieve: she mastered riding a bicycle in four weeks. In addition, De learned how to adjust the bike saddle, check the air pressure in the tires and keep a bike in good condition. 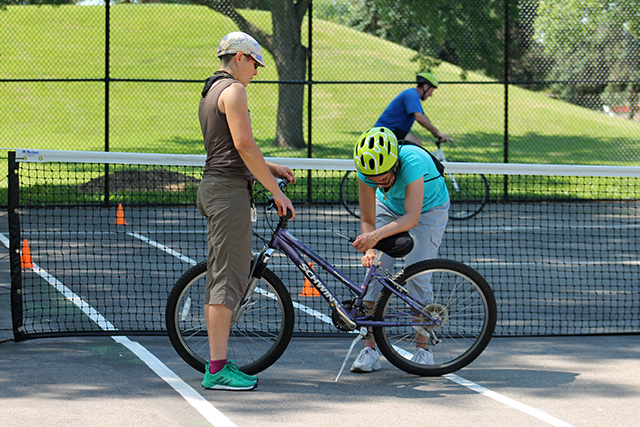 Among other trainees who also achieved a similar milestone on that day was Elena Oruc, an immigrant from Russia who had never tried biking until she attended the Learn to Ride class this summer.

Now, after four weeks of training, Oruc feels comfortable biking on the tennis courts. But in the weeks to come, she plans to take her newfound hobby to the streets. “This is my last week,” she said. “I can ride the bike in my neighborhood after today.”

Like De and Oruc, Abdirahman was no longer wobbling or dragging her feet on the ground during the final hour of training on the tennis court. As instructed, she was finally able to look ahead, maintain balance and pedal with ease as maneuvered her way around the field.

But Abdirahman isn’t yet done. Next, she plans to teach her 13-year-old daughter how to ride and encourage other Somali women, who didn’t get to bike as children, to sign up for the class. Which is the reason she’s been posting on social media about her experience with Learn to Ride in the hope of inspiring some to try biking.

“People are sometimes embarrassed to admit that they can’t bike,” she said. “But I tell them, ‘Hey, I might be cool, but I don’t know how to bike. If you’re like me, here’s the link, go learn how to ride.’”

Immigrants often have a lot to learn when they come to the U.S. — including, for some, how to ride a bike