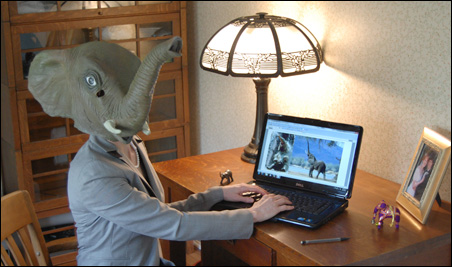 Courtesy of Michael Dorneich
Professor Patricia Pachyderm is ready to make her point.

Professor Caroline Hayes admits she’s about to do something “very silly” at Thursday’s colloquium of the Women’s Faculty Cabinet at the University of Minnesota.

Hayes plans to dress up as Professor Patricia Pachyderm, sporting pearls and a latex elephant mask she found online. As outgoing chair of the cabinet, she will introduce the guest speaker at the spring gathering.

So, what’s with the elephant head? Hayes says she wants to have a little fun yet make a point about the “elephant in the room,” i.e. the implicit gender bias that continues across college campuses and society at large and results in inequities despite laws to correct them.

“First, many people feel that elephants are not qualified to be faculty,” Hayes explains in an email invitation to friends and colleagues. “Second, even when we are faculty, many assume we are willing to work for peanuts, and they fail to mention us even when we are sitting in the middle of the living room.”

Analyzing the gap
How wide is the gender gap — in pay, tenure, promotions, etc. — at the Twin Cities campus? The Women’s Faculty Cabinet, with the help of the university’s institutional research office and the provost’s office, has been analyzing data and surveys and hopes to draw some conclusions this summer.

“I don’t necessarily view us as very different from a lot of other institutions,” says Hayes, a professor of mechanical engineering. “Our goal is that we want to have the healthiest atmosphere possible, and to do so, you have to know where you stand. I think we have a very widespread issue concerning women in this country … and how they are valued and treated and paid.”

As of 2008, the U.S. Census Bureau calculated that women on average earned 77 cents to every dollar paid a man.

Could implicit gender bias be a factor? That’s what Borgida, a professor of psychology, will address Thursday. According to the program notes, “The science of implicit cognition is grounded in decades of research in cognitive and social psychology showing that people’s expectations based on learned contingencies unknowingly affect everyday perceptions, judgment, memory, and behavior. Mental processes about individuals and groups, as this work suggests, can operate implicitly, or outside of conscious, attentional focus.”

Borgida will look at the implications of the “perceptions and evaluations of women in leadership positions; understanding the extent to which implicit biases about gender may influence Science, Technology, Engineering and Math (STEM) career choices and career aspirations, and employment law cases involving sex discrimination claims under Title VII of the 1964 Civil Rights Acts.”

Addressing perceptions in middle school, too
Hayes, mother of an 11-year-old girl, also is working with Borgida, photographer Nancy Johnson and others on a proposed outreach project to study whether they can change middle-school girls’ perceptions of careers in engineering and science.

“The reason we want to target that group is … it appears that middle school is the age when many young girls start to turn away from engineering and science, and we want to catch them at that age before they have firm ideas of who can or cannot be an engineer,” she said.

Hayes hopes to draw a big crowd for the spring colloquium. The elephant concept arose last fall in a discussion of how to call more attention to the gender gap and/or implicit bias. Talk turned to the Guerrilla Girls, the artists who started donning gorilla masks and showing up at male-dominated galleries and exhibitions in the mid-1980s.

“We thought maybe we need the equivalent of a Guerrilla Girl here,” she recalls. A theater member of the cabinet suggested that they create their own alliterative brand. While “Elephants for Equity in Higher Ed” might be a mouthful, it’s a reminder of the invisibility problem.

It will be difficult to overlook Hayes, um, Pachyderm in the President’s Room, Coffman Memorial Union. But she wants to make one thing clear: She is not a party animal. “I am an equal opportunity, across-the-aisles elephant.”