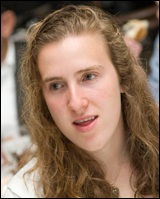 College just became less expensive for Hannah Borowsky, a junior at Hopkins High School in Minnetonka, and for her parents.

Hannah, 17, won the $35,000 scholarship in the Young Epidemiology Scholars (YES) competition for her research on teen smoking.

And she has a paid lab internship — not the slave-labor internships so many college students face these days — lined up this summer in the University of Minnesota’s Department of Experimental and Clinical Pharmacology.

Hannah’s ahead of schedule. College recruiters, take note: She hasn’t picked a college yet. The Robert Wood Johnson Foundation and the College Board, sponsors of the YES competition, certainly are impressed with her potential.

Hannah was among 60 regional finalists to present research over the weekend to a panel of public health experts in Washington, D.C. She placed second after a 12-minute PowerPoint presentation, an intense 10-minute Q&A session with judges, and submission of her 30-page analysis in February. The top-six placers won scholarships ranging from $20,000 to $50,000, six other finalists took home $15,000 scholarships, and the remaining 48 finalists received $2,000 each. More than 600 high-school students entered the competition.

What kinds of questions?

“They press you to think about the implications of your results. They’d say, ‘You have great results but what does that mean for public health and how will you use it?’ ”

Hannah heard about the YES competition last October and started thinking about a research topic. This would not be a school assignment or project; she would have to work on her own time and learn computer analysis techniques.

“The cancer risks are so well known yet so many adolescents smoke,” she said. “They’re risking their lives for a cigarette, and I wanted to get inside their heads and see what they were thinking. … I couldn’t believe anyone would smoke because it’s so risky.”

Hannah thinks her findings could be useful in deterring adolescents from smoking by targeting different groups.

“My study found that smokers who reported receiving information about drugs and alcohol from their friends perceived a higher risk of smoking,” she said. “I also found different groups of smokers who think smoking is less of a risk,” in particular younger teens, males, African-Americans and those having a lower GPA.

Just as peer pressure can lead adolescents to risky behavior, it also may prevent them from engaging in it. And they’re more likely to listen to their peers than their parents about the risks of smoking.

Science, medicine, politics?
For as long as Hannah can remember, she has been interested in science. Her parents, Iris and Steve Borowsky, are physicians. She has been a winner in the statewide science fair. Medicine and biochemistry are appealing, but she’s also keen on politics and writing. She says writing that 30-page paper was fun. And now her interests are expanding to public health.

“I really like the idea of public health as a way to affect a lot of people and to mix politics with science and public service,” she said.

Perhaps a future surgeon-general may hail from Minnesota someday. This likely would suit the Robert Wood Johnson Foundation, which established the YES competition in 2003.

“With the nation facing a potentially catastrophic shortage of public health professionals, it is critical that we cultivate the next generation of public health talent,” said Risa Lavizzo-Mourey, president and CEO of the foundation, in a press release. “These students’ outstanding work demonstrates that the future of epidemiology holds great promise.”