The Minnesota State Colleges and Universities system appears to have turned increasingly to temporary and adjunct faculty as its student enrollment grew 20 percent between 2000 and 2009. Even so, MnSCU’s number of tenured and tenure-track faculty — by far the biggest group among its seven four-year universities — grew 17 percent to 2,092 in that period, slightly outpacing a 15 percent enrollment increase in those schools.

The proportion of tenured/tenure-track faculty in the period was up about 2 percentage points to 56.6 percent, but down a point since 2005.

Meanwhile, adjuncts, who typically receive no health insurance and very few employee benefits, grew 13 percent to 1,108. Adjuncts are now the second-largest group of faculty at MnSCU’s four-year institutions. The third-largest contingent is called “fixed term” faculty, who are hired on one-year contracts. Although the number in that group fell 2 percent from 2000 to 2009, it’s up 3 percent since 2005.

This is part of the story emerging from my analysis of head counts provided by MnSCU. I requested faculty counts from 2000, 2005 and 2009, sliced and diced by every classification as well as by four-year institutions and community and technical colleges. You’ll see my full analysis later in this post. One thing to keep in mind is that these figures are through March 1 of each year, so no telling how much things have changed since March 2009 in the state’s whack-a-mole budget crisis.

Part-time adjuncts up 33% at community/tech colleges
The shift to temporary faculty is even more pronounced in MnSCU’s 25 community and technical colleges, where enrollment surged 22 percent since 2000. The number of temporary/part-time adjuncts increased 33 percent to 2,186, the second-largest category among faculty. Meanwhile, the number of “unlimited full-time” faculty, who hold the best positions in terms of job security, has declined 4 percent to 2,816. Since 2000, the proportion of unlimited full-time faculty dropped more than 11.5 points to 54.4 percent.

I emailed my spreadsheet to a MnSCU spokeswoman, hoping an administrator would comment on the trends.

“It’s too difficult to draw any meaningful conclusions from it,” spokeswoman Melinda Voss told me after checking with administrators and number-crunchers. “The numbers alone don’t give you enough information to draw any conclusions. There are a lot of factors that go into making up the numbers … programs opening and closing, budget constraints, contract provisions.”

Weighing the impact of adjuncts
One example of a factor comes from Don Larsson, president of the Inter Faculty Organization, the state union representing faculty at MnSCU’s four-year institutions. While the number of adjuncts increased 13 percent, he said, they don’t carry the same full-time equivalent load as tenured, tenure-track and fixed-term faculty.

The IFO contract restricts adjuncts to teaching one to three classes per semester. “The fact that we have those credit limits means universities have to hire more bodies to teach more courses,” said Larsson, a 30-year-plus professor of English who is on a two-year leave from Minnesota State University Mankato while he runs IFO.

My quest for tenure numbers started after I read a July 4 story headlined “Tenure, RIP” in the Chronicle of Higher Education. I wanted to know if tenure is dying here, too. The Chronicle reported that 31 percent of faculties across the nation were tenured in 2007 compared with 57 percent in 1975. I couldn’t get state data dating to 1975, but at least we know that Minnesota’s public institutions are ahead of the nation in percentage of tenured and tenure-track faculty.

How far is the fall from that cliff?
Still, observers are worried about what has come to be known as “the cliff.” The state is projecting a $5.3 billion budget deficit in the next biennium. Higher-education appropriations already have been whacked in recent years and observers wonder how far is the fall from that cliff. MnSCU said last year that it would cut 550 jobs (across all job classifications) in the biennium ending June 30, 2011. And this week state finance officials proposed delaying $89 million in aid to the U of M until next summer.

At Minnesota State Mankato, a dozen tenured and tenure-track faculty are expected to receive individual letters that their jobs will end in May 2011, Larsson of the IFO said. Mankato is cutting 80 faculty positions mostly through attrition but 12 likely will lose their jobs, he said. Tenured faculty can be let go when a financial emergency is declared or a retrenchment is under way.

“I think Minnesota, in general, and Minnesota State Colleges and Universities have been fortunate to have been in a culture that has, up until recently, shown it values higher education,” Larsson said.

The impact of losing faculty and/or shifting to temporary faculty is felt in unlikely places. In early April, I wrote a story about a coalition of nonprofit groups that won a federal grant to help qualify 4,000 children for public health-insurance programs. One of the groups is St. Cloud Area Legal Services, which helps people of all ages navigate the complicated application process.

“We’re starting to see people at one of the colleges or tech schools because their employers are hiring them on as adjuncts and they don’t offer benefits,” Ralonda Mason, supervising attorney, told me at the time. “These are people with Ph.D.s or master’s degrees … who never really anticipated they’d be in a position where their jobs didn’t provide access to insurance or the financial means to get insurance in the private market.”

So, why else is tenure so important to faculty other than job security and benefits, and the freedom to teach controversial topics and pursue politically charged research (stem cells, for example)?

“Most administrators — the responsible ones, anyway — understand that it becomes a losing proposition when they keep hiring too many contingent faculty on a short-term basis,” Larsson said. “You wind up shortchanging the students. I personally know many fixed-term and adjunct faculty who are tremendously good teachers. … At the same time they can’t give the kind of ongoing attention to students, their classes and their own professional development” in their academic discipline and department because of the short-term nature of the job.

Readers: My hunch is that even though MnSCU doesn’t think “meaningful conclusions” can be drawn from the numbers, some in the academy will be able to draw their own conclusions. Please contribute your thoughts in the Comments section below or email me at cselix[at]minnpost[dot]com. As always, I am open to suggestions on how to analyze the trends and what types of data to request in the future. 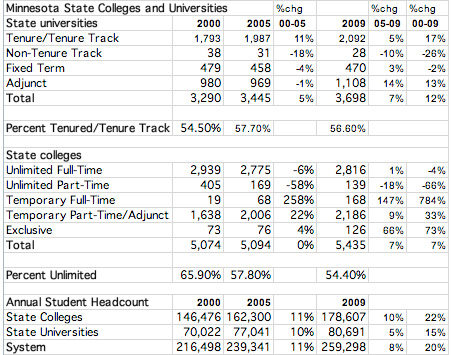 * Employee numbers are as of March 1 of specified year.

MinnPost analysis: Tenured/tenure-track positions and temp teachers on the rise at MnSCU institutions