It stands to reason that the University of Minnesota Twin Cities campus would attract the most out-of-state students given its reputation and the state’s reciprocity agreements. But which private college or university here draws the most students from other states?

I would have guessed Macalester or Carleton off the top of my head. St. Olaf College actually drew the most enrollees from other states in fall 2008, according to a November 2009 study by the Minnesota Private College Research Foundation.

Carleton, Macalester, University of St. Thomas and Concordia College in Moorhead rounded out the top five in out-of-state enrollment in private colleges in 2008.

I found myself drawn to the report’s various lists of our public and private institutions that appeal to out-of-state students as well as which out-of-state schools attract Minnesota’s high-school graduates.

Out-migration outpaces in-migration
Manning says the report hasn’t received much media attention but it points up a trend and a problem. “Over six years, the data have consistently shown that more students are leaving Minnesota than come here for college — a net loss,” according to the report.

Between 2003 and 2008, 67,675 Minnesota high-school students chose to go out of state for their higher education. In that time, 36,218 out-of-state students enrolled in Minnesota schools. That out-migration vs. in-migration produced a net loss of 31,457. It appears we have a trade imbalance.

“Minnesota is a net exporter of college bound students annually,” the report notes. “And while research of the labor force implications for Minnesota is not available, states that have examined the choices of college graduates indicate that students typically stay where they receive their degree. A large part of this decision is the economic opportunities available in the state.”

In other words, Minnesota’s employers may have lost out on as many as 31,457 college-educated students in those years but the data aren’t available to make that conclusion. Given the recession and slower job growth during those years, maybe a net loss isn’t that troubling. But it’s the horizon that worries demographers.

“As Minnesota’s labor force shrinks and the need for college educated individuals increases — it would be important to know if Minnesota retains college graduates and if our high school graduates earning a degree in other states come home,” the report concludes.

A recent report out of Georgetown University also warns that Minnesota ranks 2nd in the nation in its need for a well-educated workforce by 2018. 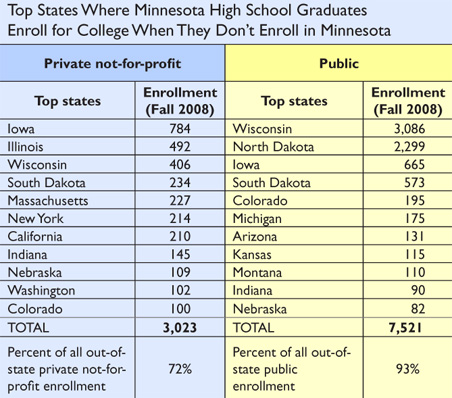 Back to those lists
The Minnesota Private Colleges report relied primarily on data from the National Center for Education Statistics. Remember that these rankings are based on 2008 fall enrollments. Also, I’m listing just the top five in each category (except for above chart). The report offers longer lists.

So, which out-of-state private colleges or universities draw the most Minnesotans? Luther College in Iowa is No. 1, followed by Augustana (South Dakota), Drake University (Iowa), Marquette University (Wisconsin) and DePaul University (Chicago).

The report doesn’t go into reasons why Minnesota appears to be exporting more students than it is importing. Could it be the rising tuition costs in their home state after years of reduced budget appropriations for higher education? Feel free to speculate in Comments below.

Interested in seeing the entire lists? Check out the report. [PDF]