News
From Other Nonprofit Media

From Other Nonprofit Media showcases select work from other nonprofit news sites around the nation.

The tragic, high-profile killings of George Floyd and other Black Americans in 2020 have sparked a reckoning on race. As researchers of philanthropy, we’re keeping an eye on how this national awakening is affecting charitable giving across the nation.

We are seeing an outpouring of donations from individuals, corporations and foundations that began to grow as soon as protests and other activities in support of racial and social justice started to spread across the country.

Much of this funding will likely support Black-led groups engaged in criminal justice reform and fighting for education equality. Wealthy donors in the first half of the year gave nearly $6 billion in donations of $1 million or more, but people of at various income and wealth levels are also increasingly supporting racial equity causes and organizations.

The GoFundMe pages crowdfunding to seek justice for George Floyd, Ahmaud Arbery, Breonna Taylor and Jacob Blake have all attracted at least $1 million so far.

Floyd’s GoFundMe memorial campaign has garnered more donations than any other campaign in the online platform’s history, raising over $14 million with 500,000 individual donors from 140 countries worldwide. Many of these gifts to the impacted families of police violence were for $5 and few were for $50,000 or more. 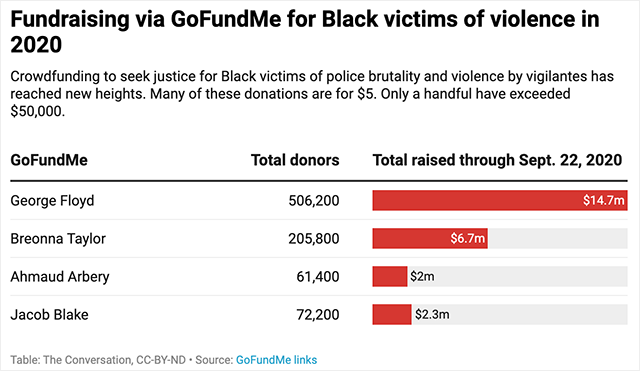 After Memorial Day weekend, when Floyd died while in custody of the Minneapolis police, many Black-led grassroots organizations began to draw much higher levels of support as the protests garnered more participation and attention.

For example, when protests erupted, the Minnesota Freedom Fund, which advocates for a more equitable system of cash bail, turned its attention to bailing out arrested protesters. Once the fund reached a total of $20 million in donations, its organizers urged donors to support Black-led organizations.

Other grassroots organizations and networks also received support, such as the National Bail Fund Network, which received $80 million in donations in late spring.

Even before the protests erupted, the Movement for Black Lives had received $5 million in the first five months of 2020 to support Black communities affected by the pandemic and to address broader issues of racial equity. This was nearly double the $2.7 million the group, founded in 2014 following the death of Michael Brown in Ferguson, Missouri, raised in all of 2019, according to the Chronicle of Philanthropy.

The Libra Foundation announced that a dozen grant-making organizations were joining together to give a total of $36 million to Black-led organizations and social movements like The Black Youth Project and the National Black Food and Justice Alliance.

These numbers provide only a partial estimate of total giving to these causes, and it will take at least until mid-2021 for the IRS to begin to release the official records and statistics needed for a fuller picture of giving to these groups. Based on data from Candid, a research group, institutional funders and large donors have contributed $5.9 billion for organizations primarily engaged in in racial equity work to date.

Historically Black colleges and universities, often called HBCUs, and related groups that fund scholarships for the students who attend them, are getting more donations in 2020.

HBCUs in the past received fewer donations of $1 million or more than other institutions, a pattern our colleague Tyrone Freeman has been studying for years. As a result, HBCU endowments are relatively small.

All told, the roughly 100 HBCUs have a total of only $2 billion in their endowments. By comparison, 54 predominantly white colleges and universities have $2 billion or more in their own endowment. 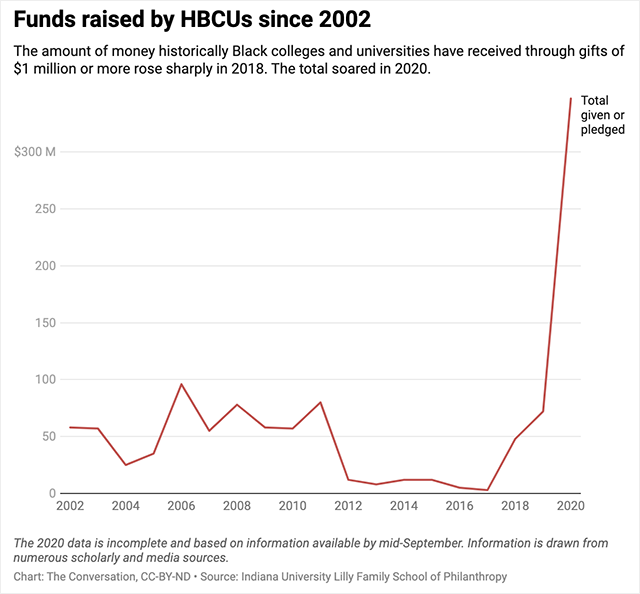 In 2018, for example, there were seven of these major gifts totaling $48 million. In contrast, there were at least 33 of these donations by mid-September of 2020, totaling $347 million, according a list of these donations of $1 million or more compiled by The Chronicle of Philanthropy and tracking by statistician Xiao Han of additional news reports and public information disclosed by donors and the schools.

Corporate giving for Black colleges and other causes is also on the rise. In early June, the Financial Times reported that Microsoft, Google, Amazon and other large corporations had recently pledged at least $458 million to support progress toward racial equity, including support for higher education. All told, Apple has said it donated $100 million or more to assorted racial equity initiatives. 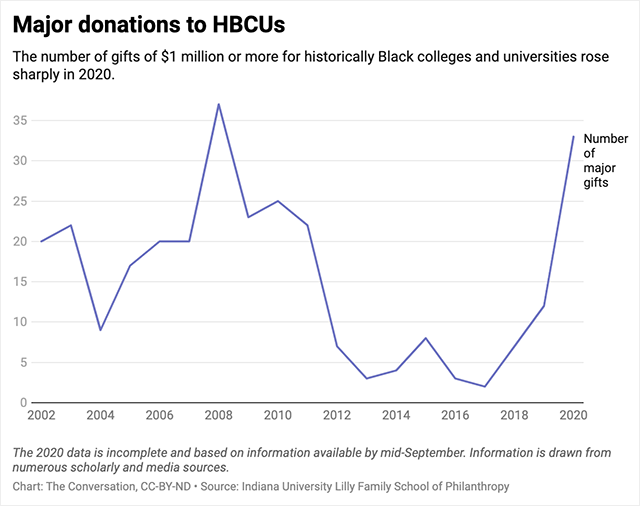 4. Black philanthropists are leading the way

Donors from all backgrounds have turned their attention to increasing calls for racial equity. While new donors are turning their giving to racial equity issues, wealthy African Americans have contributed to causes that support racial justice and equity.

In recent years, we have continued to see affluent Black people, such as the entertainer and fashion icon Rihanna and basketball great Michael Jordan, make significant philanthropic commitments.

Along with other colleagues at the Lilly Family School of Philanthropy and in partnership with the Bank of America, we are conducting a long-term research project regarding affluent donors. Based on our findings in our 2018 report, at least half of all wealthy Black donors supported African American causes, compared to 6.5% overall of all surveyed donors.

Additionally, 43.8% of the wealthy Black donors surveyed indicated that they made giving to groups that aim to improve race relations a high priority, as opposed to an average of 5.7% all donors.

That means established civil rights organizations such as the NAACP and the Urban League, and newer racial justice groups like the Equal Justice Initiative, which aims to end mass incarceration and advance racial equity, and the Center for Policing Equity, a think tank focused on improving racial equity within police departments, are all getting a boost.

Kim Williams-Pulfer is a postdoctoral research appointee at the Mays Family Institute on Diverse Philanthropy at IUPUI. Una Osili is a professor of economics and philanthropic studies and associate dean for research and international programs at the Indiana University Lilly Family School of Philanthropy, IUPUI.