This story was originally published by Stateline, an initiative of The Pew Charitable Trusts.

Terry Kilgore has been a Republican member of the Virginia House of Delegates since 1994. During that time, there have been four years in which the GOP controlled the governor’s office and both chambers of the legislature. For two years, Democrats held complete control.

In the other 23 years, Republicans and Democrats have shared power in Virginia, as they will this year. That has given Kilgore, currently House majority leader, a perspective on state government that is increasingly rare.

“Unlike the federal government, state governments have to do certain things. We have to pass a budget. We have to keep government running. We have to fund police officers and teachers and etc., so we have to try to come to a middle ground on a lot of issues,” Kilgore said in an interview with Stateline. “I have to tell my caucus every day, ‘You’re not going to get 100% of what you want … a half a loaf is better than no loaf.’”

With the GOP’s takeover of the U.S. House, Republicans and Democrats once again share federal power across the executive and legislative branches, as they have for all but a dozen years since Ronald Reagan became president in 1981. As the national parties have become more homogenous and polarized, that has tended to mean gridlock and dysfunction in Washington, D.C.

Divided rule used to be common in the states as well, but with very different results: State legislators worked across the aisle and with governors to get things done. Compared with members of Congress, they focused more on the needs of their constituents and less on political posturing and preening for the media.

After the midterm elections, there are now 40 states where one party controls the governor’s office and holds majorities in both chambers of the legislature, a so-called trifecta. (Nebraska has a nonpartisan unicameral legislature, but the governor is a Republican and lawmakers are overwhelmingly conservative.)

That leaves 10 states with divided government — the fewest since 1952, according to the National Conference of State Legislatures, a national research nonprofit serving state lawmakers, which began tracking the number in 1938. As recently as 1996, there were 31.

In short, the political polarization that has become the norm in national politics has infected state government: More than 80% of Americans now reside in a trifecta state, according to Ballotpedia.

Dominant state parties and shrinking statehouse media coverage heighten the risk that a “lack of accountability will lead to less responsiveness to the public — and potentially more corruption,” Richman said.

But to some extent, political scientists say, one-party dominance is nothing to worry about: Texans are more conservative than Californians, New Yorkers more liberal than North Dakotans, and state governments should reflect that. 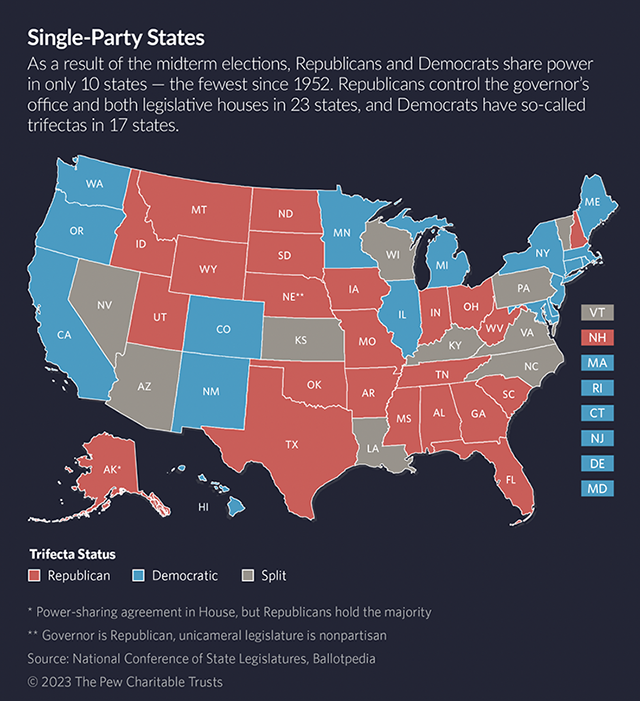 Tim Storey, chief executive officer of the National Conference of State Legislatures, asserted in an interview that while hyperpartisan debates over abortion, guns and transgender issues tend to attract the most attention, more than 85% of the final votes on state legislation are bipartisan. Furthermore, Storey said, even in single-party states, the chambers often are at odds with each other or with the governor.

“Yes, the states are one-party controlled, but they don’t always function that way,” he said.

In the past couple of years, Storey argues, the pendulum has begun to swing away from “the fringes of both parties that just want to be destructive and make pithy comments and own the other side.”

But as Stateline has reported, at its annual meeting last year, the organization held two sessions for state legislators on overcoming partisan acrimony. And there’s no denying that a trifecta party can act with little or no input from the other party, enacting far-reaching policies that might be anathema to many, or even most, of the state’s residents.

For example, Republican-dominated Tennessee enacted a strict abortion ban last year. But a poll taken after passage of the law shows that 75% of Tennesseans believe abortion should be legal in cases of rape and incest, and now key GOP leaders say they want to amend the law to include those exceptions.

Meanwhile in Democratic-dominated New York, Democrats in 2019 used their trifecta to eliminate cash bail for most crimes, overriding GOP objections that doing so would compromise public safety. But amid rising gun violence and opposition from law enforcement and local leaders — including Democratic New York City Mayor Eric Adams — Democrats have twice revised the law to give judges more discretion.

In most states, legislators are disproportionately White and male, compared with the state’s overall population. However, nearly half of Democratic state legislators in the country are women, while fewer than 20% of GOP lawmakers are. GOP legislators also are less racially diverse than Democrats, raising questions about whether the interests of minority groups and women are well represented in the 23 states with a GOP trifecta.

Tessa Provins, an assistant professor of political science at the University of Pittsburgh, said longstanding dominance by either party can mean a lack of representation “for people who are red in blue states and blue in red states.” However, it’s a particular problem for women and minorities in GOP-dominated states.

Furthermore, complete control by one party can empower its most extreme members, who might care more about posturing on hot-button issues than enacting policies designed to benefit the greatest number of people.

“What we’re seeing now is national battles being acted out through state governments,” said Jacob Grumbach, an associate professor of political science at the University of Washington and the author of a new book, “Laboratories Against Democracy: How National Parties Transformed State Politics.”

“In short, activist groups, media, donors, and others invested a lot in national politics, which led to polarization and gridlock in the federal government,” Grumbach wrote in an email to Stateline. “And in bumping up against that new gridlock at the federal level, those same political actors shifted focus to the state level and made state governments part of the national tug of war over the direction of the country.”

Unlike in Congress, where the minority party can use the filibuster and other tools to impede the majority, state legislative minorities tend to have much less power, pointed out Seth Masket, a political science professor and director of the Center on American Politics at the University of Denver.

“If someone is offered a job in a different state, far more so in the past, they have to think about what kind of social services are they going to get in that state, what is the tax rate going to be like, what are gun laws and abortion laws and other things going to be like, because those things will be very different depending on where they choose to live and could really affect their lives,” Masket said.

Presumably, he added, the majority party will lose power “if a government is doing things that nearly half or more than half of the state finds horrible.” But that might not be the case, he said, if the dominant party draws legislative districts or changes voting rules to preserve its dominance far into the future — regardless of the population’s preferences.

Sean Westwood, associate professor of government at Dartmouth College and director of the Polarization Research Lab, said the rise in the number of trifectas might reduce polarization by dampening political conflict. But like Masket, Westwood told Stateline he was deeply concerned about gerrymandering.

“It’s one thing to see that your vote was counted, but it just wasn’t enough to get control for your party, versus knowing that there’s no way your party could ever win because of structural biases.”

In Virginia, voters don’t need to worry much about their party being shut out of power — at least not for long. Since 1994, neither party has completely controlled the governor’s office, the House and the Senate for longer than two years.

That volatility breeds a certain kind of lawmaking, according to Virginia state Sen. George Barker, a Democrat who took office in 2008. When power is shared, Barker said, “you really have to work hard to come up with something where you can get strong support in both parties.”

And even in those rare instances when one party controls all the levers of power in Virginia, Barker said, the majority knows that if it goes too far, “you’re going to get a lot of undoing of things” once the roles flip again.

Barker cited last year’s debate over the two-year state budget as a model of bipartisanship. Democrats controlled the Senate, while Republicans held the governor’s office and the House. Each chamber approved a bill, and then the two parties started talking, including Gov. Glenn Youngkin in the discussions. After three months of negotiations, the legislature approved a plan in June with both tax cuts and spending increases. The final vote: 88-7 in the House and 32-4 in the Senate.

“We came forward with a bill that had enough for both Republicans and Democrats that the public was probably supportive of it,” Barker said.

Kilgore, the Republican House majority leader, also praised Virginia’s recent budget process. A split state government, he said, produces “laws that have really been examined, looked at, discussed, argued, language agreed upon, language appraised back and forth. … I think it makes for laws that can stand the test of time.”

But even in Virginia, Kilgore said, partisan acrimony is worse than it used to be.

“When I came to the General Assembly, we were like wrasslers — we’d fight it out on the mat and then behind the scenes we were good friends, and we’d go out to eat and everything. I think we’re missing that in politics,” Kilgore said. “The population as a whole — everybody wants to go to their corner, and everyone wants to have it their way or no way.”

Shared power used to be the norm in statehouses. Now it’s nearly extinct.