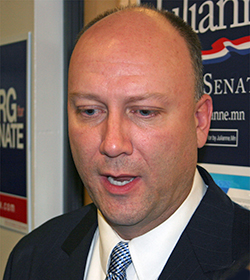 There was only one unknown in the gubernatorial straw ballot taken at the Minnesota Republican party’s state central committee Saturday in Blaine. How strong a showing would former state Rep. Marty Seifert make as a write-in candidate?

The answer was very strong, a result that seemed to surprise even Seifert himself.

Johnson, a national committeeman well known among this small group of activists, was expected to win. Both he and Thompson said they would abide by the endorsement process, so Thompson’s close second was also anticipated.  Honour and Zellers have said they will battle the endorsed candidate in a primary, a big factor in their poor showings.

But Seifert, a candidate for governor in 2010 who lost the Republican endorsement to Tom Emmer, was a write-in. There were no Seifert signs, no Seifert handlers. As a state central committee member, he sat quietly with his Marshall delegation, making no overt attempt to politic.

“Certainly, I didn’t spend a penny; I don’t have a campaign committee,” he said shortly after the poll was taken.  “It’s very humbling, to be honest, and a bit surprising. I usually think of these things as an organized effort.”

By contrast, front-runner Johnson acknowledged, “I’ve been making calls to Republicans since I got in the race.”

Seifert still has friends and supporters in the inner circle of state GOP activists. And many of those supporters still maintain that had Seifert been the Republican nominee in 2010, he, not Mark Dayton, would be governor today.

Seifert said he would make a decision whether to enter the race by Thanksgiving. He gave a small hint as to where the scale was tipping, at least for now.