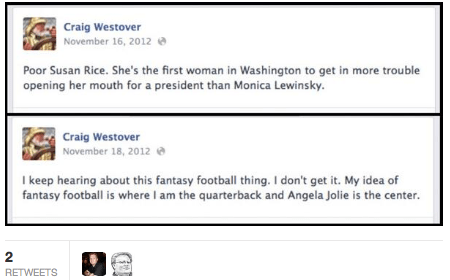 The Jeff Johnson campaign for governor could take it as a compliment.

The group pulled out two “extremely sexist and offensive remarks” from Facebook posts that Westover had sent almost a year ago and put them on its website with the headline “Meet Jeff Johnson’s Sexist Staffer.”

Post one, Nov. 16, 2012: “Poor Susan Rice. She’s the first woman in Washington to get in more trouble opening her mouth for a president than Monica Lewinsky.”

Westover composed the posts long before he joined the Johnson campaign, in fact, before Johnson had a campaign at all.

Westover did not apologize. “There’s no expectation of privacy on the Internet, there’s also no expectation of not being offended,” he said.  “What I put there is what people volunteer to follow. If they don’t like it, they can un-follow me.”

Opposition research, like searching social media, is usually aimed at candidates, not staff members. Johnson might find some comfort that research so far has turned up little from his past. Furthermore, that Westover is a target suggests Johnson has become enough of a threat in the contest to unseat Mark Dayton that ABM decided to dig for a speck of dirt.