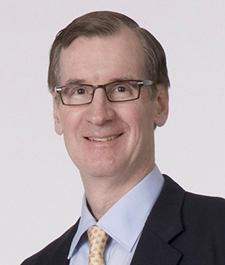 A possible Democratic challenger to Third District Republican Rep. Erik Paulsen has surfaced. He is Minneapolis and New York businessman James A. Lawrence.

In a poll conducted by Kalamata Research, a Florida-based company, Lawrence was identified as a Democrat and a former executive with Northwest Airlines and General Mills. The pollster has been calling residents in the Third District with a 10-minute survey that asks general questions about party identification and opinions about President Obama and Congress. Then the poll zeroes in with specific questions about Paulsen and his votes on the government shutdown and budget cuts.

The poll also appears to be testing messages that Lawrence’s team may be considering.

When contacted, Lawrence was cordial but offered only “no comment” on his political future.

Lawrence, 60, holds an impressive resume. He is listed as CEO of Global Investment Banking of Rothschild North America in New York. With business degrees from Yale and Harvard, he served as General Mills’ chief financial officer from 1998 to 2007. Prior to that he held the same post at Northwest Airlines. He was also a partner at Bain and Company, the consulting company where Mitt Romney was CEO.

Lawrence is a member of multiple corporate boards, including Apple, a trustee of the University of Minnesota Foundation, and a member of the board of directors at the Minnesota Orchestra.

Democratic recruiters have said the government shutdown gave them an opportunity to field credible candidates in swing districts like Minnesota’s Third. Lawrence could be that kind of candidate. A preliminary poll would show whether he has a reasonable path to take on Paulsen in 2014.