Even though most polls place Sen. Al Franken and Gov. Mark Dayton in safe territory for re-election, most Republican activists don’t believe them. That’s why this weekend, at the Republican Party state convention in Rochester, political pragmatism may prevail over the usual Hatfield-McCoy games that delegates play.

The best setting for this theory is the U.S. Senate endorsement. There are seven candidates; four are taken seriously and, after a few ballots, the 2,200 delegates will make their choice between two: Julianne Ortman and Mike McFadden.

Ortman has stressed her opposition to Obamacare, her support of gun rights, her opposition to NSA surveillance techniques, and her contention that U.S. policy is best directed by following the Constitution. She supports the party platform on opposition to abortion and same-sex marriage. Sarah Palin, still a conservative sweetheart for many delegates, has endorsed her.

If the delegates had any suspicions about Ortman, about some of her more middle-of-the road votes as a state senator, about why she wasn’t endorsed when she ran for the state senate in 2012, they may be reassured by her choice of campaign director. Andy Parrish served in the same position and also as a chief of staff for retiring Congresswoman Michele Bachmann. 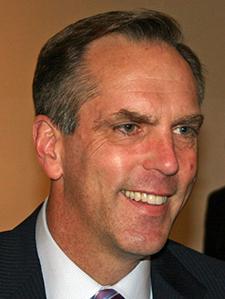 McFadden has chosen not to compete with Ortman, or fellow candidates Jim Abeler and Chris Dahlberg, on experience or conservative credentials. He’s drawn criticism, even among activists, that he has been too vague on issues and positions. He indicated from the day he announced his candidacy, he would go to a primary, if not endorsed.

So why is he considered a competitive number two for endorsement? First and foremost, he’s the only candidate that has the ability to raise enough money to compete with the ginormous Franken campaign war chest. His campaign has $1.8 million cash-on-hand. Also, as a wealthy businessman, he has the ability to lend his campaign cash infusions.

And the delegates, whom McFadden has courted, may see him as a candidate who, once he’s head-to-head with Franken, will have the same focus and intensity as Norm Coleman, who narrowly lost to Franken in 2008.

In other words, it’s not personal, it’s just business.

Rising above family feuds is harder to do in the endorsement for governor.

Marty Seifert, who lost the GOP endorsement for governor in 2010 to Tom Emmer, is running again, this time not promising to abide by the endorsement. The Emmer-Seifert factions still exist among the delegates — as do Seifert fans who believe he would have beaten Dayton.

Complicating the decision for the delegates is the certainty of a primary with two strong candidates, businessman Scott Honour and State Rep. Kurt Zellers, who essentially have bypassed the endorsement process.

That leaves State Sen. Dave Thompson and Hennepin County Commissioner Jeff Johnson. They are hoping to scoop up the delegates conflicted about Seifert. This three-man contest is where hard decisions must be made.

Seifert has made a good showing in greater Minnesota and could be seen as offering voters a reasonable alternative to the metro-liberal Dayton. But he’s weaker in the suburbs with their cache of Republican voters.

Thompson’s from Republican-rich Lakeville. He appeals to the party’s influential Liberty wing. He’s an attorney and a good speaker who can match Dayton’s intellect. But his days as a radio talk show host offer ample fodder for Democrats who are drooling at the chance to remind voters of Thompson’s flame-throwing past.

Johnson, from Plymouth, has equal appeal to the staunchly conservative yet pragmatic group of delegates that will determine the endorsement Saturday as the final act of the convention. His drawback is his poor showing in his only other statewide race, as a 2006 candidate for attorney general. His base is Hennepin County, a good place to attract independent voters but not a GOP stronghold.

Still, he may be seen as the one candidate with ability to unite the Liberty wing, the Tea Party activists, and the traditional pro-business Republican voters who have to be mobilized to give the GOP a chance. He bills himself as “the candidate who can win.”

Sixty percent of the Republican delegates may agree with him on Saturday.