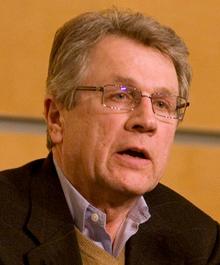 Another leader in the Minnesota Independence Party is gravitating toward support of a Republican statewide candidate.

Horner is already informally advising the Johnson campaign on policy issues.  The meeting could make his role official and bring some centrist credentials to the campaign.

“I’m not one to sit on the sidelines,” Horner said.

Why Johnson and why now?

“Johnson will listen to people, will look to a lot of different sources for policy advice,” Horner said.  “Most important, he’ll be open to new programs, new ideas instead of just sending checks.”

In his 2010 race for governor against Dayton and GOP candidate Tom Emmer, Horner got 12 percent of the vote.  Horner believes there’s a core Independence Party vote of five percent — a significant number, though not enough to upend a race where polls suggest that Dayton is holding a nine to ten point lead.

But there are other factors in play, Horner says. “There’s another 10 to 15 percent that moves with the Independence Party,” he said.   “This is a year that a lot of independent voters will look at the other two candidates.”

This means an opportunity for Johnson, Horner said. “He will have to go beyond some of the stereotypical Republican issues and solutions and show that he can speak to new ideas and new ways of addressing challenges,” he said.

Education, health care, and taxes are the three legs of both Johnson’s and Dayton’s campaigns.  Here is Horner’s take on those issues.

On education: “A good case is all day kindergarten. Of course it’s a fine idea but if you’re going to spend $135 million to get kids ready, to get ready for jobs, where is the most valuable return on our money? I think Jeff Johnson is much more likely to [ask that question] rather than Mark Dayton.”

On taxes: “I wasn’t opposed to raising more revenue, but the way the governor went about it is not in the best long-term interest of Minnesota. Just adding fourth tier only reinforces a tax system that isn’t suited to a global market. Maybe we need more revenue but tilt the policy much more to tax consumption and more to reward investment.”

On health care: “MnSure is where Republicans could play an effective role. It’s good that we’re expanding access and covering children and have a more robust marketplace.  Now how do we control the underlying drivers of health care?”

In 2010, Horner’s candidacy drew the support of such Republican luminaries as former governors Arne Carlson and Al Quie, and a slate of prominent former GOP legislators who refused to back the party’s endorsee, Tom Emmer.  The group was branded “quislings” by then GOP party chair Tony Sutton.

Now, Horner has emerged as a power broker of the middle, and his endorsement could bring those same Republicans into the Johnson tent, where they would be welcomed with open arms.

Horner won’t predict the likelihood of that happening, but said of his meeting with Johnson, “Our conversation … is going to say what happens next.”