Only if you’re surprised that those who spent heavily in 2010 to support then-gubernatorial candidate Tom Emmer are now doling out a lot less money to support a far less controversial, more traditional pro-business candidate.

Conspicuously absent from the 2014 race, for example, is MNForward, a political action group primarily funded by Minnesota’s large businesses. In 2010, the group spent almost $2 million to support Emmer’s candidacy. Yet as of mid-September, MNForward had spent nothing on the Johnson-Dayton race — and is not expected to.

Credit the business groups’ reticence to the power of incumbency — and to Dayton’s somewhat surprisingly healthy relationship with local business leaders. Indeed, many business groups and their individual members have spent considerable time in Dayton’s office over the last four years.

They’ve lobbied him on dozens of business concerns, and persuaded him to drop his business-to-business tax proposal and to support streamlining the state’s regulatory process. More directly, individual businesses worked with the governor’s office on the authorization of a new Vikings stadium and the state’s successful bid for the Super Bowl.

As a result, compared to most of the special interest groups that have traditionally opposed Dayton and the DFL, the business community has a downright cordial relationship with the governor and his administration. Of course, it doesn’t hurt that Dayton’s incumbency has given him clear front-runner status.

All of which is not to say there’s no independent, pro-Johnson paid support of substance. The Minnesota Action Network, the PAC headed by former Minnesota U.S. Senator Norm Coleman, spent roughly $400,000 on ads attacking Dayton’s record on education reform.

And starting in early September, the Freedom Club has spent almost a million dollars on an ad criticizing Dayton and the DFL about the new state Senate Office Building.

There’s also the Pro Jobs Majority, the PAC arm of the Minnesota Chamber of Commerce that was sitting on almost $700,000 as of mid-September. It’s expected that some of that money will find its way into pro-Johnson, anti-Dayton advertising. 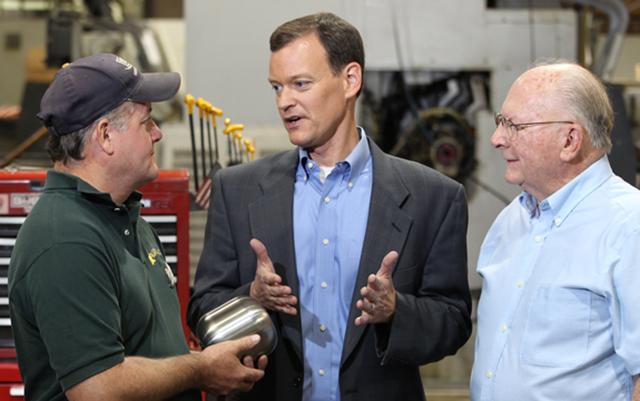 Johnson for Governor
Those who spent heavily in 2010 to support then-gubernatorial candidate Tom Emmer are now doling out a lot less money to support Jeff Johnson.

The 2014 governor’s race has not produced a torrent of spending on either side. Even amid that context, though, business groups are being substantially outspent. Alliance for a Better Minnesota, the DFL powerhouse PAC, has already spent almost two million dollars in the governor’s race, and the Minnesota DFL Party has spent about one million dollars.

While campaign spending on both sides will no doubt increase over the next 10 days, it’s unlikely that donors on either side will come forward with six-figure contributions that could change the campaign spending patterns already in place.