For the third consecutive election cycle, Minnesota Republicans are lamenting the absence of a political action group to rival the well-financed, DFL-aligned outside group Alliance for a Better Minnesota.

They may be try to plug that gap with the Minnesota Jobs Coalition, an organization that helped put Republicans in the majority in the Minnesota House — and that is now trying to put itself forward as the natural GOP counterweight to ABM. But the question still remains whether any GOP-aligned outside group can create and maintain coalitions with the efficiency and effectiveness of its progressive counterpart.

“I think the Minnesota Jobs Coalition is well positioned to be the lead the group on the right,” said founder Ben Golnik. “I believe more strongly than ever now, we need a year round group to hold the Democrats accountable.”

Golnik and his team of video trackers, who’d been following Gov. Mark Dayton during the 2014 legislative session, switched to individual legislators this summer. They hit DFL legislative candidates hard and fast, unfettered by a concern of working with legislators in the upcoming session.

Trackers followed DFL legislators Shannon Savick and Andrew Falk, catching Savick incorrectly denying she had voted for a new Senate office building and Falk appearing to run away from a question on his vote for MNsure.

Savick and Falk lost their races, as did DFL state representative John Ward, against whom the Minnesota Jobs Coaltion ran radio ads.

Groups like the Leadership Fund and Pro-Jobs Majority, affiliated with the Minnesota Chamber of Commerce, also weighed in on targeted legislative races, but stayed out of the governor’s race.

“The business groups—the problem is that they are going to they have to lobby the same legislators they are running ads against,” Golnik said.  No one affiliated with the Jobs Coalition is a registered lobbyist. 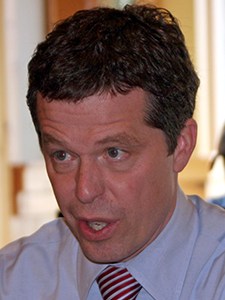 And did it ever. Of the $4.8 million that ABM had amassed as of the end of the October, more than two million dollars was spent to define Johnson as a Tea Party Republican who would roll back progress and reform.

And of the $4.8 million, $3 million came from the WIN Political Action Fund, which got the bulk of its contributions from the political arms of unions like Education Minnesota, AFSCME, IBEW, MAPE, and the Nurses Association.

Thompson, who has authored anti-union legislation, believes that conservatives can’t replicate the ABM model. “Here the DFL has a cash machine – the unions and union dues,” he said.

But the assumption that ABM held and will continue to hold a huge funding advantage is “a self-fulfilling prophecy,” said Pat Shortridge, former chair of the Minnesota Republican party.  “We were sending Mike [McFadden, GOP U.S. Senate candidate] and Jeff out there without any cover. We can’t wait for some national group to come along to bail us out.”

Golnik couldn’t agree more.  He said the Jobs Coalition is preparing a detailed post-mortem that will go to like-minded groups and individuals.  “We made a lot of progress,” he said. “We now have to track this to show to donors and others We have the best return on investment on the center right.”

Hey, big spender: how Minnesota Republicans want to be just like Minnesota Democrats