Appearances at plant openings and business expansions are a routine obligation of being governor. Few are memorable.

But when I read the news this weekend that Fairmont Foods in Fairmont would be closing its operations in March, I remembered every detail of my visit there with Gov. Arne Carlson more than two decades ago. After all, Fairmont Foods is where I met Paul McCartney.

In 1993, Fairmont Foods was chosen to produce a line of frozen vegetarian foods created by Paul’s wife, Linda, who would die of breast cancer in 1998. Arne was asked to preside over the ribbon cutting ceremony, which would also include both Paul and Linda.

I was the governor’s communications director at the time, and neither I nor his wife Susan would usually accompany the governor on this kind of state business. But Susan and I are baby boomers of the first order, and a one-on-one with a Beatle was not business as usual. The governor made room for us.

When we arrived at the Fairmont offices, Arne and Susan were taken aside for a private meeting with Paul and Linda. I hovered in the background, grateful for the brief glimpse I had of Paul: so tall, so English, still cute.

Just before the ribbon cutting was to begin, Paul went into a private room for some grooming. The door was left ajar and, yes, I admit it, I peeked in as an assistant touched up his makeup and hair. 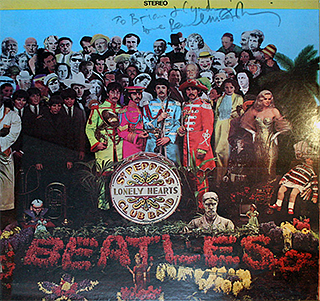 I didn’t expect to get any closer to Paul, but I just happened to be at the door of the room where he was getting his touch up when he exited. I stammered and smiled. He smiled back. And then I produced my secret weapon.

Just before I had left that morning, my husband, who fancies himself the state’s foremost authority on the Beatles (or at least their biggest fan), handed me the iconic cover of the Beatles’ album, “Sgt. Pepper’s Lonely Hearts Club Band.” Take it, he said, and ask him to sign it.

So there, standing the offices of Fairmont Foods, I made a request I’m sure Paul has heard thousands of times before.

I don’t remember much more about the visit. I know Linda McCartney’s line of frozen foods stopped production a few years later.  And my heart goes out to the people who will lose their jobs when Fairmont Foods closes in March. But I certainly have a lasting and beloved memory of the place, one sits on my mantle: an album cover that reads, “To Brian and Cyndy. Love, Paul McCartney.”