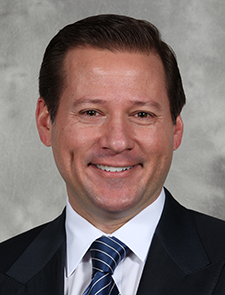 The Freedom Club, a powerful group of conservative activists, is losing its president. Brandon Sawalich is leaving his leadership post and the group’s executive committee to focus on his family and his job as senior vice president of Starkey Hearing Technologies.

The Freedom Club was founded in the mid-90s by Bob Cummins, the CEO and President of the Plymouth-based Primera Technology, whose passion for conservatism is matched only by his passion for privacy.

When Sawalich took over as president in 2011, the club and its members became more transparent, in part because Sawalich, 39, appreciated and used social media to advance the club’s causes.

In that spirit, Sawalich agreed to an interview with MinnPost to talk about his tenure at the Freedom Club.

MinnPost: What was your goal when you became the Freedom Club president?

Brandon Sawalich: I wanted our goals to be clear and simple: grow the membership by 20 percent; increase member engagement on our strategies; get Republicans who represented our groups values elected. I’m proud of what we achieved over the last four years — our membership is at an all time high, our meetings are vibrant and at room capacity. We have played key roles in winning select elections the last two election cycles.

MP: The Freedom Club says it’s “dedicated to the cause of freedom.”  What does that mean?

Sawalich: It’s meant to be a broad statement. Our main area of focus is economic freedom. I don’t think it’s much of a secret plan; it is what members of our club are passionate about having a voice on — less government involvement and less taxes. Minnesota is rich in history of successful Fortune 500 companies all the way to small independent businesses. We believe business owners can make better decisions on their businesses with less government involvement and fewer taxes.

MP: Can liberals be dedicated to the cause of freedom as well as conservatives?

Sawalich: Absolutely. We are all proud Americans, proud Minnesotans who believe in freedom and exercise our liberties by joining clubs, political parties or remaining independent, to choose how best to voice what’s important. America was founded on freedom and political opinions are what drive us to make America the greatest nation in the world.

MP: The Freedom Club was seen as a secretive, exclusive group. But now it’s much more visible, mainly through social media.  Is that because of you?

BS: One of my goals with the Freedom Club executive committee was to be more visible to the public. We wanted to get out of being “behind the curtain.” We have invested resources and time into social media, traditional media and a website for more visibility on who we are. It takes a team to accomplish this goal and we wanted to walk before we run. We have made progress.

MP: What don’t people understand about the Freedom Club?

Sawalich: To some people’s disappointment, there is no secret handshake or password at the Freedom Club. We’re a smaller club of Minnesota business leaders who support campaigns and causes each election cycle. As I mentioned previously, we haven’t always been public in our opinions. When you choose to say “no comment” people will fill in the blanks with their perception and talk track. I always say if they’re talking about you — you must be doing something right. Our members are likable, dedicated, service-minded people.

MP: The Freedom Club took some heat when it sponsored gubernatorial and U.S. Senate debates but closed the doors to non-members, including media. What was the reason for that?

Sawalich: Our debates were held during our monthly Freedom Club meeting. It was organized for our members and all our monthly meetings and dinners are private member only meetings. The Freedom Club had been consistent on this policy even before I was a member — its part of the value of being a member.

Sawalich: The executive committee will again have the opportunity to decide if this is a policy worth changing.

MP: Freedom club wants to elect conservative/Republican candidates.  How does the Freedom Club help that cause aside from money?

Sawalich: We all know money is a factor in all elections, whether you’re Republican or Democrat. We have a fundraising budget we hit every year to support selected elections. Many members of the club engage in other candidate activities either as a group or an individual. We support grassroots efforts as well. Our members make phone calls, knock on doors and participate in focus groups.

MP: There’s been a push among Republicans to coordinate their election year efforts, along the lines of Alliance for a Better Minnesota.  But you’ve indicated the Freedom Club prefers to remain an independent voice.  Why is that?

Sawalich: We do focus our resources on strategies on what we believe in. The Freedom Club supports other Minnesota conservative groups and meets with its leaders. I do believe we can accomplish more by working together than alone. If we’re going to win elections we need to collaborate as a team. I feel over the last couple years, we’ve done a good job collaborating with other groups as our values align.

MP: You were finance chair for the Minnesota Republican Party and resigned that post last year.  Now you are leaving as president of the Freedom Club.  Does this indicate a fatigue or frustration with politics?

Sawalich: No, not at all. I committed to Chairman [Keith] Downey one year as the Finance Chairman to support the MNGOP efforts and help get the party headed in the right direction financially. We did well in one year and they continue to build. I’ve served two terms as President of the Freedom Club. I wanted to give someone else an opportunity to come in with new energy and ideas.

MP: What’s your next likely step in political involvement?

Sawalich: I will continue to focus on my family and job at Starkey Hearing Technologies. I will let the game come to me and see what arises. I’m not out actively looking for a next move.