It was, at a minimum, a contrast of speaking styles as Democratic presidential candidates Hillary Clinton and Lincoln Chafee addressed members of the Democratic National Committee today at the Hilton Hotel in Minneapolis.

It was also a vivid display of the power Clinton holds among the 300 activists and about 100 members of the public who cheered and chanted at the very mention of her name during the pro forma program description.

Clinton called for action on women’s rights, racial equality, climate change and gun control, touching each subject with passion and without specifics. The crowd ate it up, interrupting her speech so often that Clinton almost doubled the 15-minute time limit that DNC chair Debbie Wasserman Schultz promised would be strictly enforced.

Clinton’s themes were broad, inspirational, and deferential to one Democratic president in particular.

“In America, if you work hard and do your part you should be able to get ahead and stay ahead.  That’s the bargain that makes this country great,” she said.  “When my husband [Bill Clinton] put people first he made that bargain mean something.  For the first time in decades we all grew together.”

She skewered the field of Republican presidential candidates with humor.

She promised “to elect Democrats up and down the ticket,” acknowledging later in a news conference that she is playing the numbers game to secure the nomination. 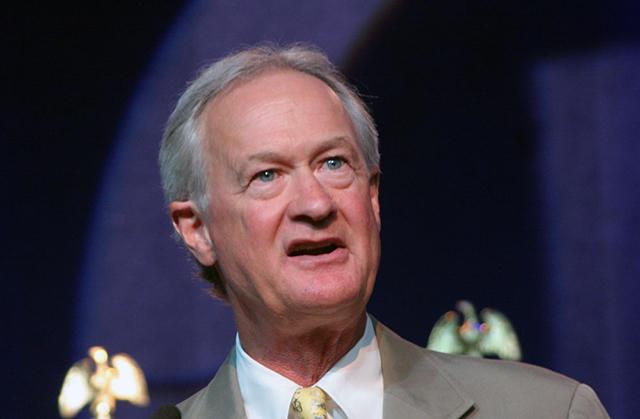 MinnPost photo by Brian Halliday
Lincoln Chafee preceded Clinton with remarks that were more a recapitulation of his résumé than a campaign speech.

Lincoln Chafee, the former Rhode Island governor, former mayor, former U.S. senator, and former Republican, preceded Clinton with remarks that were more a recapitulation of his résumé than a campaign speech. And while he was applauded politely, there were a smattering of boos when he told the group, “In all these years of service I’ve had no scandals.”

In his comments at a news conference, Chafee said he meant no reference to Clinton and the controversy surrounding her use of private email account while she was secretary of state.

But he did take a swipe at that record. “We differ on the approach to the world,” he said. “A little belligerent, a little too close to that unilateral approach to the globe that causes so much trouble, that I personally disagree with vehemently.”

Clinton did not acknowledge Chafee or any of the other candidates, even when asked specifically about Vice President Joe Biden, who is said to be considering a run.

She left the Hilton Hotel immediately after talking to the new media, headed for a fundraiser. Her closest rival at the moment, Vermont Sen. Bernie Sanders, and former Maryland Gov. Martin O’Malley will address the DNC this afternoon.

Clinton rouses activists, Chafee not so much at DNC event