The members of the Democratic National Committee meeting at the Hilton Hotel in Minneapolis were thoroughly engaged by presidential candidate Hillary Clinton’s speech on Friday. But they were inflamed by the speeches that followed as candidates Martin O’Malley and Sen. Bernie Sanders pushed the party’s progressive agenda leftward.

O’Malley called for an expansion of Social Security, raising the minimum wage to $15 an hour, and a stronger defense of unionization — remarks that brought the crowd to its feet more than once.

And while the former Maryland governor took the obligatory club to the Republican party — “Let their party be led by a hate-spewing carnival barker” — O’Malley didn’t spare the very people he was appealing to. He was blunt in his criticism of the DNC decision to sanction only six debates.

“This is totally unprecedented in our party. This sort of rigged process has never been attempted before,” he said. “Whose decree is it? Where did it come from? To what end? For what purpose? What national or party interest does this decree serve? How does this help us tell the story of the last eight years of Democratic progress?”

O’Malley left the stage to a standing ovation and more applause than greeted him at the start of his remarks.

The applause became ear-pounding noise with the arrival of Vermont Sen. Bernie Sanders — who, far from criticizing the 300 DNC members, praised them. “What you are doing is the most patriotic thing we can do as Americans,” he said.

Then he let the rhetoric rip. Some excerpts:

“What we need is a political movement that is prepared to take on the billionaire class that will work for all of us, not just a handful of the wealthiest people in this country.”

“Let me be as clear as I can be. Democrats will not retain the White House, will not regain the House and Senate, will not be successful in dozens of races unless we … produce a huge voter turnout. That turnout will not happen with politics as usual. … We need a movement which tells corporate America and the wealthiest people in this country that they will start paying their fair share of taxes.”

Sanders’ positions were not so much a poke at Hillary Clinton as a magnification of similar policies she has offered. She wants to overturn Citizens United, the Supreme Court decision that allows corporate and union money to flow unfettered to political campaigns. He says he wouldn’t appoint a Supreme Court justice who doesn’t pledge to rehear and overturn the ruling. 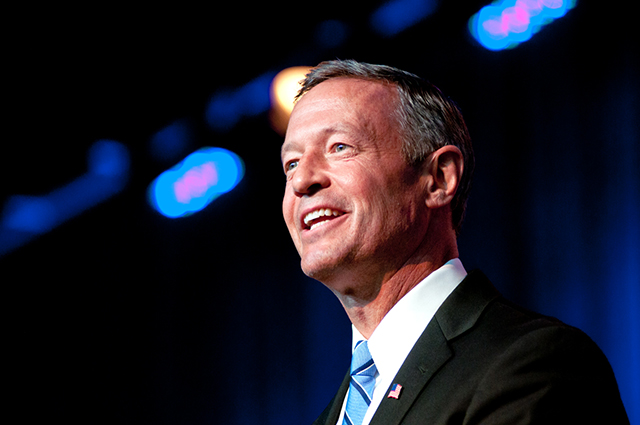 MinnPost photo by Bill Kelley
Martin O’Malley called for an expansion of Social Security, raising the minimum wage to $15 an hour, and a stronger defense of unionization.

Clinton has a plan to help students with college loan debt. Sanders wants free tuition at every American college and university.

Sanders admitted that his policies initially put his campaign for presidency in a long-shot position.

“The word fringe was heard more than once,” he said.  “A lot has changed in the last few months.”

So much has changed that while DNC members appeared to give Hillary Clinton an edge in their applause and appreciation, Sanders is holding on to the loyalty of the party’s more liberal members.

Sanders takes on the establishment; O’Malley criticizes GOP (and DNC over debates)