Republican presidential candidate Sen. Rand Paul recently released a list of endorsements from state leaders, including those in Minnesota, many who used the word liberty or its synonyms to explain their support.

“He believes in a country where our personal freedoms and liberty are paramount,” said Nevada Assemblyman John Moore.

“I believe Rand Paul, among all the candidates, understands and will resolutely defend Religious Liberty,” said State Rep. Anderegg of Utah.

“Sen. Paul’s priority is freeing citizens and putting the people back in charge of their lives,” said Minnesota state Sen. Roger Chamberlain.

Clearly, liberty and libertarian are a favorite term for Republicans. In Minnesota, there’s even a Republican Liberty Caucus, chaired by Neil Lynch, who also has endorsed Paul. And the party has a component of self-described libertarian Republicans like former state Sen. Branden Petersen (another Paul endorser) and party activist Bill Jungbauer. The Liberty Minnesota political action committee states that its goal is to empower “liberty-minded voters.”

MinnPost: Who are the members of the Libertarian Party of Minnesota?
S.L. Malleck: I think it’s safe to say we are the third largest political party in the state. Our fundraising has more than quintupled from five years ago, although we are small in that effort compared to what the Ds [DFL] and Rs [Republican] do. [LPN reported raising $42,800 in 2014.] The number of people who follow our Facebook page is the third largest in Minnesota. We are at about 200 dues-paying members. Five years ago we had about 35.

MP: What are the party’s strengths?
SM: I think our main strength is our comprehensive principle of supporting liberty on all issues all of the time. When I was staffing our booth at the State Fair, I was able to say that Libertarians believe people should be able to live their lives as they choose, and spend their money as they choose, as they as long as they don’t impinge on another person’s right. And there’s no other party that can express their philosophy that simply.

MP: Is it really that simple?
SM: Yes, we support all civil liberties. Unlike other people that try to pick which ones they like and which ones they don’t, we support all. We strongly support a free and open marketplace. We strongly support the right to self-defense. We are strong supporters of the First, Second and Fourth Amendments. We’re opposed to foreign interventionism in war.

MP: I noticed you didn’t mention abortion rights …
SM: Abortion is one of the few issues I can’t give you a good response on because both sides the argument can be made form the libertarian perspective: life should be protected or a woman has a right to do what she wants with her body. Libertarians are split on this issue, so our stance is just keep the government out of it and let individuals make their own decisions as to what their consciences allow.

MP: Given the party’s small size, how can it influence elections?
SM: We are already influencing elections. We have five elected Libertarians in Minnesota, a Pine City school board member and four City Council members in St. Peter and Crystal. These are local offices. These are races we can definitely compete in. To get to the next level to have success in partisan races, we need to be included in debates. In the public’s eyes, debate inclusion is seen as legitimacy. 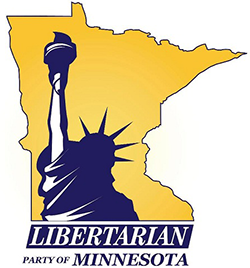 MP: Rand Paul brands himself a libertarian and his Republican supporters use the word a lot. What do you think of the use of the term liberty as a political message?
SM: Rand Paul is libertarian leaning on certain issues, for example: surveillance. But he supports continuing the drug war. Conservatives tend to talk about freedom, but what they do is just the opposite. Bush [Pres. George W.] promoted TARP [the 2008 government program that purchased assets from banks to strengthen the financial sector]. When big institutions get government support and little guy is paying for those efforts, that is not freedom.

MP: What is the difference between the Libertarian Party and the Independence Party?
SM: The Independence Party is a centrist party that moves in an authoritarian direction, supporting a government approach. We are centrist in a pro-liberty direction. Let me give you an example. We have the FDA, which regulates food as well as pharmaceutical drugs. But the market is capable of performing the regulatory function. A great example is Underwriters Laboratories – UL – a private, for-profit company. And UL has competitors. We believe we should rely more on entrepreneurs to do things that government is spending a lot of money on and not doing very well.

MP: How do you keep people engaged in the Libertarian Party movement?
SM: Unfortunately, we don’t have the large infrastructure that the Democrats and Republicans do. Their candidates dominate the headlines. We don’t have that. The way we keep people engaged is by taking active stances on issues. We took a strong stance opposing the marriage amendment and supporting gay marriage, and we built bridges to some people on the left.

MP: So do you attract party members from the left and the right?
SM: We have former DFL activists who have joined the Libertarian Party. And we have activists who used to be Republicans.