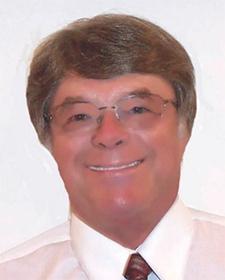 Roger Johnson of Coon Rapids received the provisional endorsement of the DFL leadership in Minnesota Senate District 35 to run for the seat vacated by Republican Branden Petersen. As the only declared DFL candidate for the seat, he likely will receive the DFL’s full endorsement next month.

But that’s where likelihood fades for Johnson, a retired college professor and a DFL activist. He will face a Republican opponent in a special election Feb. 9 in a district that represents Coon Rapids, Anoka, Ramsey and Andover — an area where Republicans have held Senate and House seats for decades.

“Is it an uphill battle? You bet,” Johnson said. “But it is a battle I’m willing to wage.”

If political pedigree is a weapon, Johnson is well armed. His father, who came from Sweden as a child, learned the trades of construction, carpentry and masonry, and became active in the organized labor movement.

The elder Johnson became friends with a couple of like-minded political activists named Hubert Humphrey and Art Naftalin. As Johnson tells the story, on April 15, 1944, his father, Humphrey, Naftalin, and a half dozen others met to create a new party, forging an alliance among Democrats, farmers, and labor advocates: the DFL.

“The strength of the labor movement in American is ingrained in my very being,” he wrote in a letter to the DFL endorsing committee. “My father was there at the formulation of the DFL Party in Minnesota when I was just a pre-school child.”

Education, then and now, shapes Johnson’s political priorities. “My father was always very supportive of schools, that I might become something someday that he only longed to be,” he said. “Schools are very important to me. Just about everything I do is to find opportunities for young people.”

Specifically, Johnson is concerned about funding for the Anoka-Hennepin School District. “They’re considering cutting seven to eight million dollars out of their budget next year because the legislature has been unable to provide sufficient funds,” he said.

Johnson believes that as a Democrat, he would have more input than the district’s GOP representation in shaping education policy. Funding, he says, is the most serious but certainly not the only problem for Anoka-Hennepin schools.

“We have too many mandates without money. We’ve got an immigration population that’s growing and we need to make sure they have the wherewithal to succeed. Every child that we have in this school district needs that same attention,” he said, adding that education policy must address “the fact that demographically we are losing workers, we are a graying state.”

Johnson doesn’t know yet who his GOP opponent will be. Four candidates — Andy Aplikowski, Jim Abeler, Don Huizenga, and Reid Oines — are competing for the Republican endorsement, which will be decided on Nov. 14, with the likelihood of a primary face-off in January.

Johnson acknowledges that the number of Republican candidates is indicative of the conservative strength of the district. But he also contends the DFL should have a role to play.

“It’s amazing how many union members live in this district, yet they vote on the conservative side,” he said. “They’re convinced that Democrats are going to take away their gun rights, their snowmobile trails, but when it comes to Roger Johnson, they don’t have a lot to fear.”

A Coon Rapids resident for 41 years, Johnson has tried and failed to receive the DFL endorsement in two past elections. With the near certainty of an endorsement now, he said he’s “willing to shake the tree one more time” in an area where Republican preference is as sturdy as an oak.