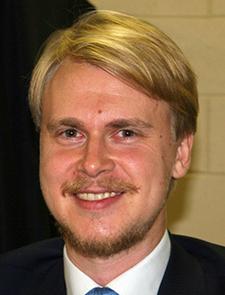 David Benson-Staebler, Republican candidate for John Kline’s seat in the Second Congressional District, has already made quite an impression among the activists and obsessives paying attention to the race at this early stage — largely due to the candidate’s comments in an introductory news release and on social media.

Among other things, in a news release distributed at the first Republican candidate debate, Benson-Staebler called Black Lives Matter “a ruinous movement which… has done tremendous damage to African-American and its own communities.”

Then there was this: “For the good many, I would seriously consider punitive punishments against anyone violating the law out of a bigotry against my being Caucasian, male, and heterosexual as prejudice.”

In an email follow up to my questions, he wrote: “BLM has been based on lies and bigotry from the beginning and was fostered as a prep-for-get-out-the-vote for Democrats from the beginning … As reflects the style of President Obama-era DNC tactics, the movement does not seek racial equality and perverts the teaching of Martin Luther King Jr.”

Benson-Staebler has echoed those remarks with similar posts on Twitter. Such extreme comments — coupled with Benson-Staebler’s previous work as an operative for Democratic candidates in Virginia and New York — have actually prompted suspicions that he is not a Republican candidate at all, but a mischief-maker solely in the race to offer inflammatory rhetoric that will taint the entire Republican field.

At least two other candidates’ campaigns have referenced the issue, albeit indirectly. Andy Parrish, a consultant for state representative Pam Myhra, one of the other four GOP candidates competing to replace Kline, said: “While some people might seem to polarize and divide the party, Pam Myhra has a record of uniting people from all across the spectrum and all walks of life.”

Noah Rouen, a spokesman for the race’s most high-profile candidate, former radio host Jason Lewis, offered: “Jason’s campaign is focused on bringing people together. With a $20 trillion national debt and growing crisis abroad, Minnesota’s second congressional district needs someone who understands the issues and has real solutions to the serious problems facing our district and nation.”

Benson-Staebler, 29, said division is not the purpose of his condemnation of Black Lives Matter, even as he proceded to go further with an explanation of his views.

“The biggest hate problem of today is African-Americans against Caucasians,” he said. “Just look at when someone said they were going to shoot white kids on the University of Chicago campus.”

If his Republican competitors question Staebler-Benson’s positions, he is not surprised. “I understand if different generations don’t see it the way I do,” he said.

Benson-Staebler’s positions on the economy, Social Security, and terrorism — as he expressed them at the debate two weeks ago  — are similar to those of GOP competitors Lewis, Myhra, John Howe and David Gerson.

But his views shift toward the libertarian on social issues. “I know people in Minneapolis who are same sex and married and they’ve been together for decades.  The idea of them not having the access and the treatment that’s necessary for their union would be wrong,” he said.  He added he does not endorse the U.S. Supreme Court ruling on the issue.  “It seemed to be that the court was making a law, which is not the court’s job,” he said.

On abortion he says, “With the degree that I am pro-life, I begin with fewer abortions, fewer later abortions and more support for motherhood and parenthood.”

Benson-Staebler said his political change of heart evolved over time, starting from his days as a philosophy major at St. Olaf College. He currently lives in Morris, about 200 miles away from the Second Congressional District, adding another question mark about his candidacy. He says he is planning to move into the district shortly.

As for his view on race, equality, and Black Lives matter, he says, “I am ready to defend them.”