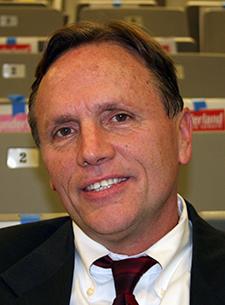 Jim Abeler had to fight for the Republican nomination for the state Senate, but he breezed to victory in Tuesday’s special election for a seat representing the Twin Cities’ northern suburbs.

Abeler won the right to face Johnson after beating GOP endorsee Andy Aplikowski in a primary last month. The seat was vacated by the retirement of Branden Petersen, who — like Abeler — is a popular Republican with an independent streak.

Abeler, a chiropracter, will take up his duties representing Anoka, Andover, Coon Rapids, and Ramsey when the legislature convenes on March 8. He says he wants to return to the role he played while serving as a member of the Minnesota House: a Republican who worked with Democrats.

“You may recall there were many times I was the only Republican conferee on health care and human services bills,” he said. Being in the minority, he added, will not change his effectiveness. “Being in majority means you get to set the agenda but it doesn’t mean that [Republicans] cannot have influence on the outcome.”

Human services, health care and transportation will remain the focus of his legislative efforts, he said.

In 2008, Abeler was one of a handful of Republicans to override then Gov. Pawlenty’s veto of a transportation bill that contained a gas tax increase. But Abeler suggested that this session, he would take a different approach. “I understand gas taxes were popular in 2008 but they are not popular in 2016,” he said.  “Because of the surplus, the general fund should become part of the solution. I think there is warmth in the legislature for this kind of solution.”