From my first experience with a Minnesota caucus, working for the re-election of Gov. Arne Carlson, I became convinced that the caucus system, far from encouraging democracy, manipulated politics.

It was a hidden process that encouraged the extreme wings of political parties to use an election to advance narrow political agendas. In the case of Carlson, in 1994, the extreme right wing of the Republican Party gamed the delegate selection to deny a popular sitting governor the endorsement of his own party.

At the Senate District 49 caucuses at Southview Middle School in Edina, probably because of the sheer number of people who wanted to vote in the Republican presidential preference ballot, there was no stacked deck.

They were there to vote for Marco Rubio, Ted Cruz, Donald Trump or John Kasich. And they explained why, with logic, enthusiasm and emotion. Every comment drew a response of polite applause.

“This is not a spur-of-the-moment thing,” said a Donald Trump supporter, who noted Trump’s longtime interest in politics and added, “All of the candidates have said things they are not proud of.”

A woman spoke, almost fiercely, about why she was voting for Ted Cruz. “He will do what he says he is going to do,” she said. “Think about that when you cast your vote.”

“Marco Rubio is the only candidate who will work for the next generations of conservatives,” said a Rubio supporter.

“Kasich is a thinker. He would be a rational person in the White House,” said one man.

Another Kasich supporter echoed those thoughts, then broke down in sobs. “I have a son serving in the Middle East,” he said. “John Kasich is the only one who has the right attitude about our sacrifices. Would you want your son or daughter to serve with Ted Cruz or Marco Rubio as commander in chief?”

“I don’t know who I’d vote for if The Donald would be nominated,” said a Rubio voter.

“No matter what happens, I will be voting for the Republican candidate,” countered a Kasich supporter, who said the choice would be a lot easier if Mitt Romney were running again for president.

The crowd of 50 in Precinct 6 in Senate district 49 responded collectively with a wistful sigh. 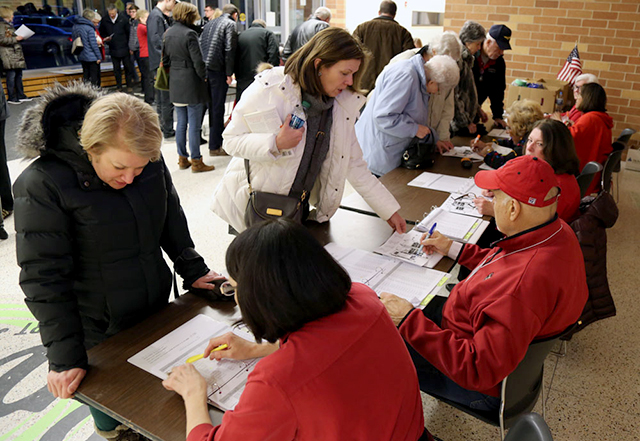 MinnPost photo by Brian Halliday
Republicans checking in at the Senate District 49 caucus in Edina on Tuesday night.

The speeches and the preference ballot took just over an hour, a commitment caucus supporters believe citizens should be willing to make. But it took an extraordinary turn in national politics to crack open the caucus system to produce this worthy example of American democracy.

This year was a one-off. In two years, when the parties meet again to nominate candidates for governor and Congress and interest flags, a primary is still the better way to get the nomination systems open to the broadest group of voters.

An open, inclusive and polite Minnesota caucus: This year was a one-off