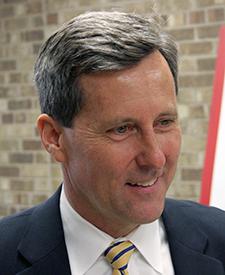 Keith Downey thought that Donald Trump had a “good night” compared to Hillary Clinton in a televised national security forum Wednesday night — hardly a surprising opinion from the chair of the Republican Party of Minnesota.

But at a round-table for foreign journalists that he attended last week with DFL party chair Ken Martin at the University of St. Thomas, Downey stepped into the void Trump leaves with his broad brush policy statements and deemed the GOP presidential candidate a “risk.”

“What if Trump wins and governs badly?” asked one of the reporters.

“So, I think it’s a huge risk,” Downey replied. “Do we really know where he is going to land on all of his policy provisions? There’s some open questions and that is part of the risk.” (You can listen here to the rest of the minute and half clip here.)

To be fair, it must be noted that Downey said he spent “a good 30 minutes” at the forum in defense of Trump. “There are things we don’t know about Donald Trump but we know a lot about Hillary Clinton and he’s one thousand times better than Hillary Clinton,” he said in an interview with MinnPost.

But Downey didn’t back away from his assessment that Trump is a gamble. “In the mind of some conservatives, Trump presents those risks,” he said. “Trump has not been elected. He’s new to party politics. There are some open questions about a Trump presidency.”

At the same time, the Trump movement — with its critique of globalization, concern for domestic terrorism, and its disdain for “political correctness” — is good for the party, Downey said. “It can be absorbed into the party just as other movements have been absorbed in the past.”

And Downey maintains that the state and national Republican parties can support Trump — even while having concerns about his actions in office. “Barack Obama had an imperial presidency,” said Downey. “He acted without the consent of Congress. Trump could try the same thing, but a Republican House and Senate would stop that.”

For a political party that’s suffered damage thanks to its presidential nominee, could the bizarre argument that the GOP needs Republicans in control of Congress to save the party from a Republican president give party loyalists a reason to hold on?

Downey seems to think so: “The party is 160 years old and one candidate cannot entirely undo that,” he said of the GOP’s endurance.

Minnesota GOP chair Downey: Yes, Trump is a gamble, but he’s still good for the party