Count Minnesota Majority President Dan McGrath as one of the doubters of Donald Trump’s claims that the presidential election is going to be rigged.

His skepticism is notable. Minnesota Majority, after all, is the conservative watchdog group that led the movement for a state constitutional amendment on voter I.D. and that aggressively seeks out cases of voter fraud.

But from his experience, which includes recruiting poll-watchers through Minnesota Majority and an umbrella organization, Election Integrity Watch, McGrath doubts that voter fraud could be a factor in the presidential election. “I think it would be difficult to sway an election with a big victory margin. If you’re talking 1 to 2 percent that could be more feasible, but it would take a lot of effort to orchestrate,” he said.

And orchestration is daunting, he said. “All elections are state business, so orchestrating a national campaign would have to be coordinated with states, each with their own elections laws.”

Voter fraud, according to McGrath, is usually conducted on small-scale campaigns – county, city and sheriff’s races. “That’s mostly where elected officials have been caught and prosecuted,” he said. 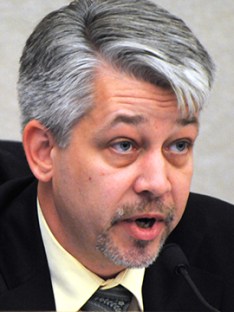 After the 2008 election in which Democrat Al Franken beat incumbent Republican U.S. Sen. Norm Coleman by 312 votes, Minnesota Majority undertook an investigation that focused on convicted felons who voted in the 2008 election. (Minnesota law allows felons to vote only after serving time and probation.)

In the years since, McGrath and his group worked with lawmakers, and most recently DFL Secretary of State Steve Simon, “to make it as difficult as possible to cheat” in the polling booth.

His biggest victory in that arena was a court ruling that overturned the online voter registration system established by former Secretary of State Mark Ritchie. And during the last legislative session, McGrath says he worked with Simon on another election fraud measure, helping pass a law that limits the number of people for whom someone can vouch from 15 to seven and requiring those vouchers to register not just with a signature but a printed name.