In the four-way DFL primary to succeed Rep. Rick Nolan in Minnesota’s 8th Congressional District, it comes down to miles and money.

Former state Rep. Joe Radinovich, Nolan’s former campaign manager, acknowledged as much as he kicked off a regional tour at Clyde Iron Works, a repurposed industrial crane factory in the heart of Duluth’s once-thriving west end.

“I’m going to do this by wearing out my shoe leather, like I always have,” Radinovich told a group of about 40. “When I was in the Legislature, I knocked on more doors than any other Democrat.”

Radinovich also recognized the need for fundraising. “The real challenge that we have is that we have enough money, that we spend it in the right places,” he said in an interview.

Radinovich was speaking for himself, of course, but he could have been speaking for his three challengers as well: state Rep. Jason Metsa, former news anchor Michelle Lee, and North Branch mayor Kirsten Kennedy.

To have a chance in the 8th District’s DFL primary, the four will need to reach out to the estimated 55,000 to 70,000 primary voters, stretched across the 8th District’s 27,000 square miles — an area larger than 10 U.S. states and the Republic of Ireland — from International Falls to North Branch.  All four need money — as much as a $500,000 — to do that with any effectiveness.

The matter of miles and money forced Leah Phifer, a former FBI employee and the frontrunner at the April 14 DFL endorsing convention, to abandon plans to go on to the Aug.  14 primary. “You need to be on the road seven days a week,” she said. “I think it’s incredibly important that a candidate puts in the time, and that can be difficult.”

For her endorsement campaign, Phifer raised $90,000, a fraction of what she knew she needed to continue for “another long four months.” To get to the half-million-dollar budget, she said, “You are going to rely on outside money – outside the district.” 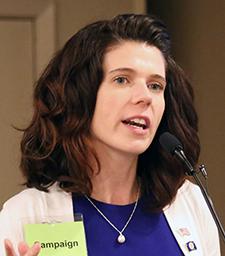 Phifer didn’t have the taste for that, and DFL 8th District chair Emily Nygren can understand why. “It’s a really tough thing, fundraising for a primary.  I don’t think it’s ever a big surprise whenever somebody drops out.”

Also daunting for candidates is the development of a voter contact operation that needs to cover and unite the district’s 18 counties. Nygren said that out of necessity, candidates running district-wide often hire professional get-out-the-vote operatives. But a successful candidate will “build a base of operations of friends, neighbors, influencers, people who are trusted,” she said.

Despite the geographic sprawl, “We are very, very connected up here. People look for ways to get together.”

Meanwhile, throughout the months of spring and summer campaigning, the candidates must keep their eyes on the greater prize: winning the general election against Republican Pete Stauber — in a district that went for Donald Trump by more than 15 points in 2016.

Phifer, for one, believes that “for the DFL to hold this seat is going to be difficult.” And even Radinovich told a Duluth group that, “Activation in opposition to Trump is growing in other districts, but Trump is still popular in the 8th District.”

There’s also the prospect that the DFL field could be further shaken up by another candidate joining the race before the June 4 filing deadline. “There’s always the possibility with a competitive primary when there is not yet a person rising to the top,” Nygren said.

The upside, candidates and party officials agree, is that a competitive primary will result in a battle-proven DFL nominee, one that has mastered covering miles of campaign territory via media, surrogates, and in person, and raising enough money to do so.