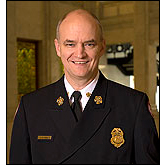 From behind his oversized mahogany desk in a corner office in City Hall, James Clack can look straight ahead at the portraits of the 14 people who have served before him as chief of the Minneapolis Fire Department, dating all the way back to 1868. Physically, he bears little resemblance to the first few chiefs—formal gents who sported handlebar mustaches and intense expressions. Clack, on the contrary, is clean-shaven and more on the casual side.

And he clearly isn’t impressed with the big desk, or the power it suggests. (“It’s too big; it’s ridiculous, really,” he joked.) Instead, he immediately points a visitor toward a cozy table in the corner overlooking the Government Plaza and shares his thoughts on getting a degree from the University of Minnesota, Crookston (UMC), on recently taking over the state’s largest fire department, and on some historic events along the way.

Clack, 47, has spent much of his life in the comfort of rural surroundings. He was born in Crookston and grew up on a 160-acre plum farm in Fowler, California. He moved to Minnesota for his senior year in high school and less than a year later had his first date with wife-to-be Rose Marie Wilson at the Park Rapids High School senior prom.

Rose headed to the U’s Twin Cities campus, and Clack decided to attend Crookston, in part because he was recruited to play basketball by coach Jim Sutherland. Back then the team played the regional community college circuit, traveling in two vans to towns like International Falls, Grand Rapids, and Devils Lake, North Dakota.

Clack graduated in 1980 with an associate’s degree in applied science in general business administration.

“I’m so proud of all the firefighters who responded to the bridge collapse and did such a great job,” Clack said. “It’s just an honor to be a chief of this department at this time.”

“I had a great time [at UMC], and I had some great roommates,” Clack said. “I remember Crookston as being really cold, too,” especially the walk after practice “from the old gym to the chow hall…. Your hair would freeze solid.”

With his business background, Clack harbored dreams of opening up a hardware store. But it was while working for the Army at Fort Snelling that his career aspirations changed. One evening, while sitting in the lobby of a health club in St. Louis Park waiting for his wife to emerge from the locker room, Clack picked up a recruitment brochure from the Minneapolis Fire Department.

“I was reading it more because I was bored, waiting for [Rose],” Clack recalled. But the brochure impressed him enough that he sent in the reply postcard, as did 2,800 other people. He survived a lottery that whittled the number to 800, then scored 39th best on the exam. That just left the interview, in which Clack—who still wasn’t sure he even wanted the job—wasn’t the slightest bit nervous.

And he thinks his degree from Crookston may have helped him get the job. “I was able to put that on my resume and use it in the interview, and I’ve got to believe that helped distance me from some of the other people they were interviewing.”

Assuming control in a time of need
Clack began as a firefighter in February 1986 and spent five years at Station 11 in southeast Minneapolis on the hazardous materials team. In 1992 he was promoted to captain—where he moved from station to station—and in 1998 he was appointed deputy chief of personnel. “That’s when I got down here to the office,” he said, “and I’ve been here ever since.”

In 2004 he became assistant chief, and this past March he was officially appointed chief after serving as acting chief for about a year.

Clack’s time in charge has been relatively peaceful, with one notable exception—the Interstate 35W bridge collapse on Aug. 1. He was in Elk River with his daughter when he received the call, and his first thought was, “Well, a piece of it fell off—a guardrail or something.” When he arrived at the scene 35 minutes later, he remembered “looking down there and thinking, ‘This doesn’t look real.’ It was like a movie set or something.”

For the first 24 hours, the Minneapolis Fire Department was the lead agency of the unified command team, making Clack the primary commander of the rescue effort. He said he was struck by how well people worked together, not just firefighters but also police, the sheriff’s department, the Red Cross and even citizens. “I think the outcome is a testament to that,” Clack said. “It’s a disaster that is going to be studied by Homeland Security to figure out what we did right.”

He pointed out that there were 110 vehicles and 190 people on the bridge at the time of the collapse, according to the NTSB (National Transportation Safety Board). “We rescued 50 people in an hour and a half (the people who were brought in for treatment), and that’s pretty impressive,” he said. “It makes me have a lot of confidence that we can handle just about everything.”

Clack feels he chose the best of careers for himself, but is quick to offer credit to everyone in the department.

“I’m so proud of all the firefighters who responded to the bridge collapse and did such a great job,” he said. “It’s just an honor to be a chief of this department at this time.”

Down the road, when Clack slides his chair away from the big desk one last time, he envisions a return to his rural roots. He and Rose have a lot near Woman Lake by Longville, Minnesota, and although he loves his job and the city of Minneapolis, he’ll be looking forward to the quiet of the north.

“I’m more of a rural guy; that’s why I live out in Zimmerman (about 45 minutes northwest of Minneapolis),” Clack said. “That’s where I feel at home—out in the country.”