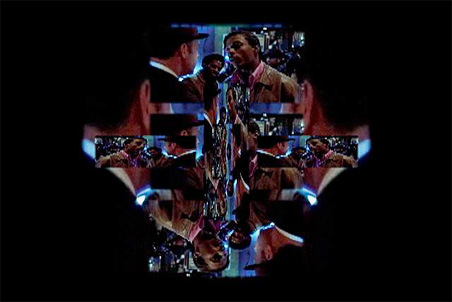 Mason Riddle offers a nuanced analysis of this provocative, multi-layered (and multimedia) exhibition by Rico Gatson, whose work challenges us to re-imagine race relations and our shared cultural histories.

IN A TIGHTLY CONCEIVED EXHIBITION comprising paintings, sculpture, drawings, and video, Brooklyn-based artist and former Franconia Sculpture Park artist-in-residence Rico Gatson presents a retinal-charged, stylish body of work whose sensual exterior acquires its gravitas from the issues of identity and racism, perception and reality that it explores. He takes a narrative approach, albeit idiosyncratic and oblique, to 20th century American—and African-American—history, one that interweaves a host of sources and events into a shifting landscape of ideas that is at once specific and general.

Gatson contextualizes this mash-up of ideas through the repeated use of representational and abstract images, including those of such touchstone luminaries as Black Panthers Huey Newton, Angela Davis, and Kathleen Cleaver, James Baldwin, Bobby Kennedy and Muhammad Ali. Integrated with these history-laden, activist figures are references to fractal geometry, African textiles, drumming and chanting, edgy ’60s film culture, psychedelia, the hard-edged abstract painting style of the era, and even Hurricane Katrina.

Gatson also investigates the power of symbols, such as the cross and the swastika, which carry inherently multiple meanings—denoting beauty, spirituality, or evil, depending on the context and historical moment. Collectively, the exhibition is a “gumbo of ideas,” a fluid soup of images and events that Gatson has snatched to create a narrative that is ultimately his own.

The artist’s high-keyed palette of red, orange, rust, blue, and gold, and his use of formal devices like stripe, pattern, and repetition all serve to lend the exhibition’s diverse elements a visual cohesiveness. Gatson refers to this practice as a mode of “branding,” but he uses the word metaphorically rather than as a reference to commodity or advertising schemes. More importantly, these highly controlled, formal strategies link the various works together on a cultural and historical level. From Gatson’s hard-edged, vibrantly-hued figure-ground paintings like Lower Ninth Mausoleum, to his more subtly rendered drawings that clearly convey the artist’s hand, or the bulky, rectangular box-like sculpture with exposed lightbulbs (Auction Block), the interplay between these varying pieces and media works well to serve the whole. His fast-paced, kaleidoscopic single channel video screens on eight monitors (titled Ali Bumbaye, the ‘Ali kill him’ chant), with rousing, carnival-like footage appropriated from the film of the legendary 1974 Ali-Foreman “Rumble in the Jungle” fight in Zaire; and his most recent video projection, System Failure , features graphic images of Emmett Till juxtaposed with those of the corrupt cop (Gene Hackman) from the 1971 film “The French Connection.” These film and video elements, too, serve Gatson’s overarching, exhibition-wide narrative.

Like his assemblage of media artifacts, Gatson’s saturated hues and formal language conflate a range of cultural notions and historical references. The vivid stripes recall not only hard-edged American painting but also African kente cloth. But Gatson does not restrict himself to the inherent meanings specific colors carry when used in traditional African textiles. Rather, his palette is completely fabricated. The illustrative image of Kathleen Cleaver speaking into a microphone, in one drawing, is transformed into vibrantly colored Russian icon on a gold ground in a flat latex on board paintings. The paintings Swastika #1, Swastika #2, Cross-Star and Othala Rune have a raised, bumpy surface, the texture of which is suggestive of the African cultural practice of scarification. In Auction Block, what, at first, looks like a colorful pedestal for performing circus animals is transformed into a chilling symbol of slavery.

Rather than offering a deconstruction of American history, the civil rights movement, or the rise of black power, Gatson has created a unique, individualistic approach of re-projecting and reformatting commonly held ideas and beliefs. He re-imagines them in a way that brings unexpected attention and new shades of understanding—and meaning—to aspects of African-American culture we thought we knew. Undoubtedly of its time, the work does address contemporary issues of spectacle and appropriation. But, more significantly, it explores Gatson’s ideas of identity, history, and racism on equal footing with his thoughts on what it means to be an artist and on the profound act of art making. This dialogue between creating meaning and creating objects, wearing the mantle of historic decoder and innovative artist is a “battle” Gatson acknowledges, but one that he embraces successfully and, surprisingly, without the use of text.

While Gatson seems to have deftly organized this plethora of elements and ideas into a manageable co-existence, one that seems to suggest hope and human progress, he leaves in place some complications. System Failure raises, again, the artist’s need for inquiry into identity and racism. After a barrage of kaleidoscopic images (Till, Hackman), jarring sound and intense flickering color, the three-minute video ends with a disembodied male voice uttering the confounding words: “Stay in the system… to do otherwise is to, in fact, bring down upon you, me, and every other recognizable black person a genocide… there are limitations.”

About the writer: Mason Riddle is a critic and writer on the arts, architecture, and design. She is the current president of the Visual Arts Critics Union of Minnesota.

What: Rico Gatson exhibition
Where: Minneapolis College of Art and Design, Minneapolis, MN
When: Show runs through February 17
Admission is FREE and open to the public

MN Artists.org: A Gumbo of Ideas: Rico Gatson at the MCAD Gallery