From slides to pixels, the U’s Visual Resources Center moves art history into the 21st century 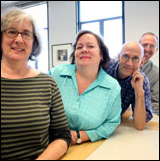 The staff members of the U’s Visual Resources Center (VRC) often make things up as they go along. Over the past decade, VRC director Rebecca Moss, assistant curators Ginny Larson and Denne Wesolowski, and photography expert Ashley Wilkes have transformed more than 50,000 of the Department of Art History’s approximately 300,000 slides into high-resolution digital images.

As visual resource professionals in a hot and relatively new field, they have devised a cataloguing system for art history images that is flexible, accurate, and accessible to even the most technologically inexperienced students and faculty members. Their work is contributing to a rapidly expanding Digital Content Library, which is one of the largest university collections in the country.

Wilkes was instrumental in the conversion from film-based photography to digital imaging. From his windowless office in the basement of Jones Hall, he researched emerging digital technologies, specifically the hardware and software necessary to capture, process, archive, and present images and video (in addition to slides, the VRC contains more than 200 films in a variety of formats).

With conversion processes in place, a new challenge arose: cataloguing the images for a broad range of users.

“This is very new and more complicated than classifying books,” says Moss, who came to the VRC from Indiana University eight years ago. “There is no national classification system as there is in library science. There are many more images than books. And whereas books come with titles, images come without any text. So we are cataloguing at a much greater depth. Given that there are many ways to catalog the same object, it’s a very subjective business.”

Part of the challenge, Larson says, is identifying just the right terms for classifying images. For instance, a popular painting like Edouard Manet’s Le Déjeuner sur l’herbe may be sought out by diverse groups of users. So it needs a broad range of “entry points” and keywords such as “Realism,” “nudes,” “modern life,” “gender,” and “canvas paintings.”

“It’s very different from working with slides,” says Moss. “We labeled them and they were done. There is only so much information you can put on a slide label. With digital technology, much more information can be included.”

After scanning an image, Larson and Moss create a work record, which contains information about the specific work (title, date, location, etc.); an agent record, which gives general information about the artist including birth and death dates; multiple views of the work from different angles; comments by experts in the field; and links to other relevant information. For instance, clicking on the “more info” button for the Jan Gossaert portrait A Little Girl will allow users of the database to learn that the girl is holding an armillary sphere, an instrument used to depict planetary movement. And that’s something that might be of interest to a historian of science. Moss and her VCR colleagues are also training graduate students to digitize and catalog images from 18 other College of Liberal Arts disciplines.

“You can show an image more than once without needing multiple slides, and do wonderful things with images, like zooming in for details, or changing the color of the background,” he says. Ostrow came here from a university that worked only with slides; he was excited that the U was technologically way ahead of most institutions. “We have a remarkable database of images,” says Ostrow, who made the leap to PowerPoint with help from Moss.

One of the most revolutionary aspects of the new database is increased access, especially for students. Previously, undergraduates could see slides only as they were presented in class; now they can review images any time on the course Web page. For research purposes, students can access any image in the Digital Content Library with their username and password.

A challenge associated with digitization is the potential isolation of both students and faculty members.

“In the old days, we would sit around the slide library while preparing our lectures and chew the fat with colleagues. Now it’s a more solitary process, but also more economical,” says Ostrow.

Faculty member Jane Blocker has found that students often become silent during sophisticated PowerPoint presentations and sometimes think that if the materials are on the Web site, they don’t need to come to class. “Students easily slip into roles as passive consumers,” she says. So Blocker frequently has PowerPoint-free days, filled with activities that require her students to interact with her and one another.

Moss, too, realizes that technology is not a panacea—and is no substitute for the vitality of the classroom. Ultimately, she says, “students will always need guidance to interpret effectively the images they encounter.” It’s in sharing perspectives with others—both professors and other students—that students’ personal insights morph into the richer understanding that art history is all about.

Edited from Quadro, a newsletter by the Department of Art History.