Under the microscope they’re lively, green, and even cute in a microorganismal kind of way. They’re the one-celled algae called Chlamydomonas, and they’ve become the latest repository of hope for an economical way to curb water pollution and greenhouse gas emissions.

The operative word is “economical.” Whether the algae—dubbed “Chlamy” for short—can perform on a large enough scale to make a dent in either problem is unknown. To find out, the University, the Metropolitan Council, and Xcel Energy are funding a project to grow the algae on municipal wastewater and test their ability to both remove pollutants and make significant quantities of oil that can be turned into fuel.

Spearheading the project is Roger Ruan, a professor of bioproducts and biosystems engineering and director of the Center for Biorefining. In his laboratory on the St. Paul campus he keeps large flasks holding bubbling green cultures of Chlamy, all fed on wastewater from the Metro Plant just south of St. Paul.

Ruan and his colleagues are testing Chlamy and other types of algae—including some marine species—to see which is best for the job and then, sometime this year, install a small pilot project at the Metro Plant.

The algae, like other green plants, need nutrients like nitrogen, phosphorus and carbon dioxide, the most important greenhouse gas. All these are either found in the wastewater or produced at the plant by sludge burning, and their removal from the waste stream would help the state meet clean water standards. And then there’s the oil.

“Algae can produce a lot more oil, plus remaining biomass, than other crops,” says Ruan. “About 5,000 gallons per acre of pond per year is realistic. That’s 100 times as much oil as we can get from soybeans. The current Chlamydomonas species we have are about 20 percent oil by weight.”

The algae use the oil as an energy source and also to help them float. Currently, they are being grown in ponds in warm-weather states. That’s obviously a problem for cold-weather states like Minnesota, and evaporation is also an issue, so Ruan uses a hybrid system that combines an open pond with a greenhouse and circulation system. The University is in the process of patenting the system engineering.

Another sticking point with algae is their need for light, which only penetrates about 10 centimeters (about four inches) into an algae pond. That means ponds must cover a lot of area. To shrink their size, one must increase their depth; therefore, Ruan is looking for ways to supply the contents of a deeper pond or tank with sufficient light. Running the algae through transparent tubing, using low-energy LED lights and natural light in a greenhouse, and the hybrid system are three avenues he’s exploring.

“This is a great instance of what I’ve been trying to get our people to do, which is to get closer to real time in harnessing energy from photosynthesis,” says Robert Elde, dean of the College of Biological Sciences and chair of the IREE executive committee.

After the algae are harvested, Ruan can dry them, extract their oil to make biodiesel fuel, and use the remaining biomass to make biooil. Or, the biomass can be anaerobically digested to produce methane, but that takes too long—at least 15 days. 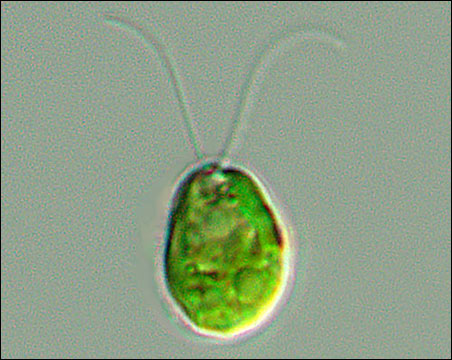 Photo by Brian Piasecki
The one-celled alga called Chlamydomonas is a potential recycler of waste nutrients and carbon dioxide, as well as a producer of usable oil. This image was taken at 1,000 magnification.

To streamline the process, Ruan and his colleagues are developing a process to first compress the cells, then rapidly relieve the pressure to burst them open and liberate their oil. The oil can then be separated out, and the leftover biomass, which is mostly carbohydrate, can be heated and converted into biooil or fermented to produce bioethanol.

The biodiesel is a distant product of the algae’s photosynthesis, which locks carbon dioxide into molecules of carbohydrate. Thus, this troublesome gas will be put use as an energy source rather than being pumped into the atmosphere. And as for the waste nitrogen and phosphorus, they still will have value as nutrients. Most will be left in the final residue, which could be used as fertilizer.

The project has received $40,000 apiece from the University’s Initiative for Renewable Energy and the Environment (IREE) and Metropolitan Council Environmental Services. This month, Xcel Energy contributed another $150,000.

“This is a great instance of what I’ve been trying to get our people to do, which is to get closer to real time in harnessing energy from photosynthesis,” says Robert Elde, dean of the College of Biological Sciences and chair of the IREE executive committee.

A major benchmark for the project is lowering production costs. Ruan estimates the cost of algae-produced oil at about $20 per gallon; if that can be lowered to around $2, the use of algae could really take off.

If all goes well, Ruan says a full-scale pilot project could be in place at the plant in five years, and the technology may reach commercial use in 10 years.

The Chlamydomonas used in the study are home grown in the University’s Chlamydomonas Resource Center, a National Science Foundation-funded “bank” containing about 2,500 strains of the algae. The center is directed by plant biology professors Carolyn Silflow and Pete Lefebvre, who, along with assistant professor Tony Sanderfoot, recently played critical roles in sequencing the genome of Chlamydomonas.

“Chlamy” moves via two whiplike structures called flagella, which makes it an invaluable model organism for studies of similar structures called cilia. Cilia are found in human sperm, respiratory lining, kidney, and other cells and can cause serious illness if defective.